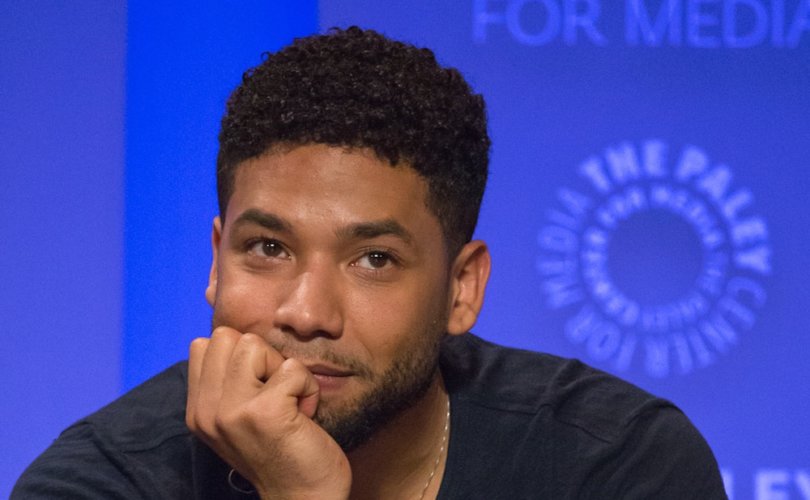 CHICAGO, March 26, 2019 (LifeSiteNews) – Observers across the country were stunned Tuesday when prosecutors dropped charges against openly-homosexual Empire actor Jussie Smollett for faking a pro-Trump hate crime against himself.

Two potential “attackers” were soon identified, but rather than pro-Trump whites they were a pair of Nigerian brothers with ties to Empire. It was then reported that police suspected Smollett of paying them to stage the attack, and Smollett was officially charged in February with filing a false police report.

Smollett was later indicted on 16 counts of disorderly conduct stemming from the offense, but all of those have now been dropped, USA Today reports.

“After reviewing all of the facts and circumstances of the case, including Mr. Smollett’s volunteer service in the community and agreement to forfeit his bond to the City of Chicago, we believe this outcome is a just disposition and appropriate resolution to this case,” the office of Cook County State's Attorney Kim Foxx said in a statement.

Foxx recused herself from the case for contacts with Smollett’s family, after which deputy Joe Magats took over. Tandra Simonton, a spokesperson for Cook County prosecutors, declined to elaborate on the rationale for dropping the charges.

“I have been truthful and consistent on every single level since day one,” Smollett declared in a statement, calling the “incredibly difficult time” one of the “worst of my entire life” and claiming he wants “just to get back to work and get on with my life.”

It was previously reported that Smollett’s motive in faking the attack may have been fear that 20th Century Fox was going to cut him from Empire, and the studio’s latest tweet suggests it may be standing by him:

STATEMENT FROM 20TH CENTURY FOX TELEVISION AND FOX ENTERTAINMENT: “Jussie Smollett has always maintained his innocence and we are gratified that all charges against him have been dismissed.”

Other Chicago leaders have vocally expressed their disgust with the decision, particularly Democrat Mayor Rahm Emanuel and Police Superintendent Eddie Johnson at a Tuesday press conference.

BREAKING: Chicago Mayor Rahm Emanuel on dropping of Jussie Smollett charges: “This is a whitewash of justice.” https://t.co/B2ahaJSxt3 pic.twitter.com/UI65nAD8Rp

Johnson blasted prosecutors for allegedly “hiding behind [court] secrecy to broker a deal to circumvent the judicial system […] Do I think justice was served? No. What do I think justice is? I think this city is still owed an apology.”

PJ Media adds that the Fraternal Order of Police (FOP) is calling for an investigation into what influence Foxx exerted over the case. Tina Tchen, former chief of staff to former first lady Michelle Obama, texted Foxx on February 1 to relay the Smollett family’s “concerns about the investigation.” Foxx responded with an email assuring her she had asked Johnson to “Reach [sic] out to FBI to ask that they take over the investigation.”

“Private attorneys are not allowed to interfere with ongoing police investigations, particularly at the request of private individuals associated with subjects being investigated by the police, in this case, a subject later determined to be the offender, not the victim,” FOP president Kevin Graham wrote in a letter to U.S. Attorney John Lausch.

“Ms. Foxx ultimately recused herself from this case as a prosecutor based on those communications with relatives of Jussie Smollett,” but that recusal is wholly insufficient,” Johnson argued. “In order for Ms. Foxx to properly charge and try this case, her entire office should have recused itself and a special prosecutor been appointed.”

Some conservatives are also raising questions over the support Foxx's political career has received from one of the Left's most notorious benefactors. Breitbart reports that in 2016, “progressive” financier George Soros donated $333,000 to the pro-Foxx Illinois Safety & Justice super PAC in Foxx's primary campaign against incumbent Anita Alvarez, and an additional $75,000 after her victory.

Soros is known for funding a wide variety of Democrat causes, but in recent years he has expanded efforts to sway local elections across the country in hopes of replacing traditional “law and order” prosecutors with more liberal candidates.

Backing Foxx “marks the first time Soros has entered into a political race in Illinois—ever,” Chicagoist reported at the time.