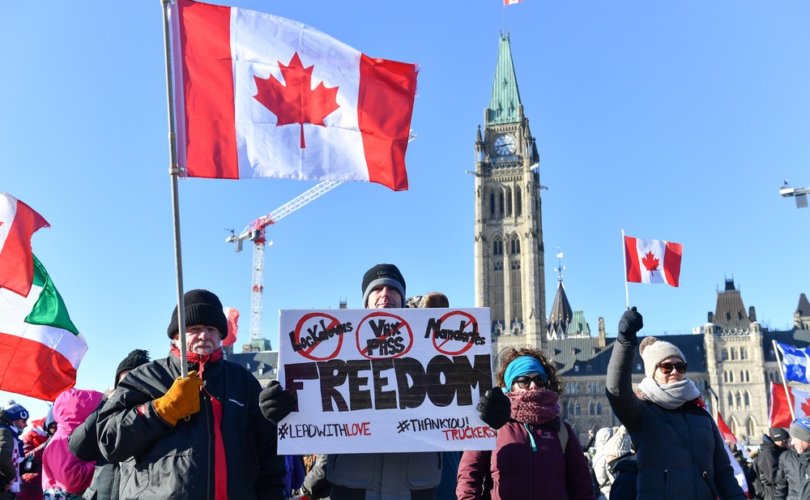 OTTAWA (Justice Centre for Constitutional Freedoms) — The Justice Centre is pleased to announce that the charges against freedom convoy protestor J.W. were dropped on November 18, 2022. J.W. was a participant in the peaceful protest in response to the invocation of the Emergencies Act in February of 2022.

The Freedom Convoy was a peaceful demonstration that protested the trucker vaccine mandates the Trudeau government imposed in January 2022. In response to the peaceful demonstrations, the prime minister took the unprecedented step to invoke the Emergencies Act on February 14, 2022, to suppress the peaceful protests, and freeze bank accounts of protestors without a court order.

On February 19, 2022, J.W. was charged with interfering with the lawful use and enjoyment of property of downtown Ottawa residents, failure to obey a court order, and obstruction of justice for failing to identify himself to police.

The court order J.W. allegedly disobeyed was made under the provincial declaration of emergency, to deal with the Windsor bridge blockades. The order was created specifically to clear the Windsor blockades and counsel argued that it was an abuse to use the order for any other purpose. The Crown agreed and withdrew all charges.

There was also a lack of evidence that J.W. actually interfered with the lawful use and enjoyment of property.

Finally, there were no police notes stating that J.W. failed to identify himself to police, that could amount to obstructing police.

All charges against J.W. have now been dropped.

As required by the Emergencies Act, a public inquiry commission was established to determine the justification for invoking the Act. The Justice Centre was granted full standing at the commission and cross-examined witnesses, including Prime Minister Justin Trudeau. Witness testimony ended on November 25, 2022. The Commissioner is expected to release his report in February 2023.