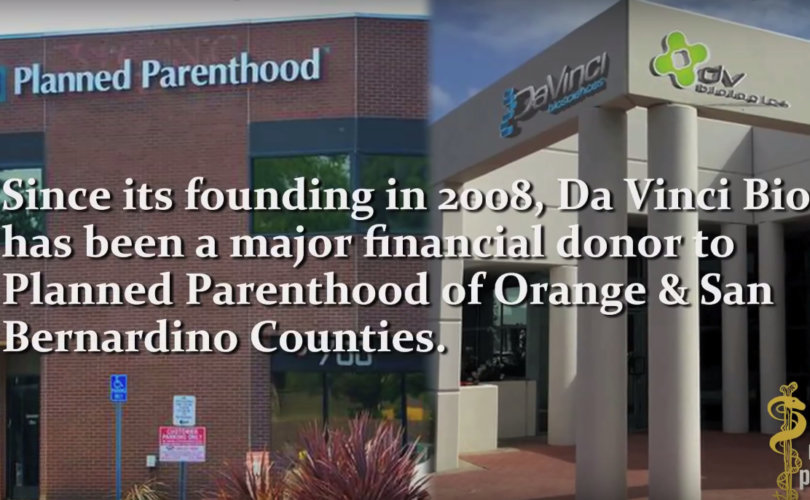 The sister companies facing charges are DaVinci Biosciences and DV Biologics, the latter of which the Center for Medical Progress (CMP) exposed as partnering with Planned Parenthood to collect potentially “intact” fetuses using illegal partial-birth abortions.

“The wheels of justice are beginning to turn against Planned Parenthood and their corrupt business partners in the illicit trade in aborted baby body parts,” CMP’s project lead David Daleiden said.

“As intact as possible,” the buyer replied.

Russo said “we like to” use an ultrasound-guided partial-birth abortion to flip preborn babies to a feet-first position in order to deliver them intact for better body parts harvesting. “It [getting an intact baby] happens sometimes, but it’s pretty rare. But we try,” she told the CMP investigator.

Rackauckas said the lawsuit is “not about politics” but “about a clear violation of the law.”

The Orange County Register reported that the lawsuit says DaVinci Biosciences and DV Biologics “hired sales and marketing staff and pushed them to meet revenue goals through offering discounts and coupons. … From 2009 to 2015, the companies collected $56,678 in ‘packing and handling’ fees marked up by roughly 50 percent over the actual cost of packaging and handling. … Employees were paid a commission on profits they earned from the packing and handling charges.”

When it first exposed DaVinci Biosciences, CMP reported that the company charged $350 for fetal liver, $500 for fetal thymus, and $750 for fetal brain.

Meanwhile, California Gov. Jerry Brown just signed a bill that punishes pro-life investigators with up to a year in jail and fines for secretly recording Planned Parenthood, even if the recordings expose illegal activity.