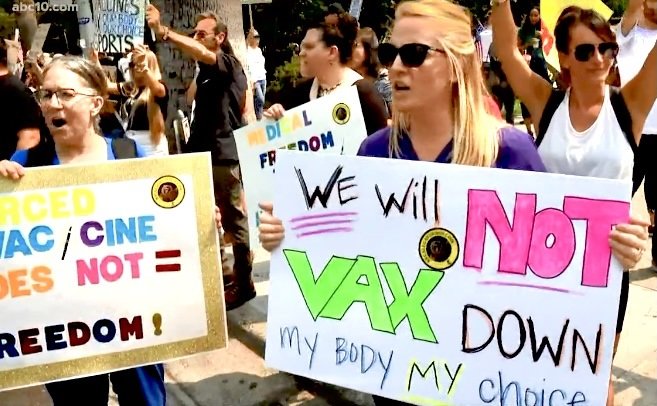 (LifeSiteNews) – Protests against COVID-19 vaccine requirements are erupting across the United States in response to a wave of mandates issued by lawmakers and employers in recent days.

Hundreds of demonstrators, including nurses and healthcare workers, gathered at the California state capitol in Sacramento for a protest against vaccine mandates on Monday, after around 1,0000 people joined a similar rally in nearby Roseville last week, according to the Sacramento Bee. Other protests have been reported in Los Angeles and Orange County.

Healthcare workers and other supporters are at the California Capitol right now protesting the vaccine mandate. Some folks here have told me they’re not against the vaccine itself, but they are against the state mandate which requires vaccination or weekly testing. @ABC10 pic.twitter.com/D7tsUtWiim

“When patients come in for procedures, we give them the choice whether or not to submit to the procedure we’re recommending and so they have the right to refuse,” said one nurse at the Sacramento protest. “That’s in their patient consent form and we just want that same right.”

“You know, if we feel the vaccine’s not right for us, we should be able to make that decision for our own body,” she continued. “We never gave up medical autonomy to anyone else. We have autonomy over our own bodies to give ourselves what we feel is proper medical treatment for our condition. And if we don’t want the vaccine, we shouldn’t have to take it.”

Along with Newsom, nearly every other Democratic governor has announced COVID-19 vaccine requirements of some kind in the past month. The Biden administration has likewise rolled out requirements for the military and federal workforce while major companies like Walmart, Cisco, and Amtrak, and one-third of hospitals have done the same for their employees.

“We’re talking about it,” Sacramento mayor Darrell Steinberg said Friday. “I know where I stand, but we’re talking about it together because these are the kinds of decisions that ought to be made with the other leaders, the business leaders of the community.”

“I think a fair number of businesses would rather require a vaccine than be shut down again, with cases going up this way,” a spokeswoman for the mayor added.

Mass protests against vaccine mandates have broken out in Kentucky as well, where around 1,000 people rallied at a hospital in Edgewood last week against a vaccine mandate for staff, the Springfield News-Sun reported. Employees at St. Elizabeth Healthcare have until October 1 to show that they are “fully vaccinated” against coronavirus.

“I want the community to understand we genuinely care about our patients,” said a nurse with St. Elizabeth Healthcare. “They’re going to lose a lot of nurses. I think a lot of these hospitals think we’re just going to sit there and take it. I can tell you right now, everyone I know that’s not vaccinated, their plan, they’re going to have to fire us. I’m not walking out willfully.”

Over 1000 people showed up in NKY to oppose forced vaccinations today. I support health care workers who were praised last year but are now being told they’ll be fired if they don’t get the Covid vax. @SavannahLMaddox has filed a bill to prohibit employers from requiring the vax. pic.twitter.com/keueKKNBB5

“Over 1,000 people showed up in NKY to oppose forced vaccinations today,” Kentucky Rep. Thomas Massie tweeted Thursday. “I support health care workers who were praised last year but are now being told they’ll be fired if they don’t get the Covid vax.”

Thousands of Maine protesters have gathered in Portland, Augusta, and Bangor since Democrat Gov. Janet Mills ordered that all healthcare workers in the state must receive COVID-19 shots by October. Organizations that run afoul of Mills’ dictate, which does not include a testing option for refusers, risk losing their state licenses, according to News Center Maine.

Several hundred people, many of them wearing scrubs, protested at Maine’s capitol on Monday, local news reported. Republican leaders headlined another large protest at the state house on Tuesday.

Demonstrations have likewise picked up in Washington after Democrat Gov. Jay Inslee announced a mandate for healthcare and state employees last Monday. Thousands assembled in front of the state capitol on Friday, some calling for Inslee to be impeached or recalled.

Around 1,000 people took to the streets in Oregon against vaccine requirements the next day.

Washington protests have persisted into this week, with hundreds again rallying at the capitol yesterday against a new vaccine mandate imposed by Inslee for teachers.

The crowd has entered the Capitol where @GovInslee’s press conference is being held. The group is chanting, “Recall Inslee.” pic.twitter.com/hKOf96DnNV

Hundreds of people similarly gathered at the Oklahoma state capitol last weekend to protest vaccine and mask requirements and to urge Gov. Kevin Stitt to take action against employer-based mandates.

I’ve made it inside the Capitol. Plenty of people still in line waiting to get in https://t.co/u4laoWCb5i pic.twitter.com/6ECyJr2emB

Stitt, a Republican, previously signed an executive order prohibiting state agencies from requiring proof of vaccination status for access to government facilities. Nearly 20 lawmakers asked the governor in July to call a special session to ban vaccination requirements by private businesses, which he has yet to do.

Demonstrators at what was dubbed the “Oklahoma Freedom Rally” on Saturday held signs that read “Protect our freedom” and “Mandate medical freedom,” Fox News reported.

“I have suited up in PPE, gone out to people’s cars, swabbed them and then unsuited, taken specimens back to the laboratory, and then suited up again and tested them for COVID,” a phlebologist at the event told FOX 25. “I have been doing this for two years, and now all of a sudden they’re pushing this vaccine or they are going to take away my livelihood.”

Rallies against coercive COVID-19 vaccination have sprung up in virtually every other state in recent weeks, including in Michigan, New York, Wisconsin, Minnesota, Missouri, Texas, Ohio, and Florida. The widespread protests, often organized by nurses and fellow healthcare workers, have nevertheless been given little to no mainstream media coverage.

Protesters in other Western countries, like France and Italy, have been taking to the streets by the hundreds of thousands and millions against public health dictates for over a month.

Florida, Alabama, and Texas have prohibited businesses from requiring proof of vaccination for customers, according to Ballotpedia, though employers continue mandating COVID vaccines in all three states. Montana remains one of the few states with a ban on employer-based coronavirus vaccination mandates.