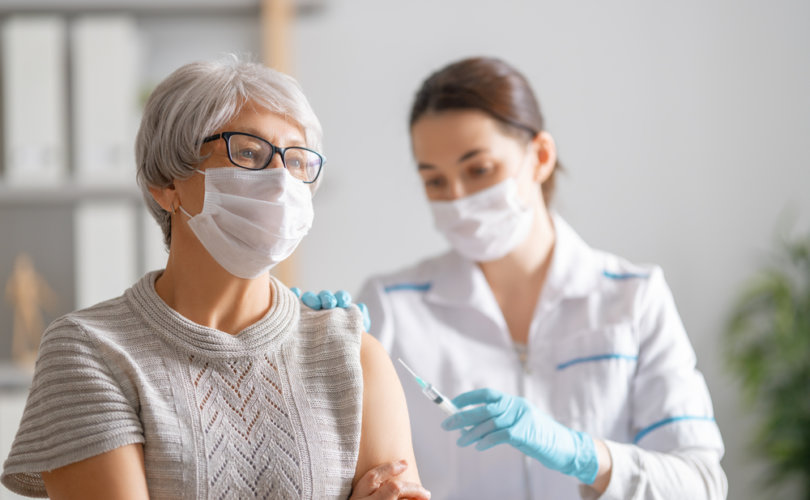 HANOVER, Germany (LifeSiteNews) — Fifteen protestant theologians have signed an open letter to their church leader expressing their opposition to mandatory vaccination against COVID-19.

“We ask the Evangelical Church in Germany to publicly declare its opposition to legally enforced vaccination with genetically engineered products … and to warn politicians from treading a slippery slope,” the letter read.

Dated December 16, the letter was co-authored by Jan Dochhorn, Harald Schwaetzer and Henrieke Stahl, and was signed by twelve other protestant theologians and pastors. It was addressed to Annette Kurschuss, President of the Council of the Evangelical Church in Germany (EKD).

Vaccine mandates currently in place in parts of Germany allow only for vaccinated people or people who have recovered from COVID-19 to access certain venues. Even the presentation of a negative COVID test is no longer sufficient. This is called the “2G” rule and applies to different venues depending on the state.

German lawmakers are also discussing the introduction of a vaccine registry and the enforcement of a mandatory vaccine policy similar to that of Austria.

Against such measures, the authors of the letter started with an appeal to the notions of informed consent and freedom of medical treatment.

“In the present situation, the Evangelical church should make it clear to politicians and citizens that there is a world of difference between deciding freely to get vaccinated to protect others as well as oneself on the one hand, and being coerced to do so by political mandate on the other,” they wrote.

According to the authors, vaccine mandates violate freedom of conscience as well as the constitutional order.

“Nothing good can come out of tampering with the precious gift of freedom in Germany,” they claimed. “Beyond the future of the country, it’s the credibility of every individual, and not least that of the Evangelical Church, that is at stake here.”

The authors of the letter then listed four main reasons for their opposition to the vaccine mandate in Germany.

First, they argued that the genetically engineered vaccines against COVID-19 “are still only conditionally approved,” and what is known about them, namely that they have “little effect against the disease,” and that “they carry quite considerable risks,” means that a mandatory vaccination policy would be unreasonable.

“What is planned is a coercive measure that the state would only be allowed to take in cases of extreme emergency and with precise knowledge of the effectiveness of the measure. However, [the measure] is being promoted by decision-makers who have obviously been insufficiently informed,” they argued.

In their second point, the authors made a thinly veiled reference to policies of Nazi Germany when speaking about how unvaccinated people, or people opposing vaccine mandates, have been portrayed by some politicians and the mainstream media; arguing that “not for the first time in German society have politicians been encouraging a trend to identify as scapegoats a particular group of people who are to blame for ‘our misfortune.’’’

Thirdly, the authors pointed out that any criticism of the government’s health policies has been frequently censored and “excluded from public debate,” “de-platformed on social networks,” and “defamed in personal interactions.”

In their fourth and last point, the author questioned the German government’s ability to deal with the COVID crisis over the past 2 years.

“Why have beds been cut in intensive care units? Why has there not been more targeted investment in protective measures for nursing homes and other sensitive locations, for example?” they asked. They added that “administrative failure is now coupled with an increasing tendency toward coercion, control and criminalization of opposition; characteristics of a policy that has abandoned a functioning free democratic basic order.”

The authors concluded the letter by asking the leadership of the EKD “to express something other than what pleases the powerful.”