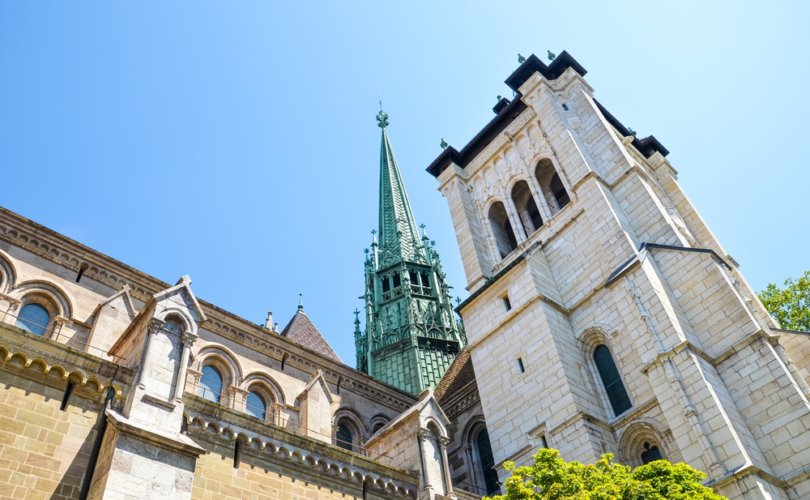 The exterior of Saint-Pierre Reformed Protestant Cathedral, which was originally built as a Catholic cathedral. It later became the adopted home church of John Calvinshutterstock.com

GENEVA, February 4, 2020 (LifeSiteNews) — The first Catholic Mass in Geneva’s cathedral since the Reformation takes place at the end of this month and Protestants have been invited to attend and receive Holy Communion.

Moreover, although Catholic Church canon law does not permit intercommunion, it is reportedly a common practice in Geneva, according to Swiss Protestant news agency Protestinfo.

Fr. Pascal Desthieux, Catholic episcopal vicar for the canton of Geneva, will say Mass in Saint-Pierre Reformed Protestant Cathedral at 6:30 p.m. on February 29, at the invitation of the Protestant cathedral’s parish council.

Mass was abolished in the nearly 900-year-old church in August 1535 after iconoclasts desecrated and razed the interior, slashing images and breaking statues deemed to violate the new Reformed cult they had accepted, Protestinfo reported.

The cathedral subsequently became notable as the home church of Reformer John Calvin, and his triangular chair is still kept next to the pulpit.

The decision to invite Fr. Desthieux to say Mass in Saint-Pierre began as informal talks followed by an ecumenical service in the cathedral, which then “matured” into a discussion and a council vote, said parish council president Daniel Pilly.

“There was no opposition, which is significant. The idea appealed because it corresponds to our desire to make the cathedral a meeting place for all Geneva Christians. A space that transcends confessional boundaries,” he told Protestinfo.

Protestants have been invited to attend the Mass and to receive Communion, but “this is nothing special in Geneva,” Pilly said.

“This is already done locally in many parishes during ecumenical celebrations where Protestants and Catholics invite each other to the Lord's Supper and to Communion,” he said.

Catholics have previously been invited to ecumenical services at Saint-Pierre, and the parish council also allowed Lutherans to celebrate Confirmation on Pentecost Sunday when their church was closed for renovations. For several years, Anglicans sang carols at the cathedral at Christmas, Protestinfo reported.

Emmanuel Fuchs, president of the Protestant Church in Geneva and a pastor in Saint-Pierre, told Protestinfo that the invitation is “a signal that the climate in Geneva is extremely favorable and fruitful with the Roman Catholic Church. We have made notable progress in terms of ecumenism, especially with the Joint Declaration, signed in 2017, which recognizes our respective ministries.”

Added Fuchs: “As Pope Francis said, ecumenism is achieved by walking. We are trying to walk together in the hope that when we have made enough progress, the obstacles that seem to us today insurmountable will no longer be.”

However, the Catholic Church cannot sanction intercommunion between Catholics and Protestants, as prominent clerics such Cardinal Robert Sarah, prefect of the Vatican’s Congregation for Divine Worship, Cardinal Raymond Burke, and Archbishop Athanasius Schneider have frequently reiterated.

Cardinal Sarah has described Communion by those who do not profess Catholic faith as “sacrilegious” and an “outrage” against the sacrament.

“Intercommunion is not permitted between Catholics and non-Catholics. You must confess the Catholic Faith. A non-Catholic cannot receive Communion. That is very, very clear. It’s not a matter of following your conscience,” the cardinal said in 2015.

Despite this, the Catholic bishops of Germany are renewing their push for “intercommunion,” and Pope Francis has sent mixed signals on the matter.

A September 2019 German ecumenical paper argues that theological debates in the last decades clarified differences stemming from the Reformation and there is now “agreement” regarding the “theological meaning of the Eucharist/Last Supper,” and that, “on that foundation, the diversity of liturgical traditions is being valued,” Maike Hickson reported in LifeSiteNews last week.

Swiss Cardinal Kurt Koch, the President of the Pontifical Council for Promoting Christian Unity, told Vatican News he disagreed with the document’s underlying assumption: “namely: that the Catholic Eucharistic celebration and the Protestant Last Supper are identical,” Hickson reported.

Meanwhile, the Holy Father told Reverend Michael Jonas, Lutheran pastor of the Evangelical Church in Rome, that “Catholics and Protestants are very close to one another in what they do in their public worship [Gottesdienst],” according to comments Jonas made to LifeSiteNews.

In May 2018, Pope Francis blocked the German bishops’ proposal to allow a Protestant spouse married to a Catholic to receive Holy Communion, but then said in an in-flight press conference shortly afterward that it is up to individual bishops, and not bishops’ conferences, to decide the matter.

In 2015, he made comments to a Protestant wife of a Catholic, which appeared to “suggest,” in the words of National Catholic Register Rome correspondent Edward Pentin, “that a Lutheran wife of a Catholic husband could receive Holy Communion based on the fact that she is baptized and in accordance with her conscience.”