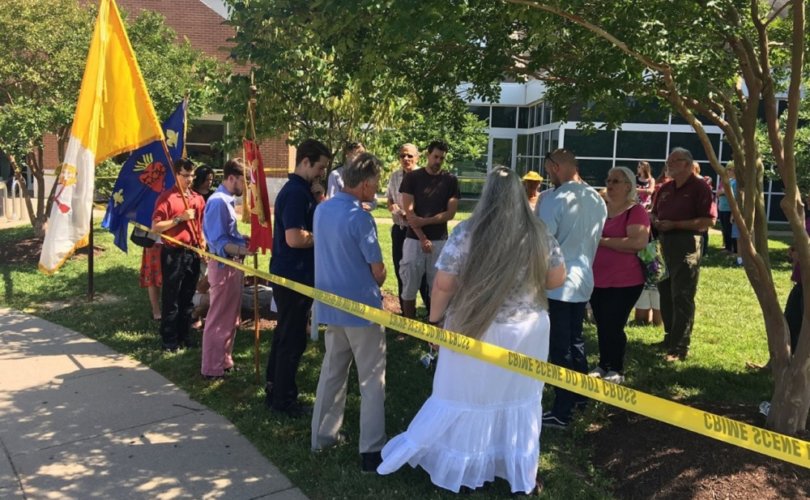 LEXINGTON PARK, Maryland, June 27, 2019 (LifeSiteNews) — On the Feast of Corpus Christi, Christians stood praying outside a library as a “Drag Queen Story Hour” event for kids went on inside.

Although a local newspaper, the St. Mary’s County Times, reported a few weeks ago that over 100 children had been registered by their parents to attend the event, only about 30 showed up.

The simultaneous prayer vigil and rosary attracted more people than the drag event. About 100 Christians showed up throughout the day “to pray in reparation for the violation of childhood innocence and for the conversion of parents who’ve abandoned their God-given role as protectors of their children by bringing them to this depraved event,” according to Father Kevin Cusick, pastor of St. Francis de Sales Parish.

The event began with a one-hour session consisting of men outlandishly dressed as women reading “gender-fluid” books to 3- to 8-year-olds, including Free to Be Incredible Me by Joelle-Elizabeth Retener, This Day in June by Gayle Pitman, and Neither by Arlie Anderson.

It is unclear if a planned second two-hour session took place in which drag queens were to teach “tweens & teens” how to apply drag queen–style make-up.

Father Cusick, pastor of St. Francis de Sales Parish in neighboring Charles County, Maryland, was the sole priest to attend the Rosary Rally. A dozen of his parishioners joined him. No priests from the 15 Catholic parishes in St. Mary’s County, where the event was being held, attended the prayerful protest.

Participants who brought Vatican and Sacred Heart flags waved them through the air as they sang Ave Maria, contrasting with a few drag queen–supporting counter-protesters who danced around and sang “YMCA” and “We Are Family” loudly, hoping to drown out those who were praying.

Public involvement made a difference

Kijesky attributed the anemic turnout for Drag Queen Story Hour to nationwide attention focused on the event. In particular, she cited:

“This is not the first time Lexington Park Maryland Library has pushed sexual perversion on children,” Kijesky told LifeSiteNews.

In 2017, sex ed classes for minors led by an LGBT activist, prostitution-promoter, and self-described “pole dancer” were offered in public libraries in Kijesky’s community.

“It is important for the taxpaying public and concerned parents of America to know that Drag Queen Story Hour is not merely an isolated incident, but a nationwide epidemic,” she said.

“The American Library Association (ALA) has willingly become an instrument to ‘sneak’ LGBT materials and events” into “small, rural, conservative” libraries in order to indoctrinate “impressionable young children.”

“The goal is to normalize abnormal, sexually deviant homosexual behavior by enticing children to first: question their sexuality,” said Kijesky. “The more children see men dressing up as women, the more normal it will become.”

“Christians must recognize that the gender revolution, like any Progressive social movement, reaches out to remove children from the influence of the Word of God and replace biblical truth with moral relativism,” said Personhood Alliance Education president Sarah Quale. “Relativism is the common thread woven into all efforts to destroy the image of God in the human person.”

“For far too long, Prolifers have been accused of only caring for children while in the womb,” said Kijesky. “Defending children from this violation to their innocence is but one of the many ways the prolife movement can prove that this notion could not be further from the truth.”