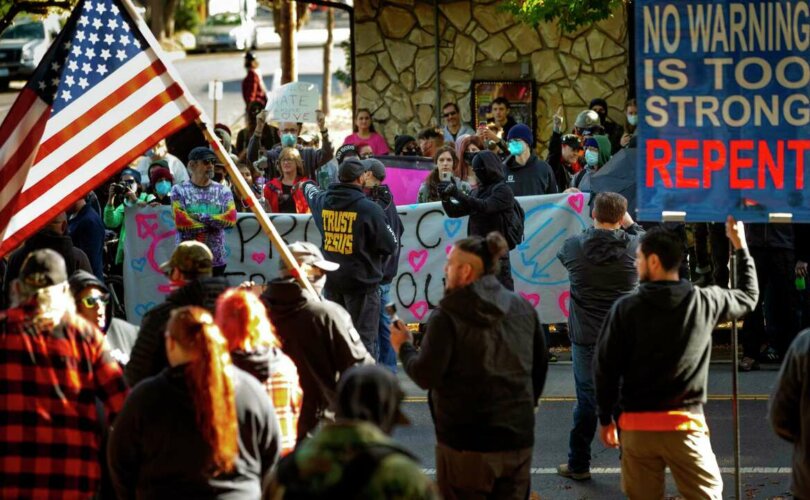 (LifeSiteNews) — A pub in Oregon attracted national attention over the past two weeks because of its plans to feature an 11-year-old performer at a drag queen story hour.

On Sunday, Old Nick’s Pub in Eugene hosted an all-ages drag queen story hour that was initially advertised to include a child performer. A crowd of 200 gathered outside the venue, consisting of protesters and counter-protesters. However, after the intense backlash, the child did not end up performing as originally scheduled.

Before the event, local police were “notified of an event” that “had drawn polarized attention and that was being publicized on social media not only locally but across the state.”

“Because opposing groups were communicating plans to attend, possibly armed,” read a statement from the Eugene Police Department. “[We] created security plans to allow for a safe environment for everyone in the community to exercise their constitutional rights and freedoms, to protect the lives and property of all involved, and prevent safety disruption to uninvolved community members.”

According to the release, groups began to arrive around 9:45 a.m. on October 23. Roughly an hour later, one road was “shut down due to the groups’ presence.” Both sides reportedly carried firearms. Later in the day, “both groups were lobbing projectiles at each other” and police “had to restrict traffic” on a second street.

Among the known injuries sustained during the protest was a woman who “appeared to have been exposed to pepper spray” and “a man who was reported down with an unknown condition.” He was treated by local emergency responders, but no further details on his injury or condition have been made known to the public.

“Throughout the event, Eugene Police had assigned Patrol, Drone Team, 911, [and] Community Service Officers to monitoring for safety.”

Opposition to the event exploded as soon as the public became aware of it and grew with an October 18 report from Andy Ngo at the Post Millennial.

According to a press release from the Fern Ridge School District, where Boren was an instructional assistant at an elementary school, the self-identified drag queen was “arrested on charges related to child pornography” in August. The district immediately fired the offender and “barred [Boren] from school grounds or having contact with Fern Ridge students pending the outcome of the case.”

Amid the uproar after the information was publicized, the family of the drag child, whose stage name is Vanellope, issued a statement that claimed the child had “no relationship beyond a professional one” with Boren and even those interactions ended as soon as Boren was arrested. Vanellope’s aunt is her “real drag mother and mentor.”

Update: Old Nick’s Pub released a statement from the “friends & family” of the child drag queen. It contains falsehoods about co-reporter @hunnybadgermom. It says she “released the name” of the child. She did not. Statement says she is in relationship w/a Proud Boy. That is false pic.twitter.com/OTCRQ9S1Ri

The pub responded by declaring that “drag is an art form. It is not an inherently sexual act to dress in drag, and those sexualizing her [Vanellope] are falling into a very typical societal trap of misogyny that views any female performance as sexual.”

Although accusing protesters of making violent threats, supporters of the event asked for donations “to help raise money for bail in anticipation of their comrades committing crimes against protesters outside the child drag queen event.”

The Corvallis, Ore. cell of #Antifa is using @Venmo/@VenmoSupport to help raise money for bail in anticipation of their comrades committing crimes against protesters outside the child drag queen event in Eugene. https://t.co/20DvHJGDzu pic.twitter.com/99v8fYUlD1

The local pub is known for regularly hosting drag events. The drag queen story hour brunch is a monthly event typically open to all ages. One of the upcoming shows is being advertised as a “Fetish Night,” which requires participants to be at least 21 years old. Another all-ages “Drag Queen Storytime” is listed on the pub’s website for November 27. The flyer for the event includes a picture of Vanellope.

The child’s former mentor is not the first drag queen to be investigated for child pornography and similar offenses. In June, Idaho police launched an investigation into a “family-friendly” drag show after a video from the event was made public, allegedly showing a dancer with exposed genitals.

Another LifeSite article published in July outlined several instances of pedophilia acts and arrests that have occurred over the past three years, including a drag queen who was charged with 25 counts of child pornography earlier this year.