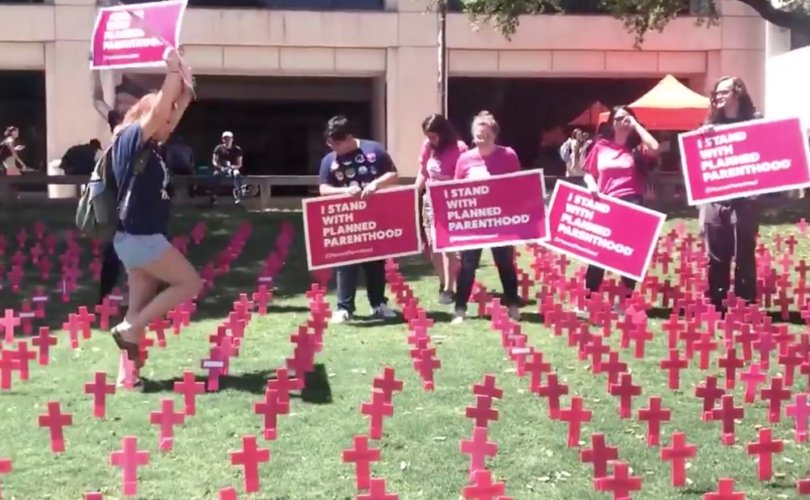 SAN ANTONIO, May 9, 2019 (LifeSiteNews) — A Students for Life (SFL) display meant to memorialize the victims of abortion was met with contempt and irreverence from pro-abortion activists at the University of Texas–San Antonio, complete with crass jokes about aborted babies and ad hominem attacks on the motives of pro-life students.

Like many campus pro-life groups participating in the Spring 2019 Planned Parenthood Truth Tour, SFL’s chapter at San Antonio has a Cemetery of the Innocents display on the grounds, comprising pink crosses meant to denote 911 innocent lives lost to abortion. On May 1, SFL revealed the details of an April 9 incident in which members of the group Students United for Planned Parenthood (SUPP) vocally disrupted observation of the memorial.

“Some of the members approached us, but would not dialogue. They just wanted to shout their points at us,” wrote Sarah Zarr, SFL’s Texas regional coordinator. “One girl told me I was using my ‘white privilege’ and ‘wasn’t allowed to be out there talking about this issue when it affects black women.’ A few members did speak with us, but when they couldn’t think of a response to what we said, would get mad and walk off.”

Later on, a group returned to stand in the middle of the display bearing “I Stand With Planned Parenthood” signs. “A girl ran out into the grass yelling ‘I’ve had an abortion,’” Zarr wrote,” while others launched chants such as “Hey, stop, what’s that sound, all the fetuses are in the ground.”

This is one of the most infuriating things I've ever seen:

Planned Parenthood supporters sing chants in a “fetus graveyard” at the University of Texas-San Antonio setup by @StudentsforLife.

“Stop, hey what’s that sound? All the fetuses are in the ground!” pic.twitter.com/WZgHfJIIOR

The College Fix has more details about how the pro-abortion protesters conducted themselves, including additional chants such as “when I say abortion, you say fetuses!” and sarcastically pointing to specific crosses and declaring, “That one’s mine.”

“One of our main goals I strive for is to create dialogue with the student body to bring awareness and to create conversation about the reality of human life and of abortion,” said Melanie Salazar, president of SFL’s chapter at U.T.–San Antonio. “I truly believe that we are not going to change legislation until we change hearts and minds, and we will do this by simply having conversations. I am thankful for the freedom of speech to have events like this one at our campus. I believe that empowered women empower women to choose life for their preborn child and our pro-life club wants to create a culture of life that removes fear from women in unplanned pregnancies and instead leads them to resources and opportunities.”