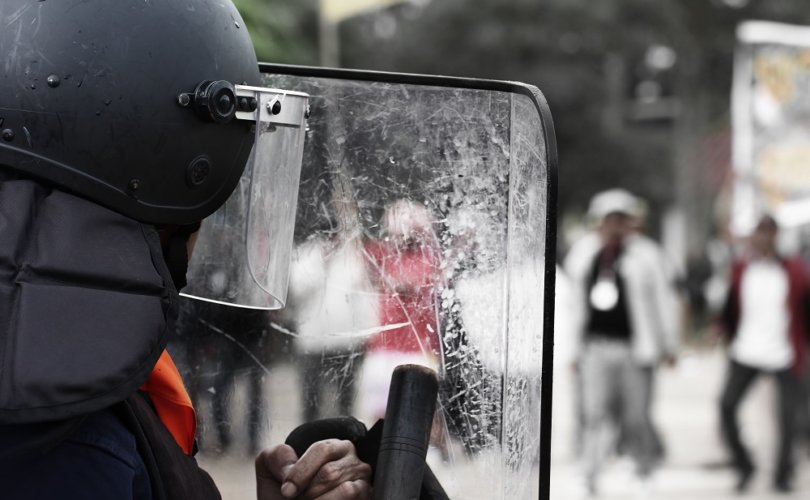 ZURICH, September 17, 2019 (LifeSiteNews) — The tenth March for Life in Zurich was marred by violent leftist anti-life protesters, of whom police arrested at least 175, some of whom were charged with resisting authorities and violence.

Peaceful pro-life advocates marched under the motto “Thank you for allowing me to live!” in the Swiss metropolis on Saturday. Pro-life activists from Austria, Germany, and Poland joined the march, which had more than 1,200 participants. Pro-lifers turned out with banners that called for a return to protection for unborn human life.

According to local reports, despite a heavy security presence to protect the pro-lifers, counter-protesters turned violent. In the past, pro-life advocates had had to cancel events because of threats of violence. The website for the march proclaimed the value of human life, including the lives of people with Down syndrome, who are often targeted for eugenic abortion. The website stated, “[W]e showed the joy in the lives of people with Down syndrome with pictures and music and took a look into their everyday lives.” Bishop Peter Bürcher said at the march, “People with Down syndrome, like all of us, have the right to live for a single, but always valid reason: because they are human, inviolable persons, God’s creatures, created according to his image and likeness.”

Unlike the pro-life marchers, the pro-abortion forces did not have a permit for their protest, according to the Swiss Broadcasting Corporation. While police said they could rally in a nearby park, they had no permit for their own march. Pro-abortion counter-protesters threw bottles and stones at police, injuring two. Police fired rubber bullets and irritants at the counter-protesters and their unauthorized march. Police also separated the two groups, and briefly stopped the pro-life march. The progress of the march recommenced by 3:45 P.M. local time.

Counter-protesters set several refuse containers on fire and blocked streets with debris. They also attacked firefighters who came to put out the blaze. Some of the firefighters were injured by the pro-abortion forces. According to 20 Minuten, a police vehicle was seriously damaged in the affray.

The Young Socialists, known as Juso, were apparently involved. According to 20 Minuten, the group expressed disappointment that the police responded with force. The outlet reported a statement by Juso’s co-president Anna Luna Frauchiger: “It cannot be that Christian fundamentalists in Zurich can spread their hate.” She claimed that her group is nonviolent and not involved in illegal acts.

Despite a petition circulated by Christians in February, the Swiss government appeared unmoved to restore protections for unborn human life. The petition had 24,000 signatories, who requested that the Swiss government “raise public awareness about the consequences of abortion.” According to the petitioners, hospitals and abortion centers offer only one-sided information about abortion and its consequences.

Mothers seeking an abortion in Switzerland must sign a form during a medical consultation setting out reasons for the abortion. Doctors are required to provide information about the physical and psychological effects of the procedure and provide a list of counseling centers and information on adoption. Girls under the age of 16 must be directed to a designated center for guidance. While 95% of abortions in the country take place during the first trimester, abortion is legal beyond the 10-week limit if the health of the mother is deemed endangered.

According to the Swiss Broadcasting Company, there were 528 late-term abortions carried out in Switzerland in 2018 out of a total of 10,457. Switzerland also allows assisted suicide.