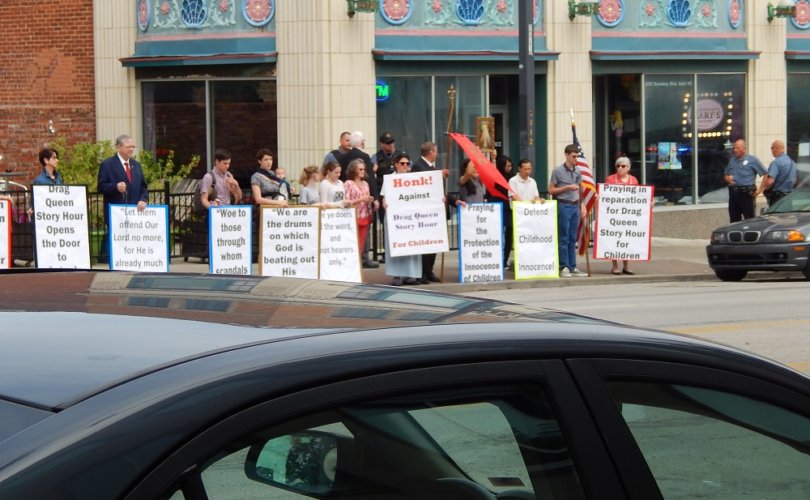 September 9, 2019 (LifeSiteNews) — A prayer protest is planned against the drag queen story hour scheduled for this coming Tuesday evening at the public library in St. Joseph, Missouri.

The public library in the northwest Missouri city joins others across the U.S. and elsewhere in hosting cross-dressing adult males reading stories at an event that has historically been geared toward instilling a love of reading in children.

“I was horrified to see that a conservative Midwestern city like St. Joseph would hold such an event, especially at a city named after a saint,” Francis Slobodnik told LifeSiteNews.

“Drag queen story hours are a form of child abuse”

Slobodnik, district manager for The American TFP and America Needs Fatima, is among those opposed to the drag queen story hour at the Missouri library.

He will drive the one and a half-hours from his Topeka, Kans., home to lead a rosary of reparation at the downtown branch of the St. Joseph Public Library Tuesday at 5:30 P.M. The drag queen story hour is scheduled for 6 P.M.

“I tell everyone I can that drag queen story hours are a form of child abuse,” he told LifeSiteNews. “It is child abuse to manipulate and confuse a child’s mind, especially about something fundamental as to who they are.”

“The drag queen story hour is seeking to destroy children’s innocence by featuring adult males dressed as women reading to impressionable children,” Slobodnik’s material on the rosary protest states. “The program features drag queens in often suggestive and vulgar costumes. These men have access to children in order to read books that promote the homosexual lifestyle.”

“We are trying to groom the next generation”

Slobodnik quotes Dylan Pontiff, a drag queen who’d helped organize a drag queen story hour at the Lafayette Public Library in Louisiana in October 2018, and who made the shocking admission before the Lafayette City-Parish Council during a Sept 2018 meeting that the events enable drag queens to groom children for LGBT acceptance.

A drag queen in England was caught on camera last month teaching small children at a library story hour how to perform the sexually suggestive dance move known as “twerking.”

Last October, children at a Portland, Ore.–area drag queen story hour were allowed to roll around on the floor and lie on top of the drag queen. Following the report, the Multnomah County Library deleted the photos from its Flickr account.

In July, the American Library Association’s national conference presented workshops to librarians from across the country that included strategies for incorporating gender identity ideology in schools and finding ways to bring drag queen story times into public libraries in the face of objections from local communities.

Last month, the Wichita library board was divided over whether to disqualify convicted sex offenders from presenting at its libraries.

In this installment of Celebrating All of Us, we are celebrating our LGBTQ+ community and everyone’s inner child will be allowed to play! Children are naturally more accepting; loving their friends and family regardless of how they may be different from others. We also want young people to feel confident in who they are, that they can be what and who they want to be. Come listen to a fabulous Drag Queen read some stories and host a dance party!

Slobodnik learned some weeks ago that a branch of the St. Joseph Public Library was hosting a drag queen story hour and immediately contacted the library director, the mayor’s office, and all city council members, urging them for the sake of the innocent children to cancel the event.

“I do not live in St. Joseph, however I do live in America,” he wrote to the public officials. “I am greatly concerned about the moral decline of America and its impact on innocent children.”

“Even though the moral decline is national in scope, generally it has not been as disastrous in certain parts of America such as the Midwest,” Slobodnik said.

“I can’t believe that such a disgraceful, disgusting event would be held in a city named after a Saint in a public taxpayer facility!” he continued. “I urge you for the sake of the innocence of children to do all that you can to prevent this from happening.”

“Who can gauge the damage that such an event will have on anyone who attends?” Slobodnik asked.

The response he received from St. Joseph Public Library director Mary Beth Revels said the drag queen story hour is part of an “ongoing family diversity series” called Celebrating All of Us.

“The series seeks to highlight different minority communities within our larger community and celebrate them,” Revels’s response said. “Our purpose for this series is to welcome all members of our community and reinforce that the library is for everyone.”

Other programs in the series have been geared for the deaf community, the blind community, and families with children with Down syndrome. The October program is themed to celebrate immigrants in the community.

Revels’s response also mentioned that drag queen story hour is “not a program only for children[.] This is a family program where any children in attendance will be with their families.”

St. Joseph City councilman at large Brian Myers told Slobodnik via email, “I think Drag Queen Story Hour is a wonderful event, and I’m proud to have it at our public library.”

“Part of being an American is allowing the free expression of ideas and thoughts in public spaces,” Myers said. “As a patriot, I’m sure you respect that aspect of our first amendment.”

“I have expressed my opinions to library board members on the event,” Novak said. “The sad fact is the St. Joseph public library is a separate entity.”

While the St. Joseph City Council has no direct oversight of the library, it does approve the governing board, he noted, and should the event go forward, he said he would support a recall of the entire library board.

“Sadly this is a platform that the LBGT+ community is using to accentuate and drive their agenda,” Novak said. “While I disagree with them, federal courts have supported their views.”

“We need” to “push the envelope”

Revels told a local news outlet that the controversial event was necessary.

“I agree that we are pushing the envelope but we need to,” she said in a KQ2.com report. “The LGBT community are taxpayers. We’re providing a program for our LGBT community. It’s also an affirming program.”

The “Celebrating all of us” series is designed for families with children between the ages of 3 and 8, she said.

Revels stated, “For little kids, what they’re going to see is a beautiful woman who is reading two books to them then dancing.”

Councilman Myers created a petition in support of drag queen story hour, according to the report.

“While I do respect that some people might be against this because they feel it’s a moral issue,” he said, “at the end of the day if you disagree with something happening in a public space, you have the choice of not taking your children.”

Slobodnik organized similar protests recently, one in May in Omaha and another in June in Kansas City. He attended another in Omaha in July. Those events took place at public venues other than a taxpayer-subsidized public library. Other TFP groups have organized rosary protests elsewhere as well.

He doesn’t know what attendance at the St. Joseph protest will be, he said, but he knows that many have spread the word extensively.

Prayer protesters at the prior demonstrations encountered some mocking, hostility, and false accusations that they were blocking the sidewalks.

This didn’t matter, Slobodnik told LifeSiteNews, as “the protesters were very happy to be there to stand up for God and for the innocence of children.”

*The rosary for reparation takes place at the Felix Street downtown branch at 5:30 P.M. Tuesday*