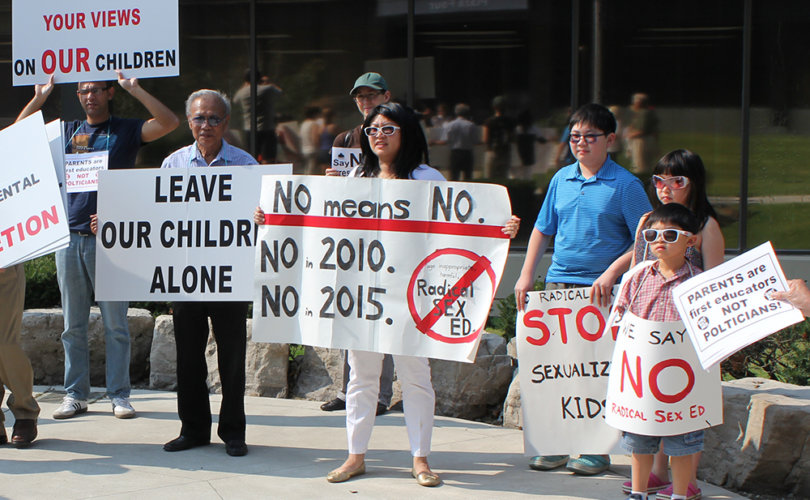 That’s the message the Canadian Families Alliance (CFA) is calling upon parents and concerned citizens to spread throughout Ontario during a day of protest planned for Saturday, May 14.

The parental rights coalition is organizing simultaneous “Car Rallies” in every electoral district across Ontario.

Car rallies have been employed successfully by CFA members in the past to raise community awareness about the fact that parents oppose the Wynne/Levin sex-ed curriculum. It also accomplishes a secondary goal of sending a powerful message to the government and opposition parties.

How a car rally works is that a designated Team Leader will map out a driving route through the community, along roads with high visibility to pedestrians and other drivers.

Drivers gather at a designated meeting place such as a church parking lot, where cars are fitted with window flags and (removable) magnetic decals.

“A caravan of cars going down the road, emblazoned with this message will get everybody’s attention,” said Christina Liu, CFA member and President of the Parents Alliance of Ontario.

There are 107 provincial electoral districts (or ridings), making this an ambitious target.  However, the CFA has proven in the past that it can hit the target.

On September 2, 2015, the CFA organized mini-rally protests at the constituency office of every MPP.  In the end, 103 out of 107 MPP offices were hit by simultaneous protests.

This generated hundreds of reports in newspaper, TV, and radio. A summary of last year’s day of protest is available here.

CFA leaders heard from sources inside the government that the ongoing parental protests “shook the Liberals” behind closed doors.

To register for a car rally in your local riding, visit the special web page here and input your postal code. Then fill out your information and hit the “Yes I’m coming” button.

Parents not giving up

CFA members are determined to continue opposition until the controversial curriculum gets repealed.  According to Liu, “We’re fighting for the best interests of children. Although we’ve awoken a lot of parents, too many still don’t realize that the true outcome of the Wynne/Levin curriculum will be sexualization – not sex education.”  Liu added, “The battle to protect very young children from irresponsible sex-ed lessons will continue as long as it takes, until it truly reflects scientific facts.”

The head of the Parents Alliance of Ontario says that the Wynne government must learn that parents will always seek to protect children from material that will harm them: “We believe the government is withholding the serious health risks associated with high risk behaviours. This curriculum puts children in harm’s way, plain and simple.”

Jack Fonseca from Campaign Life Coalition, another CFA member, explained that parents are still very much disturbed by the involvement of a convicted pedophile in the writing of the Liberal sex ed curriculum. He told LifeSiteNews that another reason parents won’t stop fighting is “because they recognize this child-sexualizing curriculum has the perverted fingerprints of Ben Levin all over it.”

Dr. Benjamin Levin is the former Deputy Education Minister under whose direction the curriculum was written. He is now serving a 3 year jail sentence for a child pornography related crime as well as a pedophilia-related crime.

“Court transcripts reveal this is exactly the grooming formula that Levin recommended to an undercover police officer in an online chat room for child molesters.”

As of publishing time, participants had registered for Car Rallies in 47 different ridings.  To register for the May 14 event, visit: www.campaignlifecoalition.com/CarRallies.