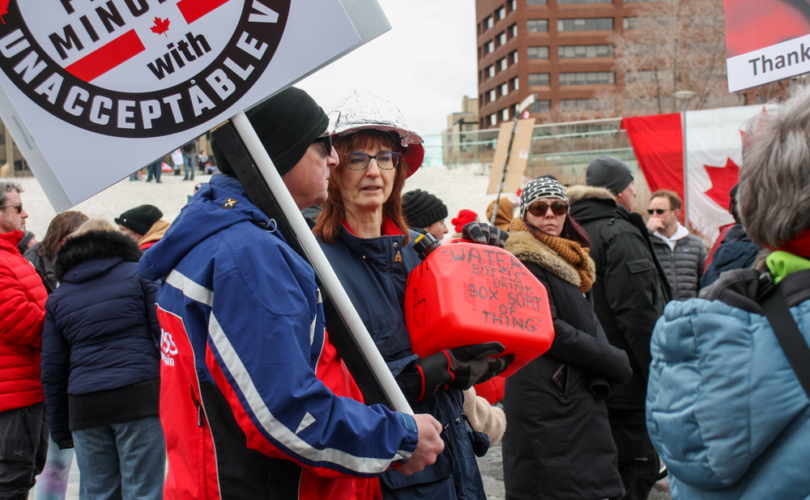 A freedom protest over the weekend at the Alberta legislatureShutterstock

(LifeSiteNews) – On the weekend leading up to the Emergencies Act (EA) vote that took place on Monday night in Parliament, Canadians from all over the country took to the streets to protest COVID policies and in support of the Freedom Convoy movement.

The EA was supported by the House of Commons, and will be in place – unless there is a new development – until 30 days have passed from February 14.

Gruesome scenes took place in Ottawa last weekend, including an elderly indigenous woman being trampled by a police horse and a female journalist being tear-gassed and shot in the leg with a riot gun.

These events took place in conjunction with the arrests of multiple convoy organizers and supporters.

Despite the events in Ottawa, protests in support of the freedom movement in Canada took place in various provinces and cities.

Also, Premiers are now taking the feds to court or considering doing so in light of the EA.

Quebec City was home to a smaller convoy and a protest that had fireworks and live music.

Trucks line the streets of Quebec City to stand in solidarity with the Freedom Convoy protesters in Ottawa and to protest restrictions. pic.twitter.com/nRyQ79YSgM

Protesters in Quebec chant “liberte” as Trudeau’s attempts to crush the Freedom Convoy fail spectacularly, spurring even more protests across Canada. Comment when you see it… 😉🇨🇦🇺🇸 pic.twitter.com/QSHbauecMn

Not to be outdone, Winnipeg has a protest of its own that doesn’t look like it is slowing down. The organizers are now demanding to meet the prime minister in the same fashion that Ottawa protesters did.

Premier Heather Stefanson said that she does not want the EA to apply to her province, even though her own province experienced protests at the border.

The streets of Calgary, Alberta were also filled with tens of thousands over the weekend protesting government overreach.

Alberta Premier Jason Kenney has no intention of quashing the protests with emergency powers and has even decided to take the federal government to court as a way of pushing back against what he sees as government overreach.

On Vancouver Island, protesters lined the streets of the provincial capital in Victoria, British Columbia. Residents of the city honked in support and were greeted with loud affirmation.

A huge number of freedom protestors marched through Toronto on Saturday while police cracked down against the Freedom Convoy in Ottawa.pic.twitter.com/cGOAVEjpiJ

In Saskatchewan, Premier Scott Moe is considering legal action against the federal government like his Albertan neighbor.

WATCH: The Sask. government considers legal action against the use of the Emergencies Act by the federal government. Wayne Mantyka reports. https://t.co/RDjafDf4P4 pic.twitter.com/zsLiNwSLvw

As things heat up in Ottawa, with the EA now being debated in the Senate, it looks like Canada is showing no signs of declining activity against Trudeau and his policies.