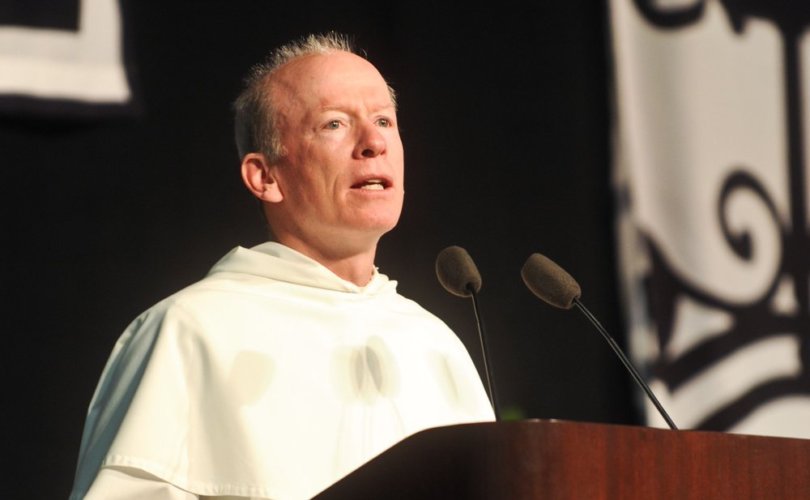 He also said the Dominican-run institution “always has, and always will, remain faithful to the teachings of the Catholic Church” but “our collective challenge is to find a way to be faithful to our Catholic identity and to be inclusive” of the “LGBTQ+ community.”

The pro-family student and Resident Advisor (RA) who has faced threats and harassment for defending Catholic teaching is Michael Smalanskas. Smalanskas told LifeSiteNews “there are still reasons for serious concern moving forward” after Fr. Shanley’s email.

The trouble for Smalanskas began earlier this month, when he posted a bulletin board articulating what the Catholic Church teaches about “Marriage: The Way God Intended It.”

The bulletin board was repeatedly vandalized. Smalanskas’ fellow RAs threateningly congregated outside his door, leading campus police to transport Smalanskas to a secure, undisclosed location in the middle of the night because they feared for his safety.

On March 14, a cartoon of Smalanskas being forcibly sodomized was posted in the bathroom of his residence hall. Later that day, Vice President of Student Affairs Kristine Goodwin sent student leaders an email encouraging them to attend the pro-LGBT march being organized in response to the Catholic bulletin board. It’s unclear whether she was aware of the sexual assault threat.

That pro-LGBT march, originally scheduled for March 21, was postponed to March 23 due to weather.

On March 21, Bishop Thomas Tobin, the local ordinary, sent Smalanskas a letter calling the harassment and threats he was receiving “reprehensible.”

“I admire and commend your courage in stepping forward to proclaim the teachings of the Church about Holy Matrimony,” Tobin wrote.

“For the sake of the record, I want to say that the President of Providence College, Father Brian Shanley, O.P., continues to have my personal support,” the bishop continued. “He is a good man, a dedicated and faithful priest, and has proven to be an effective leader of Providence College.”

…it does seem to me that Providence College is standing at the crossroads and now has to make a conscious decision about which road to travel. Will it maintain, proudly, unapologetically and unambiguously, its Catholic heritage by preaching, teaching and living the Catholic Faith in all its beauty and richness? Or, like so many other institutions today, will it succumb to modernist trends and become just one more progressive, secular bastion of political correctness? Or, we might ask: Will it continue to be P.C. – the Providence College we’ve come to know and love; or simply be p.c. – politically correct, the pathetic, ephemeral fashion that has, in recent years, taken such an ironclad grip on our culture?

On the morning of March 26, Fr. Shanley sent an email to all of campus complaining that “the College has been the subject of much discussion and negative publicity, mostly on conservative social media sites.”

“Much of what has been reported is not accurate,” he asserted, but did not give any examples of any part of the scandal being inaccurately reported.

“I am distressed by the way Michael Smalanskas has been vilified and ostracized by many of his peers,” Fr. Shanley wrote. “While some might not agree with how he tried to express Church teaching, he is entitled to the same respect, charity, and protection that is due any student. There can be no place on our campus for bullying, harassment, or intimidation. The drawing of him that was posted in the St. Joseph Hall men’s room was odious and reprehensible.”

I am writing to follow up on my communication of March 19 and to address again the controversy that is currently roiling our campus.  Since I wrote my first message, the College has been the subject of much discussion and negative publicity, mostly on conservative social media sites.  Much of what has been reported is not accurate.  My office has been barraged with phone calls and e-mails that have been angry, accusatory, and ironically uncharitable.  Many suggest that Providence College has abandoned its Catholic identity and fidelity to Church teachings, particularly with regard to the sanctity of Marriage, and has succumbed to “political correctness.”  In order to address several of the issues that have surfaced, I would like to make the following points:

1.      The College always has, and always will, remain faithful to the teachings of the Catholic Church.  We will do everything in our power to proclaim and explain these teachings to our students from the pulpit, in the classroom, and in the day-to day life of our campus.  We will, however, do this in a spirit of Christ-like charity and compassion. This is especially important and challenging in difficult matters related to human sexuality.   For those who do not accept the premises of the Church’s teaching on marriage and human sexuality, the doctrine can appear to be hard to accept or even harsh.  Our challenge is to dialogue respectfully with those who disagree with the Church.  This is especially a challenge for those on our campus who are members of the LGBTQ+ community.  What I hear from members of that community is not that they expect us to disavow the Church’s teaching, but rather to find a way to help them feel included in the light of our Catholic identity and in a way that recognizes their inherent dignity as created in the image and likeness of God.   Our collective challenge is to find a way to be faithful to our Catholic identity and to be inclusive.

2.      I am distressed by the way Michael Smalanskas has been vilified and ostracized by many of his peers.  While some might not agree with how he tried to express Church teaching, he is entitled to the same respect, charity, and protection that is due any student.   There can be no place on our campus for bullying, harassment, or intimidation.  The drawing of him that was posted in the St. Joseph Hall men’s room was odious and reprehensible.  The Providence Police were notified, and the Office of Public Safety is attempting to determine who was responsible.  If you have any information about this, I would encourage you to contact Public Safety.

Let me conclude by saying that I believe that the challenge to be faithful to our Catholic and Dominican identity and to be inclusive appears daunting.  It is a challenge on every Catholic campus and in the Church as a whole.   We are not alone.  I take heart in the belief that God’s providence will guide us through our challenges as a community.  It is my hope and prayer for our community that as we enter into the Church’s holiest time of the year, we will find the gift of a Resurrection that brings healing, reconciliation, and peace.

“Many will champion this communication from Fr. Shanley as a victory for faithful Catholics. While I appreciate that he addressed the issue more thoroughly today, there are still reasons for serious concern moving forward,” Smalanskas told LifeSiteNews.

Fr. Shanley’s “hesitation to speak forcefully on the matter speaks volumes,” he continued. “It took the president over three weeks to try and do something that could have easily been addressed immediately. He seems to suggest that his only reason for doing so was in response to the negative publicity and criticism from concerned Catholics, once again insulting anyone who is concerned about Catholic identity as uncharitable and angry.”

Fr. Shanley affirms that the college has always and will always be faithful to Church teaching, yet for the last three weeks [and much longer], people have been rightfully concerned that this is not the case.

He continues to pit Catholic teaching against efforts toward inclusion. There will always be such a tension for Fr. Shanley and others who have a vision of inclusion that seems to desire express affirmation of the very lifestyle choices and behavior of LGBTQ people. Instead of using the vast treasury of the Church’s knowledge to approach diversity and inclusion in a way that draws people in and toward a higher good that has been revealed by God and ordained in nature, he comes across as exhausted by a rigid Church that is in desperate need of a new way to approach these issues.