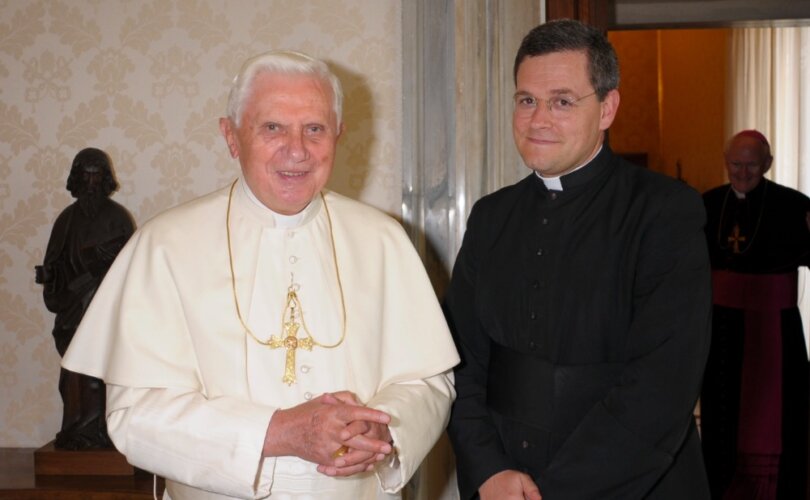 The revelation came in a press release Saturday, by which the FSSP marked the death of Pope Emeritus Benedict XVI earlier that same day. The brief statement referred to the traditional community’s “sorrow” at learning of Benedict’s death, noting that he “was on several occasions a providential support for our community.”

READ: Pope Benedict XVI dies at the age of 95

The FSSP’s statement explained how as Prefect of the Congregation for the Doctrine of the Faith, then-Cardinal Joseph Ratzinger was “instrumental in the founding of the Fraternity and even visited its seminary in Wigratzbad for Holy Week in 1990.”

The FSSP was erected in 1988 by Pope John Paul II, after a group of priests and seminarians left the traditional Society of St. Pius X, which was founded by Archbishop Marcel Lefebvre. The FSSP was thus founded with a particular devotion to celebrating the traditional Mass and sacraments.

Now in its revelatory statement, the Fraternity revealed that the community had enjoyed “personal contact” with Benedict XVI during his papacy. This culminated with a letter he reportedly sent to the superior of the FSSP only months ago.

A few months ago, from his place of retirement at the Mater Ecclesiæ monastery in the Vatican, he sent a private letter of encouragement to the Superior of the Fraternity of Saint Peter following the Motu Proprio Traditiones Custodes.

Such an action of the part of the now deceased emeritus pontiff marks a very rare intervention since he began his life of retirement on February 28, 2013. The Vatican has not made any response to the FSSP’s mention of such a letter.

The FSSP have revealed that #PopeBenedictXVI sent “a private letter of encouragement to the Superior of the Fraternity of Saint Peter” following #PopeFrancis‘ 2021 attack on the #LatinMass as contained in Traditiones Custodes.https://t.co/RdH7sLqBzI

On July 16, 2021, Pope Francis famously issued his much anticipated restrictions against the traditional Mass, abrogating Benedict’s Summorum Pontificum at the same time. Francis declared that the liturgy of Paul VI, or the Novus Ordo, is the “unique expression of the lex orandi of the Roman Rite.”

The future of traditional societies of priests, such as the FSSP or the Institute of Christ the King Sovereign Priest (ICKSP), was left uncertain as a result of such a document.

Both communities did in fact suffer casualties as a result of the document, with a Fraternity church in Mexico being suppressed for a time in 2021, and the ICKSP notably banned from saying public, traditional Masses in its church in Chicago, earlier in 2022.

But then, in a shock announcement in February 2022, the FSSP stated that Pope Francis had received two members of the Fraternity in a private audience, where he had confirmed that the community was not affected by Traditionis Custodes.

Declaring that the FSSP’s gesture of remaining “faithful to the Roman Pontiff” should be “preserved, protected and encouraged,” Francis reportedly “made it clear” that the FSSP and institutes similarly devoted to the traditional Mass “are not affected by the general provisions of the Motu Proprio Traditionis Custodes, since the use of the ancient liturgical books was at the origin of their existence and is provided for in their constitutions.”

Twelve assembled traditional communities – the Ecclesia Dei communities, including the FSSP and ICKSP – had previously issued a joint response to Traditionis Custodes in September 2021, asking for their way of life to be affirmed, and expressing their “adherence to the magisterium (including that of Vatican II and what follows), according to the Catholic doctrine of the assent due to it (cf. in particular Lumen Gentium, n° 25, and Catechism of the Catholic Church, n° 891 and 892), as evidenced by the numerous studies and doctoral theses carried out by several of us over the past 33 years.”

“We feel suspected, marginalized, banished,” wrote the signatories, adding that “we do not recognize ourselves in the description” which Pope Francis gave of those devoted to tradition in the letter accompanying Traditionis Custodes.

That response did not elicit a public response from the Vatican. However, three months later and only days before Christmas, the now-Cardinal Arthur Roche – Prefect of the Congregation for Divine Worship and the Discipline of the Sacraments (CDW) – issued new restrictions against the Mass and sacraments.

Issued in the form of a Responsa, Roche’s document widely axed celebration of the sacraments according to the traditional liturgical form. It also decreed that a priest who did “not recognize the validity and legitimacy of concelebration – refusing to concelebrate, in particular, at the Chrism Mass,” was to be banned from saying the traditional Mass.