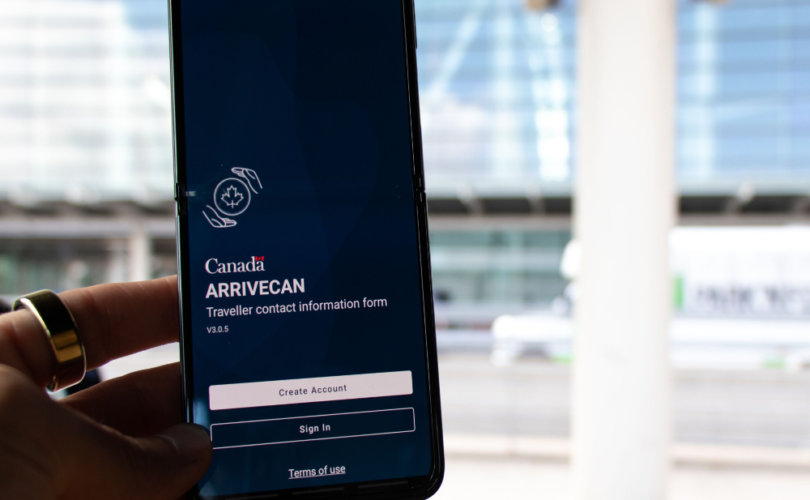 Relaying her recent trip to the United States to visit family members she had not been able to see for over two years, the mother explained to LifeSiteNews that she had diligently followed all the rules set out by Trudeau’s Liberal government, including downloading and filing out the now mandatory ArriveCAN quarantine monitoring app.

The mother outlined to LifeSiteNews that while her entry into the States and her visit with family went smoothly, it was when she was reentering Canada that the Trudeau-imposed border regulations became a problem.

“The night before I was leaving, I got on the website to do my ArriveCAN app … and I get on the website and it doesn’t work,” the woman explained. “I basically spent an hour fooling around with it … of course, it doesn’t work. My husband suggested I call the border to ask them what to do, and nobody answered.”

The mother explained that it was not until the next morning, the day of her departure, that she was finally able to get a hold of the border and have her ArriveCAN app glitch rectified to allow her and her children to fill out the required information.

When she was eventually able to get to the border that night, the officer working asked her if she was aware she “had to quarantine for 14 days,” to which she replied, “Yes, I am.”

The border agent then asked the mother how many of the travelers, including her, over age 12, to which she said, “There are two of us.”

After the mother’s answer, the border agent explained that all those above age 12 are required to take a test on “Day one” and “Day eight” of their so-called “quarantine,” but younger children do not have to do so.

The mother said at that point she confirmed with the border officer that only those children over 12 had to take a test, as she was under the impression that the testing requirement applied to anyone over age five.

“Oh, no, it’s just everyone over the age of 12 [that has to test],” she recalled the officer saying.

When she got home, she told LifeSiteNews that she took the government-mandated test and made sure her child over age 12 did as well.

It was at this point that the mother explained that the Public Health Agency of Canada began calling her to do “quarantine checks,” and when she received a “live call regarding her seven-year-old … and the woman on the phone asked if her seven-year-old had taken a ‘Day one’ test.”

The mother relayed to LifeSiteNews that she explained to the woman on the phone that she was told by the border officer specifically that only children age 12 and above had to take the test.

It was at this point that the mother said the public health worker on the call told her that the border officer’s information was incorrect, and began to “read the penalty for not completing the ‘Day one’ test,” which included a “750,000 fine and/or removal to a quarantine center.”

“Well, at that point, I lost it,” the mother told LifeSiteNews. “You’re talking about removing my child from my home, when the border guard screwed up.”

The mother says that after a tumultuous phone call in which she could “not reason” with the person on the phone, she got in contact with lawyers who informed her that the public health worker was in the wrong and the removal of her child was not legally permissible.

The traumatized mother also told LifeSiteNews that she later was able to speak with another public health worker who also rebuked what the initial worker had said, and assured her that her child would not be removed.

Explaining the effect this ordeal has had on her and her family, the mother said the experience was tantamount to “psychological torture,” and not a “day goes by” where she does not think about the fact that “all I did was go visit my family … and this is what Canada has to do.”

The miscommunication between border agents, public health workers and other government officials that the says she experienced line up with recent statements made by a Canadian Border Service Agency (CBSA) officer who has spoken out against the Trudeau government’s ArriveCAN app and quarantine protocols, which he described as “tyranny.”

In a now-viral video, CBSA officer Patrick McNulty explained that the “[The government] is genuinely counting on mass confusion, which then equates to mass compliance” when enforcing these measures, and often times border officers as well as public health workers are just as confused as ordinary citizens about what the proper protocols are.

As reported by LifeSiteNews, while the ArriveCAN app was initially marketed as a temporary tool to allow Public Health officials to monitor COVID quarantines during the so-called pandemic, recent statements by Trudeau’s Minister of Public Safety suggest that the program is not only here to stay, but is actively being expanded “beyond” the scope of its initial use.

“The growth of the scope of the ArriveCAN app is troubling,” Justice Centre for Constitutional Freedoms lawyer Hatim Kheir told LifeSiteNews by email. “It started as a tool for monitoring quarantine. It was expanded to include health data, specifically, COVID vaccination status. It is being further expanded to include customs information.”

“Under the Charter of Rights and Freedoms, every Canadian citizen has the right to enter Canada. The app infringes that right of mobility by acting as a barrier to returning,” Kheir explained. He added that “[t]he app also poses serious threats to privacy” as “Canadians should not be required to disclose personal, medical information as a precondition to exercising their right to return home.”