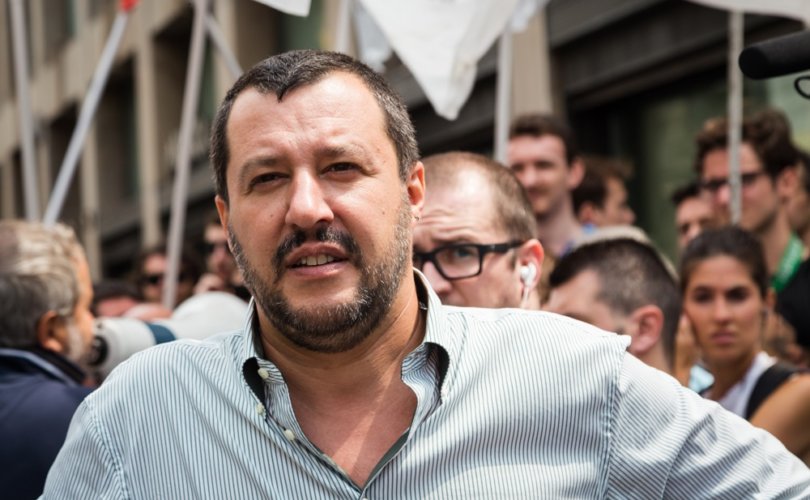 Matteo Salvini, deputy prime minister of Italy and leader of the party The League.Tinxi / Shutterstock.com

In a July 17 move by a center-right majority led by the League party, the Friuli Venezia Giulia regional council approved a motion calling on Italy’s national government to prohibit the prescription of drugs that prevent normal sexual development of adolescents.

According to the council’s motion, “puberty is not a disease” and thus should not be prevented with surgery and medications that can produce irreversible effects. It also noted the long-term negative effects of drugs containing triptorelin.

“There is no evidence, in fact,” reads the motion, “on the effective full restoration of fertility in the case of withdrawal from treatment.” It cites data circulated by the American College of Pediatricians, which stated that as many as 98% of minors will outgrow their gender dysphoria (a feeling that one’s biological sex does not accord with one’s gender expression) after having passed through puberty naturally.

“We express opposition to the use of this drug,” said Mauro Bordin, according to VoceControCorrente. Bordin, who represents the League on the council and was a signatory of the motion, went on to say there are not enough clinical studies, “especially regarding the possible long-term negative effects and why blocking puberty pharmacologically could cause a misalignment in [adolescent] physical and cognitive development.” He said puberty-blockers could even compromise those parts of the brain that contribute to the definition of sexual identity, which also involve both environmental and educational factors.

Bordin said the motion is not an “ideological position, but a proposal of common sense in the exclusive interest of the health of children throughout Italy.” Critics have long warned against medical interventions for persons experiencing gender dysphoria. For example, Dr. Michelle Cretella of the American College of Pediatricians said in 2017, “Transgenderism is a psychological disorder, not a biological one.” She added, “Consequently, we expect transgenderism and its associated medical procedures to increase as society increasingly promotes this lifestyle.” Regarding a move by the American Society of Plastic Surgeons to coin the term “gender confirmation surgery,” she said, “Linguistic engineering precedes and accompanies social engineering.” Cretella went on to say, “Transgender activist physicians realize that sex reassignment surgery is a misnomer. In other words, surgery cannot change a person’s sex. By renaming sex reassignment surgery gender confirming surgery, they give the impression that they are affirming an inborn trait and further the innate immutable transgender myth.”

On the Italian Notizie Pro-Vita website, pro-life activist Dr. Silvana De Mari said, “The body is real. The mind must accept this reality and love it.” According to De Mari, “where there is no harmony between mind and body, the mind must be cured; the body must not be altered. The concept that sees the body and mind as disconnected,” said De Mari, is a pathological dissociative disorder.

The American College of Pediatricians recently warned the surgeon general of the United States against surgical and hormonal methods to obscure the sex of minors. ACP pointed to warnings issued by the U.K.’s Royal College of General Practitioners that the long-term effects of these techniques have not been subjected to sufficient research.

Triptorelin is marketed by the France-based Ipsen as Decapeptyl and as Diphereline and Gonapeptyl by Ferring Pharmaceuticals of Switzerland. In the United States, it is sold by Watson Pharmaceuticals as Trelstar. Triptorelin is a synthetic version of the natural hormone GnRH, which regulates the release of gonadotropins that are involved in the development of release of ova from human ovaries. Among the side effects, for women and girls, is ovary over-production; ovarian cysts; miscarriage; and heavy, prolonged menstruation. It is used for suppressing puberty.