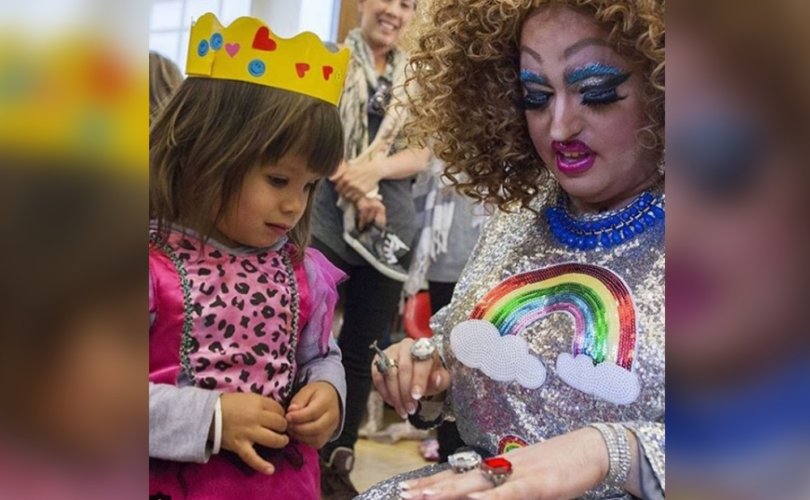 The taxpayer-funded St. Paul Public Library is putting on these events as part of its anti-Trump inclusivity campaign. It has defended its plans to show little children the hyper-sexualized crossdressers at some of its locations.

The event company the library is bringing in is the adult party company Flip Phone Events, which offers a number of drag services typically for those over 18 or 21.

The “story hours” during which men dressed as woman will read to the kids are scheduled for June 11, June 16, and July 11.

“Come meet some fabulous drag queens and kings at the library!” an ad for the June 11 reading says. “They will read stories, sing songs, and strut their stuff for an over-the-top story hour. All ages welcome.”

Flip Phone Events asked its twitter followers to help defend its kids’ event because it was “getting MEGA trolled” by concerned parents online.

A number of parents told Alpha News they find the events disturbing, but none would go on the record.

“In addition to Drag Story Hour, patrons can find a selection of staff-recommended materials on the library's website for Pride, including a fun primer on drag culture with recommended DVDs, books, and online resources,” the library said in a press release about the event. It recommends 21 “great LGBTQIA” books for kids six and under in what it calls its “Rainbow Collection.”

“Drag queen story hours” have taken off at liberal libraries in various parts of the country as a way to introduce children to transgenderism and the LGBT world.

@thesparkleleigh had an amazing mermaid theme reading in Seattle! Happy Pride Everyone! #dqsh

It “gives kids glamorous, positive, and unabashedly queer role models,” the group’s national website says. “In spaces like this, kids are able to see people who defy rigid gender restrictions and imagine a world where people can present as they wish, where dress up is real.”

Ms B with some fans at yesterday's #dqsh at Elmhurst Library.