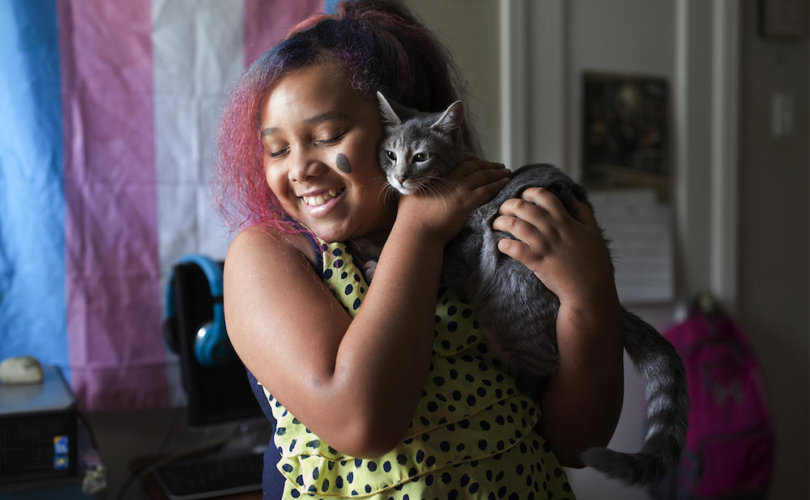 ST. LOUIS, Missouri, August 23, 2017 (LifeSiteNews) – A publicly-funded radio station in St. Louis is publicizing one family's quest to fundraise $30,000 for puberty blockers for their “transgender” 11-year-old.

“My heart tells me I’m a girl; I’m just a girl,” said Mazy. But “it feels like I’m a man” thinking about what his body will undergo during puberty.

“The small possibility of an elevated red blood cell count and soreness at the injection site” were the only risks of taking puberty blockers mentioned in the article.

The article ignored “the obvious” serious side effect “of permanent sterility for those who follow puberty blockers with cross-gender hormones,” Peter Sprigg, senior fellow for policy studies at the Family Research Council, told LifeSiteNews.

“It is tragic — and, arguably unethical — that some children who experience gender dysphoria are now being treated with so-called puberty-blocking hormones,” said Sprigg. “Such interference with the natural processes of a healthy body is not consistent with the traditional principle of medical ethics to 'do no harm.'”

“Despite expanded services, cost will remain an issue for many families,” the article said. “Puberty blocker injections and patches can cost $30,000 or more a year.”

Mazy's father is unemployed and planning to return to graduate school. His mother has a serious injury from a car accident and is on disability. Mazy is on Medicaid, which in Missouri doesn't cover child sex changes.

Mazy is “scared to death that [he's] going to have facial hair and a deep voice,” his mother wrote on their GoFundMe page. He is “extremely worried that [sic] she'll sound or look like a boy.”

For now, he has been able to start middle school as a “girl” and “students don’t know” he's a boy, St. Louis public radio reported. School officials are letting him use the girls' restroom.

The report said some of Mazy's friends don't know he is a boy.

“Advocates of puberty blockers argue that if the child changes his or her mind, the hormones can be stopped and normal puberty can resume. However, there is no record in the literature of anyone ever doing this,” Sprigg explained. “Such an outcome is in stark contrast to the data which shows that the vast majority of children who exhibit gender-nonconforming behavior do not grow up to be transgender adults.”

Those who oppose giving children puberty blockers and then manipulating their hormones often point out that until recently puberty was a time when teens were encouraged to learn about their bodies and accept their biological sex. It also can help end gender confusion.

“It’s a very scary thing to have to go through something that’s natural that will solve a problem when you don’t want that solution,” Dr. Quentin Van Meter, vice president of the American College of Pediatricians, told LifeSiteNews. Puberty blockers are “a way to essentially prevent that from ever happening.”

But “it goes completely against medical ethics” to do this to a child, he said.

“Beginning puberty blockers has the effect in reality, if not in theory, of locking a young child into a path of irreversible change whose consequences no child is mature enough to anticipate,” said Sprigg. “Children suffering from gender dysphoria need psychological care aimed at helping them to become comfortable with their actual biological sex, not medical interventions that interfere with the normal operation of their bodies.”

This is “clearly an abnormal circumstance,” said Van Meter. “It is a disorder. It needs to be treated as such.”

To tell a boy he is a girl and affirm that “psychologically” or “with medications” is “medical malpractice,” he said.