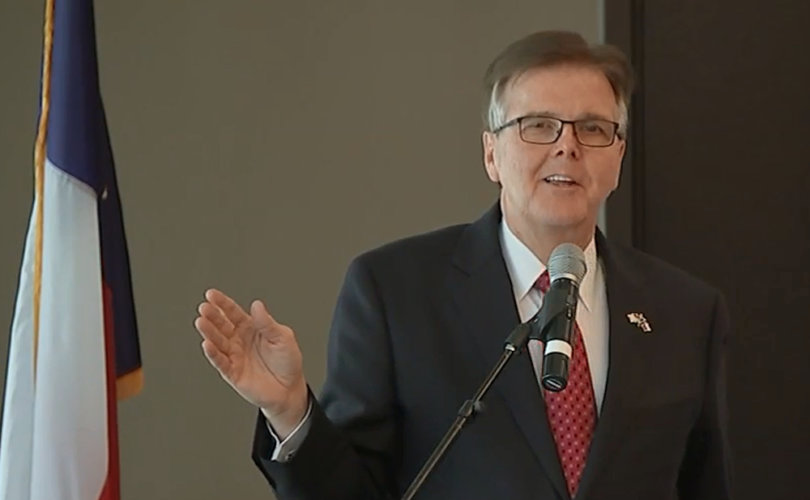 Republican Texas Lt. Gov. Dan Patrick announced legislation sponsored by State Senator Lois Kolkhorst (R-Brenham) that would require biological males to use the men's room and biological females to use the women's room in publicly-funded schools and government buildings.

The Women's Privacy Act is “the right thing to do,” said Patrick, who opposed same-sex “marriage” as a Texas legislator. “The people of Texas elected us to stand up for common sense, common decency and public safety.”

The apparent intent of Senate Bill 6 is to pre-empt proposed laws from gay activists that allow men into girls' and women's showers, locker rooms, toilets, and intimate facilities, justified by a self-chosen “gender identity.”

Not unexpectedly, the announcement raised protests at the capital from homosexuals. National News Watch reported that protesters carried signs against SB6 and interrupted the announcement with loud “boos.”

Patrick said at a press conference that proponents realize it will be a politically incorrect and therefore a difficult battle, but the transgender agenda needs to be opposed. “We know it’s going to be a tough fight, but we're on the right side of the issue,” he said. “You can mark today as the day Texas is drawing a line in the sand and saying, 'No.'”

Organized LGBTQ activist groups and the ACLU of Texas have lambasted the proposed legislation as “invidious,” “discriminatory,” and bad for the Texas economy. They point to North Carolina's separate bathroom law, which was opposed by numerous corporations that pressured the state by withdrawing business, canceling expansion plans, and relocating lucrative sports championships outside the state.

One homosexual advocacy group called “Keep Texas Open for Business” released a study that claimed that Texas could lose from $964 million to $8.5 billion and from thousands to as many as 185,000 jobs over separate bathroom laws.

Patrick says the study is an exercise in “fear-mongering,” using “misinformation.”

Griffin and the HRC threatened the state. “If lawmakers vote to discriminate against transgender people, Texas will be closed for business.”

Patrick mockingly countered, “The economic doom? The Super Bowl is teed up for 5:30 p.m. on February 7.”

Meanwhile, conservative groups applauded the legislation. Liberty Counsel released a statement noting that SB 6 “would still allow for accommodations for so-called transgender students, such as single-stall restrooms on a case-by-case basis” and saying the bill would “protect women in public restrooms.”

“This issue is not about discrimination,” the Liberty Counsel statement read, “it's about public safety, protecting businesses and common sense.”

Political scuttlebutt is that the state Senate, which has a Republican majority, might very well pass the bill, but state House Speaker Joe Straus characterized the bill as not “the most urgent concern of mine.”

As far as a gubernatorial veto, Texas Gov. Greg Abbott remained noncommittal last month, saying the bill is “something that needs to be looked at.”

Texas successfully led 13 states in a lawsuit against the Obama administration forcing public schools to allow self-appointed “transgender” children to use the bathroom of the opposite sex.