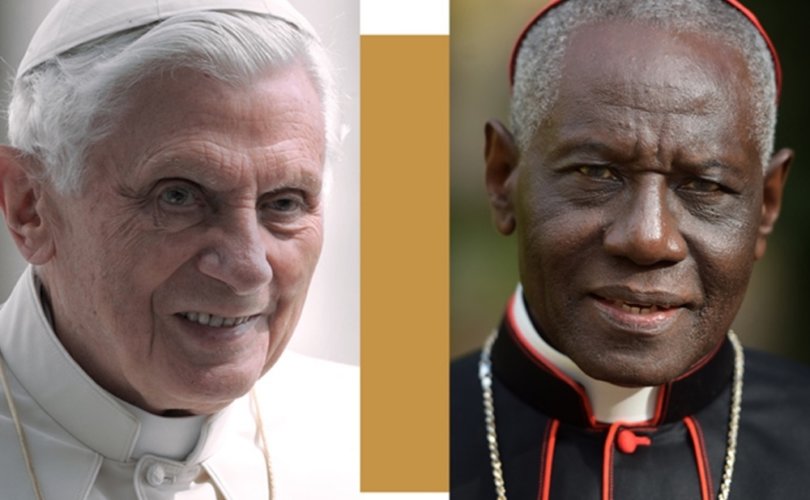 Pope emeritus Benedict XVI and Cardinal Robert Sarah on the cover of the book "From the Depths of Our Hearts."

Jan. 13, 2020 6:30 EST update: This report now includes a tweet from Cardinal Sarah defending his “close collaboration” with Pope Benedict on the book.

SAN FRANCISCO, California, January 13, 2020 (LifeSiteNews) – The publisher of a book by Pope Emeritus Benedict and Cardinal Robert Sarah on priestly celibacy has confirmed that Benedict did, in fact, co-author the book with the Cardinal.

Fr. Joseph Fessio, S.J., the editor-in-chief of Ignatius Press, told LifeSiteNews that “it is ‘fake news’” that Benedict XVI didn’t really participate in writing the book.

“I just got a call from Cardinal Sarah. He confirms that Pope Benedict is co-author with him,” he said.

Just after LifeSiteNews published this report, Cardinal Sarah tweeted a series of letters from Pope Benedict showing what the Cardinal called his “close collaboration” with the Pope.

“The attacks seem to imply a lie on my part. These defamations are of exceptional gravity. I give this evening the first proofs of my close collaboration with Benedict XVI to write this text in favor of celibacy. I will speak tomorrow if necessary,” he tweeted.

Fessio earlier today told Catholic News Agency (CNA) that claims that Cardinal Robert Sarah had misrepresented the Pope Emeritus’ co-authorship of their work “From the Depths of Our Hearts” were incorrect.

“Are these people really implying that Cardinal Sarah is involved in a conspiracy to distort the truth?” Fessio asked.

Fessio and Ignatius Press stand by the attribution of the book to both Sarah and the Pope Emeritus. The San Francisco-based press has published several books by Benedict XVI.

Various journalists have spread the rumor on social media.

According to CNA, a Vatican-based reporter for Spanish COPE radio named Eva Fernandez tweeted a statement that a “source very close to Benedict XVI” said that he had not written the book defending celibacy with Cardinal Sarah and had not given his authorization for the work to be published. Fernandez said also that Benedict had merely provided a work on the priesthood which he was writing.

Fernandez was echoed by Gerard O’Connell, the Vatican correspondent for the left-leaning America magazine.

“Benedict XVI did not coauthor the book on priesthood and celibacy with Cardinal Sarah,” O’Connell tweeted.  “….Story coming soon on America magazine.”

Shortly afterward, however, O’Connell tweeted that America was holding his story.

“@americamag has decided to hold my story that Benedict XVI did not coauthor the book with Cardinal Sarah on priesthood and celibacy,” he wrote.

“It wants to get comments from others involved before publishing the story. For the record: my information came from a source close to Benedict XVI.”

The rumor was also taken up by Christopher Lamb of the UK’s left-leaning The Tablet magazine.

“Report that Benedict XVI never saw or approved the book on celibacy which he is being presented as the co-author of,” Lamb tweeted.

“Benedict, according to a source close to him, simply gave Cardinal Sarah an essay on the priesthood that he had been working on…”

The “source” has not yet been named, but tweets in multiple languages are flying fast around the internet. At least two reporters are alleging that Benedict himself has disavowed the book.  Hendro Munsterm, a Vatican correspondent from the Netherlands, tweeted that “Various sources in Rome report that Pope Emeritus Benedict XVI denies having written the book about compulsory priesthood celibacy with Cardinal Sarah.”

Argentina’s La Nacion is also alleging that the former pontiff has denied having written a book:

“Benedict XVI did not write a book in conjunction with Sarah. He never saw it, nor did he authorize the cover, nor the fact that a book would be written in cooperation with someone else,” a Vatican source very close to Joseph Ratzinger assured La Nación… “It is evidence that there is a publishing and media operation from which Benedict distances himself and with which he declares himself to be completely unassociated,” the source added, who asked for anonymity, who did not specify who would be behind such an operation, and who gave the added detail that some months back the pope emeritus was writing some notes on the priesthood, which Cardinal Sarah asked to see. “The Pope Emeritus placed the text at his disposal, knowing that he was writing a book on the priesthood.”

Villanova University professor Massimo Faggioli responded to the rumor by tweeting, “Ma roba da matti” (“Craziness”), and one of Lamb’s Twitter readers suggested that the “Catholic Left” has become hysterical.

Certainly, the media seems to be in an uproar since French newspaper Le Figaro broke the news that Benedict XVI and Cardinal Sarah had written a book in which they defended the norm of priestly celibacy in the Catholic Church. The English biographer of Benedict’s successor Pope Francis, Austen Ivereigh, has suggested that the Pope Emeritus is being manipulated by abusive Vatican “courtiers.”