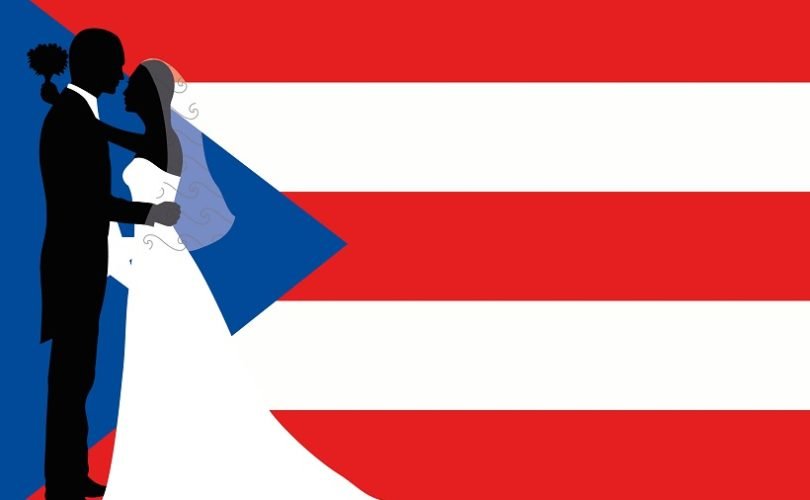 SAN JUAN, March 24, 2015 (LifeSiteNews.com) – Government officials in Puerto Rico have announced that they will no longer fight to protect the U.S. territory’s marriage law, which defines marriage as a union between one man and one woman.

In October, Puerto Rico made headlines across the mainland United States by successfully defeating a federal lawsuit brought by five homosexual couples seeking to overturn its marriage law – a rare victory for pro-marriage forces in a legal climate that has recently seen dozens of states forced by federal courts to redefine marriage to include same-sex couples.

In dismissing the lawsuit, U.S. District Judge Juan Pérez-Giménez stated that marriage is “exclusively [an] opposite-sex institution…inextricably linked to procreation and biological kinship.”

On the day of the deadline, the territory announced that it has reversed its stance on marriage, and will no longer defend the marriage law against court challenges.

“It [is] neither fair nor correct to defend the constitutionality of that law,” Justice Secretary César Miranda said Friday. “Same-sex couples cannot get married and therefore do not have access to those rights. They should be available to all those who love each other, who take care of each other, who work and contribute to this society like everyone else.”

Puerto Rican Governor Alejandro Garcia Padilla, a Democrat, said that for him, the reversal was a personal decision.

The governor is a practicing Catholic whose faith teaches him that marriage is a union between a man and a woman, and he has long defended the island’s law as an expression of that fundamental truth.

But as an increasing number of federal courts forcibly redefine marriage to include same-sex couples, Garcia Padilla said he feels there is an “undeniable consensus” that laws restricting the institution to opposite-sex couples are “discriminatory.”

“Everyone knows my religious beliefs, but it's not up to political leaders to impose our creeds,” Garcia Padilla said. “We have to push for the progress of civil and human rights under equal conditions for everyone.”

The surprise turnaround by Puerto Rican leadership sparked outrage among supporters of marriage and family across the island.

“This is a slap in the face to Puerto Rican society,” lawmaker Maria Milagros Charbonier told Yahoo! News. “The government should not be playing around with issues as delicate as that of family, which is the cornerstone of our island.”

“Pope Francis has labeled this type of imposition on the part of a government as ideological colonization,” Gonzalez Nieves said. He called for a referendum to allow the Puerto Rican people to have a say in whether or not their society changes the definition of marriage.

“We urge our people to launch a process so that a decision of such historical magnitude and significance can be decided through a referendum in which (voters) can express themselves,” the archbishop said. “If not, this would be a dictatorial imposition by the government.”

Should the voters weigh in on the issue, it is unlikely that supporters of same-sex “marriage” would have the upper hand. A recent Pew poll found that only 33 percent of Puerto Ricans support redefining marriage to include gay couples, while 55 percent actively oppose it.

When the legislature first began discussing the possibility of marital redefinition in 2013, more than 200,000 citizens marched on the Capitol in protest, representing a sizable chunk of the island’s population of 3.5 million people.

However, it’s likely the courts will intervene long before the people of Puerto Rico have a chance to make their voices heard. Now that the government has announced it will not fight for its marriage law, the First Circuit Appeals Court is free to redefine marriage for the island as it sees fit.

Meanwhile, several similar cases are pending at the U.S. Supreme Court, which is expected to rule on the legality of such court decisions, which have now overturned dozens of state marriage laws by judicial fiat.

The justices will hear arguments in those cases next month and make a decision by the end of its current term.