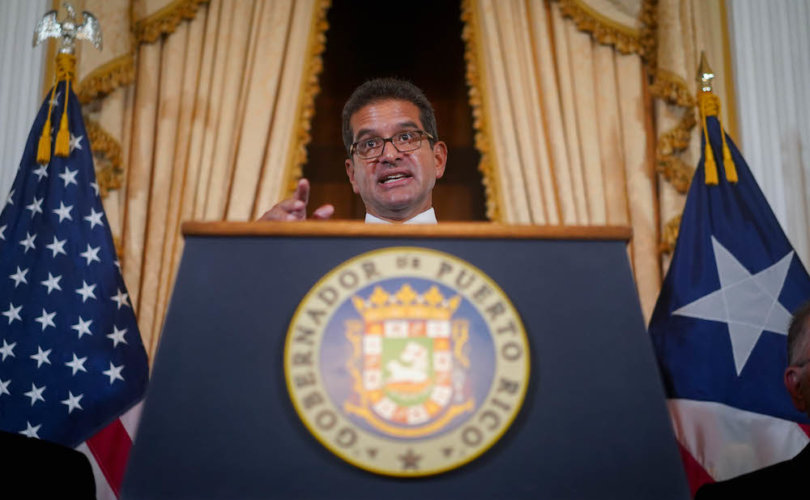 The order, which took effect immediately, imposes a 14-day at-home quarantine for citizens who are not “fully vaccinated” and who have a “reasonable suspicion” of having been exposed to COVID, regardless of whether they have symptoms.

The Puerto Rico Department of Health will “have the power to establish quarantines in other groups that it deems to be of interest to safeguard public health,” the document adds. “In addition, every citizen who has had contact with a COVID-19 positive case is instructed to perform a molecular test or viral test between the fifth and seventh days after their last exposure.”

Anyone who tests positive for the virus must quarantine for at least 10 days. Quarantine violations can result in up to six months in prison and $5,000 in fines.

Other provisions in Gov. Pierluisi’s order include a new hotline to report suspected violators and a requirement that all children between the ages of 5 and 11 get the COVID vaccine to attend in-person classes after January 2022.

“Those who do not have [the vaccines] will receive education remotely,” Pierluisi, a Democrat with a history of corruption allegations, said at a press conference Monday.

The governor’s edict also forces municipal workers and employees of businesses with more than 50 workers to take the experimental jab or submit weekly COVID tests. Pierluisi’s vaccine mandate for businesses goes beyond a mandate issued by the Biden administration this month that requires vaccination or testing for employees of all U.S.-based companies with more than 100 workers.

Pierluisi said Monday that Puerto Rico has at least 4,400 companies that will be impacted by his jab mandate, which comes into effect at the end of December.

At the same time, Monday’s order takes aim at religious exemptions, stating that anyone seeking an exemption on religious grounds must “specifically explain” how their “sincere beliefs, practices or religious observances” preclude taking a COVID-19 vaccine.

The mandatory explanation must disclose highly personal information, like the length of time spent as a practitioner of a given religion and vaccination history, according to the order:

This will include the nature of your objection; an explanation of how complying with vaccination is a substantial burden or conflicts with your sincere religious beliefs, practices, or observances; the time that has elapsed since you have these religious beliefs; the type of vaccines you object to and whether you have received any other vaccines recently.

Under the order, employers are “empowered to request more information to ensure that the beliefs are sincere.”

“With a vaccine passport, an infected person can enter into a restaurant and spread the China virus. An uninfected person without it cannot. A significant number of people hospitalized with the delta variant have received two doses of a vaccine. Yet only the unvaccinated are forced to have continual testing to retain their jobs.”

Fieles a la Verdad also slammed the decree as “an invitation to discriminate against the religious.”

“Even if an exemption is obtained, employers or schools are required to interrogate holders of religious exemptions to ‘ensure’ that they are ‘sincere.’ Mind reading of this nature is clearly wide open to all kinds of abuse,” the group warned.

All COVID vaccines available in the United States heavily relied on cell lines derived from aborted babies in development, testing, or both, sparking outrage among many people whose religious convictions prohibit them from complicity in abortion.

The bishops of Colorado wrote in an August letter that “a Catholic may judge it right or wrong to receive certain vaccines for a variety of reasons, and there is no Church law or rule that obligates a Catholic to receive a vaccine — including COVID-19 vaccines.”

“The novelty of the SARS-CoV-2 and of the technologies for eliciting an immune response to prevent or mitigate COVID-19 leave several medical questions unanswered,” the National Catholic Bioethics Center has noted. “Only time and careful study of the virus and benefits and adverse effects of the vaccines will provide the answers many persons need to give free and informed consent.”

Pierluisi’s executive order reaffirms Puerto Rico’s already uniquely harsh COVID-19 rules, despite the island’s low case and death rates. Stores may still operate at full capacity only if they demand proof of vaccination from customers, while those that do not require vaccination continue to face a 50 percent capacity limit. A mask mandate remains in effect for outdoor activities with more than 50 people and in tourist areas.

Puerto Rico has a coronavirus survival rate of nearly 99 percent and a daily average of just two COVID-related deaths, as of November 17. Around one-tenth of one percentage point of the Puerto Rican population has been reported to have died of the disease.

“This virus is here to stay,” Gov. Pierluisi nevertheless said Monday, adding that his purported goal is “that there is not a single death.” “The solution is one,” he said, referring to vaccination.

“By actively suppressing alternative early stage drug-based therapies,” Fieles a la Verdad said, “the government of Puerto Rico has trapped itself in a corner out of which it seems to believe that the only escape is an authoritarian regime of forced vaccination based on the flawed notion that vaccination is the panacea to reduce the risks of transmission.”

Puerto Rico for months has been known for some of the strictest COVID measures in the U.S.

In July, the Puerto Rican health department ordered all students, teachers, and school staff to provide proof of vaccination ahead of the fall semester. A subsequent order by Pierluisi demanded that most government employees and workers in the hospitality industry get the shot or undergo weekly testing. As of October, Puerto Rico leads the U.S. in employer-based vaccine mandates, with 52 percent of businesses requiring that employees get vaccinated.

The Catholic Church in Puerto Rico has likewise imposed some of the nation’s most extreme restrictions on Mass attendance. Six of the island’s seven bishops announced in August that they would segregate Catholics based on COVID vaccination status while forcing priests to get jabbed to celebrate public Masses.

Bishop Daniel Fernández Torres of the Diocese of Arecibo dissented from the guidance, however, saying in a letter the week prior that “it is possible for a faithful Catholic to have conscientious objection alleged mandatory nature of the Covid-19 vaccine.”

“Conscience, and its freedom, cannot be considered only as a civil right but is something intrinsic to our Catholic faith,” he wrote.