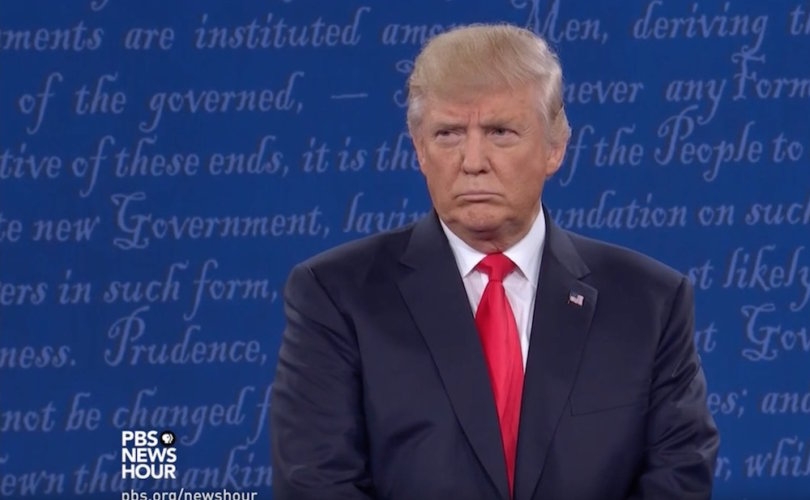 “One candidate, Hillary Clinton, said in the second presidential debate that she would appoint a justice to the Supreme Court who would uphold Roe v. Wade, the decision that made abortion on demand legally permissible,” Father Frank Pavone, National Director of Priests for Life, said. “One candidate, Donald Trump, said he would appoint a justice with views similar to those of the late Justice Antonin Scalia, who said that there was nothing in the Constitution to justify Roe.  The difference in the candidates’ answers couldn’t be clearer or more important.”

“Time and time again, Mr. Trump hammered Mrs. Clinton on the trust issue – which polls show is one of her greatest weaknesses. He repeatedly cited her primary opponent, Bernie Sanders, who said she showed a lack of [judgment]. Unlike the previous debate, he showed something akin to message discipline and left Mrs. Clinton staggered,” wrote BBC commentator Anthony Zurcher.

Trump “put her on her heels” by forcing Clinton to defend her use of a private email server and revelations of portions of her private Wall Street speeches, Zurcher wrote. “Team Clinton…has to view this [debate] as an opportunity missed.”

“Clinton squandered what was a golden opportunity to put Trump away for good” due to shockingly vulgar comments he made ten years ago coming to light. “He was so vulnerable going into this thing it’s a little perplexing that she didn’t, or at least it would be if we don’t remember the essential hollowness of Clinton’s message,” wrote CBS’s Will Rahn.

“Trump won, narrowly. But I suspect it won’t matter all that much,” Rahn, who predicts Clinton will win, wrote.

“After this debate, it is possible for Trump to retrieve his candidacy, whereas it looked like a lost cause in the two days just preceding,” according to nonpartisan commentator Bernie Quigley.

“Trump won this thing fairly decisively, I thought,” Rob Dreher wrote at the American Conservative. “Trump got much better after” an “excruciating” 20 or so minutes of him “flailing about his so-called ‘locker room talk’” and went on to “[hammer] Hillary hard on e-mail, on Syria, on just about everything.”

“This should have been the night she put Donald Trump away, and not only did she fail to do that, he actually bested her,” Dreher continued. “Look, I’m not saying he was good; I’m saying that he did much better than she did.”

“But the real news is this: how on earth could Hillary Clinton have failed to deliver a knockout blow to Trump tonight?” Dreher asked. The days leading up to the debate were filled with Republicans’ calls for Trump to drop out of the race over his shockingly lewd remarks about groping women.

“I actually think Trump won this round because he came out fighting and has revived, at least for the moment, a candidacy that could have been moribund,” John Zogby wrote at Forbes.

The moral issues of life and marriage didn’t come up until the last few minutes of the debate, when Clinton promised to nominate Supreme Court justices who will “stick with Roe v. Wade and stick with marriage equality.” Trump responded by saying he will nominate justices “very much in the mold of Justice Scalia.”

“To say that this election presents stark contrasts in the two candidates is an understatement.  I applaud audience member Beth Miller, who asked the Supreme Court question because it really was the supreme moment of the night,” Pavone continued. “Whoever controls the composition of the Supreme Court in the next four years will, in an untold number of ways, control the direction of the country for the next generation.”

Notice – Mr. Trump referred to the Constitution of the United States, and to specific amendments rather than invented rights #Debate2016

And there's the single reason I'm voting for the other guy… #abortion https://t.co/X0gkIeImld

.@HillaryClinton wants a court who will uphold Roe because she knows this: #Debate #ImWithHer pic.twitter.com/SQ4oyerIVf

And here's what Trump/Pence would do. #Debate pic.twitter.com/bK3elm72DG