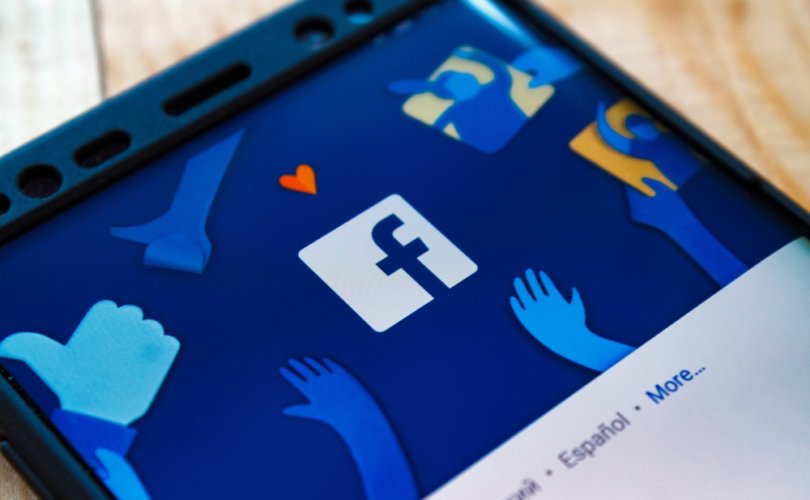 UNITED STATES, October 9, 2020 (LifeSiteNews) — With no explanation, Facebook has deleted the page of Restored Hope Network. This marks the culmination of the social media platform’s silencing of the network, described on its website as “a coalition of Christian ministries, pastors, and counselors in the US committed to serving those seeking Christ-centered answers for sexual and relational problems.”

Facebook’s censoring of the organization began in July of this year, when it began removing posts from Restored Hope Network’s most recent conference. Anne Paulk, the executive director of the umbrella organization, told The Christian Post that the removal of the page came without notice. “Their dismissive action — canceling our page as if it never existed, leaving a vague ‘the link may be broken’ message in its place — is shameful. Not even extending us the courtesy of a notification, a chance to offer our side of the very politicized story, is unconscionable.” Paulk is no stranger to cancelation, as her book was removed from Amazon in last year’s purge of titles devoted to helping people overcome same-sex attraction.

Paulk told The Christian Post that Facebook’s recent push to ban content promoting so-called “conversion therapy” is the likely reason for its action. Many states and jurisdictions have already passed laws prohibiting such therapies. She considers “conversion therapy” to be “a deliberately and misleadingly provocative term coined by the LGBTQ activist movement that does not describe any type of actual counseling assistance offered to men and women who struggle with same-sex attraction.”

— Article continues below Petition —
PETITION: Break up Big Tech tyrants and defend free speech
Show Petition Text
116029 have signed the petition.
Let's get to 125000!
Thank you for signing this petition!
Add your signature:
Show Petition Text

Right before Thanksgiving, YouTube deleted a LifeSite video of a distinguished Canadian physician protesting the "unfounded public hysteria" over COVID-19 and accused us of spreading "medical misinformation."

Our account was suspended, and we were prohibited from posting videos on our YouTube channel for one week. And, while that may not seem like a big deal, it's a huge deal for a news organization like LifeSite.

Then, earlier this week, YouTube again suspended our account – this time for two weeks – over an episode of The Bishop Strickland Show wherein Bishop Strickland said he would not take an unethical COVID-19 vaccine.

We were able to appeal the suspension, and our request was granted.

This means that in YouTube's three-strikes-and-you're-out content-policing, idea-cleansing scheme, we are back down to one strike. But, we still face the threat of losing our account permanently.

And, we're not the only ones.

In a recent turn of events, YouTube just announced that it will remove videos alleging widespread voter fraud in the 2020 presidential election.

Thankfully, however, there is a one, big bright spot on the horizon: 48 states filed suit against Facebook just this week.

And, although this seems like a step in the right direction, the draconian measures which YouTube just rolled out, which are already wielded by Twitter, are an assault against free speech.

So, the fight for freedom of speech against Big Tech goes on. And, we must do everything we can to protect it!

Everyone thought the censorship by Big Tech corporations would decrease after the 2020 election, but the truth is that censorship is being felt just as much as it was before the election.

And, given the election outcome, perhaps Big Tech censorship now is even more consequential than it was before the election!

The two biggest social media platforms, Facebook and Twitter, and other Big Tech companies, are still censoring and suppressing stories and posts favorable to conservatives, and especially anything that has to do with election fraud.

Here are a few recent examples:

Then, please SIGN and SHARE this urgent petition, which calls on the Congress, the president, and governors to defend freedom of speech as Big Tech continues their rampant censorship.

In a remarkable development, Republican Senators Ted Cruz and Lindsey Graham have announced that the Senate Judiciary Committee will be issuing subpoenas to Twitter's Jack Dorsey and Facebook's Mark Zuckerburg for their company's suppression of two critical expose news stories about how Hunter Biden and the Biden Family allegedly profited from business deals made because of Joe Biden's position as Vice President.

Please WATCH LifeSite's exclusive video of the announcement by Senator Ted Cruz below.

According to the Chairman of the Senate Judiciary Committee, Senator Lindsey Graham, the subpoenas will be issued next Tuesday, for hearings to be held on Friday of next week.

This is a MASSIVE development, and should be welcomed by those who champion freedom of speech.

Yesterday, Twitter and Facebook suppressed a NY Post story about how Hunter Biden allegedly profited from introducing a Ukrainian businessman to his then-Vice President father, Joe Biden. The story also alleges that Vice President Biden then subsequently pressured Ukrainian authorities to fire a prosecutor who was investigating the businessman's company.

And, just this morning, Twitter suppressed another expose by the NY Post alleging that the Biden Family improperly profitted from deals made with one of the largest Chinese energy companies because of Vice President Biden's position in government.

But, right after the story broke, Senator Cruz tried to share the latest story on Twitter and was blocked. Twitter says that they are blocking the stories because they claim that the information was obtained illegally. However, Twitter showed no problem allowing illegally obtained information about President Trump's tax returns to be shared.

Please SIGN and SHARE this urgent petition, which calls on the Congress, the president, and governors to defend freedom of speech as Big Tech continues their rampant censorship.

Big Tech is out to kill free speech. LifeSite is out to protect it!

LifeSite has been digging deep into the many claims of liberal bias and selective censorship of pro-life, pro-family, and conservative voices on social media.

And, we are now launching our new series 'Uncensored: Big Tech vs. Free Speech', which will unpack how the actions of Big Tech censors actually affect conservative and Christian organization and individuals.

Please WATCH the first video in our series featuring Brigitte Gabriel, the Founder of ACT For America, one of the nation's premier national security grassroots organizations.

Ms. Gabriel's organization, ACT For America, has been targeted by Big Tech especially in the manipulation of search results.

Big Tech “think[s] they are God and they are exercising their godly power over everybody else,” Gabriel explained. "Because in today's world, anytime you want to find out any information about somebody, what do you do? Google. You go to the internet to find out some information about them. When you research anything about somebody, the first thing that comes up [in the search results] is the Southern Poverty Law Center’s labeling of ‘hate groups.’”

They can and do sway elections and public opinion in whatever direction they want, primarily by manipulating search results, tracking our online behavior, and by blocking truthful content from their platforms.

Today, LifeSite is starting to fight back, with facts and with stories of conservatives and Christians who are being negatively impacted by Big Tech's liberal bias.

Please continue to follow our 'Big Tech vs. Free Speech' series which aims to launch a new video each week for the next eight weeks.

And, please sign our petition demanding that Big Tech monopolies are broken up. Thank you!

The outrageous erasing of the White Coat Summit from the internet is only the latest in a long series of brazen acts of censorship against conservatives and all those who support legitimate free speech.

You may agree or disagree with the efficacy of Hydroxychloroquine against the coronavirus, but everyone should agree on this point:

No Big Tech company should have the power to erase from the internet the medical opinions of licensed practicing doctors simply because they do not like what they have to say about the coronavirus or their experience treating it.  Americans and other free peoples do not need leftist computer programmers deciding what the best course of medical treatment is for them.

Google/Youtube, Facebook, Twitter, Apple and their Big Tech friends want to control what you see, what you read, what you think, and ultimately, how you vote.  Not only do they spend hundreds of millions of dollars on lobbying congress and buttering up big Washington DC think tanks, but now they brazenly and directly censor any content they don't want you to see.

Big Tech, like other interest groups, aggressively lobby to help their businesses thrive, but increasingly, Big Tech is using blatant internet censorship to impose its radical world view over those they consider to be "deplorables."

This must stop, but it won't unless we demand it as forcefully as legally possible.  We believe that we have reached the point were Big Tech must be broken up if legitimate free speech is going to survive and continue to thrive on the internet.

In 2016, emails revealed by Fox News' Tucker Carlson proved that Google tried to influence the election by affecting voter turnout.  Thankfully they failed.  But they didn't give up.  Instead, they have been preparing and testing how to manipulate information to continue to abuse their monopolistic power.

And the Coronavirus has just made things worse.  You see, scared people are more easily manipulated into giving up their freedom of speech.  Children are being kept from going to school, tens of millions of Americans are out of work, and rioting has broken out in most major American cities.

Some experts, like Dr. Robert Epstein, a behavioral psychologist who has testified before congress against Big Tech believes that we may already be too late to control Big Tech's tyrannical control over information.

President Trump took a step in the right direction with his Executive Order calling for increased regulation of Big Tech.  But much more can be done and needs to be done right now.

In an era where almost everything is polarized, there is an overwhelming support for breaking up the Big Tech monopolies.  A recent Pew poll found that 75% of Americans believe that Big Tech companies have too much influence.

It is time to bring serious accountability to Big Tech for their attempts to use their monopolies to kill free speech.

It is time to break up Big Tech.

Restored Hope Network endorses a “Transformational Ministry” approach to helping individuals deal with unwanted same-sex attraction. This approach is based on a “transformational, life-changing experience of submitting to Jesus Christ as Lord,” together with pastoral support and professional counselling.”

Considering their clearly stated approach, Christian psychotherapist Andrew Rodriguez sees Facebook’s censorship of Restored Hope Network as an instance of persecution for religious views. He is urging people to “tell Facebook they are practicing discrimination against a minority group increasingly being persecuted by the media and government — ex-gays and non-LGB people with SSA, Questioning people, and trans-desisters and detransitioners.”

This is the purge I warned about.  Restored Hope Network is the largest umbrella organization for ministries that help…

Amazon bans books on gay ‘conversion therapy’. Is the Bible next?