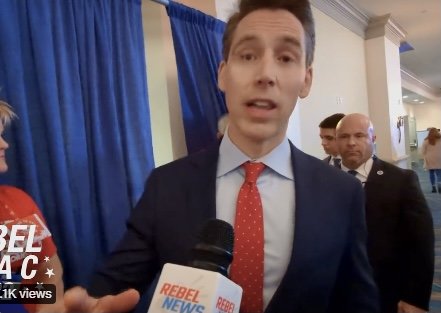 (LifeSiteNews) – Republican U.S. Sen. Josh Hawley of Missouri said that Canada needs to be put on a list of nations that are “religious liberty violators” due to the continued jailing of Canadian Christian pastor Artur Pawlowski.

“The United States keeps a designation of folks who are religious liberty violators… I’ve called for Canada to be put on that list.”https://t.co/lupCtX6qvo to help fund his legal defence.pic.twitter.com/o4ZLaZBMPE

“The United States keeps a designation of folks who are religious liberty violators,” Hawley said to Rebel News at the Conservative Political Action Conference (CPAC) in Orlando, Florida this past weekend, after being asked about Pawlowski.

“I’ve called for Canada to be put on that list, and I think we need to consider all of the options that are available.”

Last month, a provincial judge denied Pawlowski bail, claiming he was a threat to “public safety” because he refuses to comply with COVID health rules.

As a result, Pawlowski is still behind bars, where he will stay until a hearing takes place on March 11.

Hawley previously called out Canada after the arrests of pastors, which mostly happened in the province of Alberta under its “conservative” and Catholic Premier Jason Kenney.

Hawley notably spoke out against the June 15, 2021 arrest of Calgary Pastor Tim Stephens. The evangelical preacher was hauled away by police with his weeping children looking on, all because he held an outdoor church service contrary to COVID rules.

This is not the first time Hawley has suggested Canada be put on a watch list for violating religious freedoms.

Last summer, he said that he was “troubled” that our “Canadian neighbors are effectively being forced to gather in secret, undisclosed locations to exercise their basic freedom to worship.”

“Frankly, I would expect this sort of religious crackdown in Communist China, not in a prominent Western nation like Canada,” Hawley added.

Last year as well, Hawley wrote a letter blasting the news that Canadian churches were being forced to worship underground.

As for Pawlowski, he was arrested for the fifth time on February 8 by an undercover SWAT team just before he was slated to speak at a peaceful Freedom Trucker protest at the Alberta/U.S. border near Coutts, Alberta.

The police had been staking out the Christian preacher’s home, according to Pawlowski’s son, Nathaniel.

Pawlowski’s supporters have been holding daily protests in support of the preacher outside the Calgary jail, where he is being held, demanding his immediate release. They have said they will gather outside  every day until he is released.

Pawlowski made international headlines after he and his brother, Dawid Pawlowski, were arrested in a first highway takedown in May 2021 for holding worship services contrary to Alberta’s COVID rules affecting church service capacity limits.

He and Dawid spent a total of three nights in solitary confinement.

Pawlowski is still in jail despite Kenney lifting a province-wide mask mandate Tuesday, after earlier ditching the COVID vaccine passport amid the trucker Freedom Convoy and border protests in Alberta.

Kenney has admitted the vaccine passport system was effective in essentially coercing people to take the abortion-tainted experimental jab.