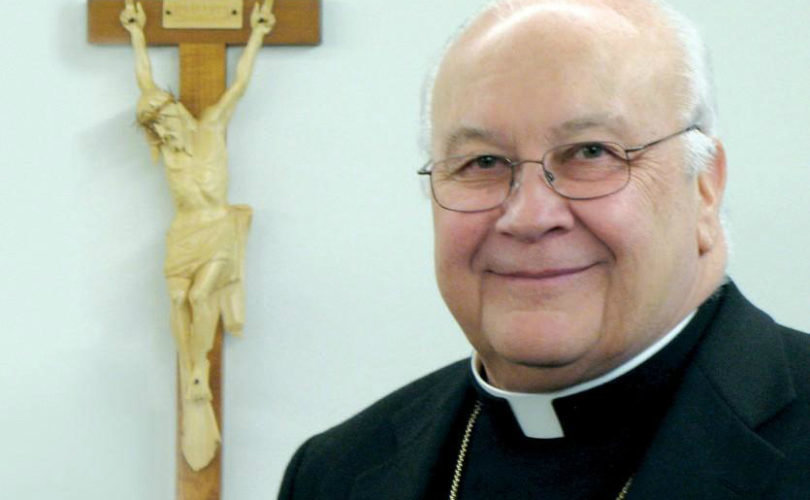 SOMERVILLE, NJ, March 25, 2015 (LifeSiteNews.com) – Bishop Paul Bootkoski is playing defense these days, as a series of radio commercials urge Catholic faithful around the country to call the bishop and ask why a Catholic schoolteacher may lose her job for rejecting arguments for gay “marriage” on her private Facebook page.

The Lepanto Institute, headed by Michael Hichborn, aired two radio ads during the Rush Limbaugh's and Sean Hannity's radio shows on WOR on two days. “It's wrong that a Catholic school teacher is fired for defending Catholic teachings on a Facebook post,” he said.

Last Friday's ad encouraged listeners to “call Bishop Bootkoski now, 732-562-1990” and “ask him whose side he's on: Catholics who defend our faith or Hollywood liberals who mock it.”

“Tell Bishop Bootkoski to put our values ahead of political correctness,” he said.

Another ad that ran yesterday accused the bishop of “trying to cover up her firing.”

Controversy and confusion has surrounded Patricia Jannuzzi who – depending on whose story you believe – is or was a 57-year-old teacher of theology at Immaculata High School in New Jersey.

On her private Facebook account, she denied that the U.S. Constitution demands that marriage be redefined. The 14 Amendment, she wrote, did not elevate homosexuality to the same level as race or disability, and “We need healthy families with a mother and a father for the sake of the children and humanity.”

Hollywood star Susan Sarandon, whose nephew was one of Jannuzzi's former students, caused the comments to go viral and inspired a backlash calling for Jannuzzi to be silenced.

“The teacher’s comments were disturbing and do not reflect the Church’s teachings of acceptance,” Bishop Bootkoski, who leads the Diocese of Metuchen, said in a statement.

The diocese and Jannuzzi's attorney, David Oakley, are telling conflicting stories about whether the teacher – who is a breast cancer survivor – has been terminated over the post.

In an open letter to the bishop, Michael Hichborn asks for His Grace to be more specific. “What was disturbing about Mrs. Jannuzzi’s comments?” he asked. “What did Mrs. Jannuzzi say that did not reflect Catholic teaching?”

“Was her comment regarding the slow extinction of western civilization disturbing?” he asked. “Considering the fact that no less than five cities (Sodom, Gomorrah, and three others) were completely incinerated for one of the four sins which cry to Heaven for vengeance, it seems that her only misstatement was the use of the word 'slow.'”

“As you can see, Your Excellency, the situation is confusing for the faithful, which is why a clear explanation from you is so needed,” he stated.

Hichborn concluded by saying that “the world is engaging in an all-out assault on the Church’s moral teachings and that our freedom to openly practice our faith is in grave danger. Please reexamine and reconsider the injustice being done to a faithful Catholic teacher in your employ.”

Noting the respectful tone of Hichborn's letter, Frank Walker, the assistant news editor of PewSitter.com, wrote, “It's unfortunate that we are placed in a position to have to be so gentle and respectful toward such men, is it not?”

“Who has done this to us and what have we done to enable them?”