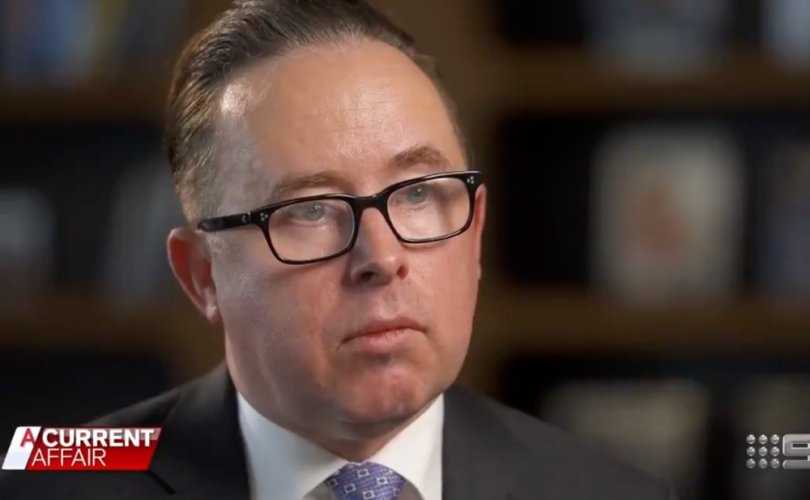 Appearing as a guest on the Australian television program A Current Affair, Joyce was asked by hostess Tracy Grimshaw, “Alan, when there is a vaccine, are you going to require all of your passengers to be vaccinated before they get on a plane?”

Joyce responded, “Yeah, we are looking at changing our terms and conditions to say, for international travelers that we will ask people to have a vaccination before they can get on the aircraft. Whether you need that domestically, we’ll have to see what happens with COVID-19 and the market, but certainly for international visitors coming out and people leaving the country, we think that’s a necessity.”

#BREAKING: QANTAS CEO confirms that proof that you've been vaccinated for COVID-19 will be compulsory for international air travel onboard his aircraft. #9ACA pic.twitter.com/dhk3Hsnxn9

Joyce indicated that such a requirement is likely to become an industry standard. “I think that’s going to be a common thing, talking to my colleagues in other airlines around the globe,” he said.

Harsh responses to this announcement came swiftly. As reported by Lauren McMah of news.com.au, these included “calls to boycott Qantas.”

“His comments sparked an immediate wave of fury from people who objected to the policy,” she wrote. A number of Twitter users angrily weighed in.

I will never use Qantas ever again and I hope the world boycotts any company that uses this behaviour. ✌️

Forcing a medical procedure upon a person against their will is a violation of the Nuremberg code.

Making a potentially dangerous and unnecessary vaccine a mandatory condition before flight is a step too far. I wont be flying with @Qantas again until this rule is abolished.

Qantas could have gone with any number of options. Rapid testing. Proof of negative test on flying but it's attempting to force a medical decision on customers. Im not anti vax. I'm vaccinated. I am also vehemently anti corporate bullying under the guise of “health”.#CovidAu

This announcement comes while there is an international struggle between a push for vaccine mandates on one side, and resistance for such invasive measures emerging in response.

Australian Prime Minister Scott Morrison stated in August that he expects a COVID-19 vaccine will be “as mandatory as you can possibly make it.” Following a significant and immediate backlash, he walked back his comments saying there will be “no compulsory vaccine but there will be a lot of encouragement and measures to get as high a rate of acceptance as usual.”

— Article continues below Petition —
PETITION: No to government and corporate penalties for refusing COVID-19 vaccine
Show Petition Text
102718 have signed the petition.
Let's get to 125000!
Thank you for signing this petition!
Add your signature:
Show Petition Text

In September LifeSiteNews drew attention to the fact that the state of Western Australia passed a law that allows police officers or other “authorized officers” to “restrain individuals and, if deemed necessary, forcibly remove their underwear in order to administer a vaccine.”

However, an attempted clarification offered that “[t]hese powers are only enforceable under a public health state of emergency, as was declared in Western Australia on 23 March 2020, in response to the COVID-19 pandemic.”

“The government should have declared the emergency over months ago,” Dr. Rocco Loiacono, senior lecturer at the Curtin Law School in Western Australia, told LifeSiteNews at the time, “but of course they will not now relinquish these newfound powers.”

Originally an Irish national, Joyce also affirmed interest in establishing “an electronic version” of “a vaccination passport” to be required for all international travelers.

Joyce and his longtime “partner,” Shane Lloyd, live in an inner-city suburb of Sydney.

Australian Prime Minister: COVID vaccine will be ‘as mandatory as you can possibly make it’