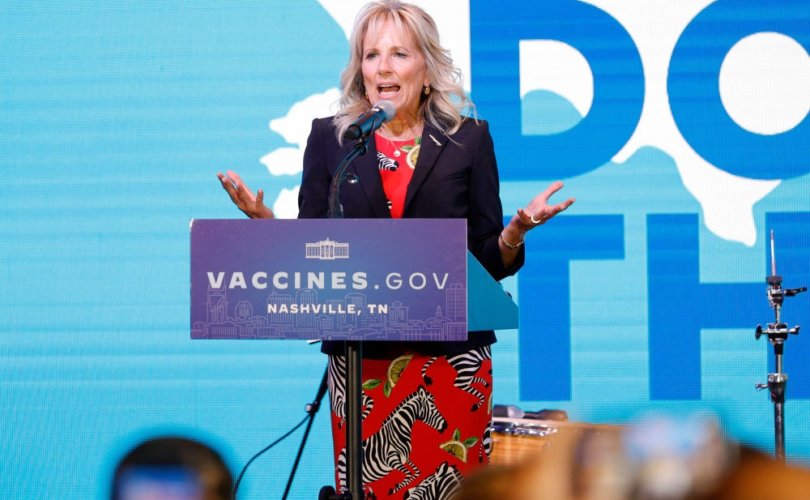 (LifeSiteNews) — U.S. President Joe Biden’s wife Jill has become the latest high-profile figure in recent weeks to test positive for the coronavirus, despite having received the initial two-dose regimen of the experimental COVID shot and two booster jabs.

Elizabeth Alexander, the First Lady’s communications director, made the announcement Tuesday, noting that Mrs. Biden is experiencing only “mild symptoms.”

“After testing negative for COVID-19 on Monday during her regular testing cadence, the First Lady began to develop cold-like symptoms late in the evening,” Alexander said in the statement, adding that Biden had “tested negative again on a rapid antigen test” Monday evening but received a positive result from a PCR test.

“The First Lady is double-vaccinated, twice boosted, and only experiencing mild symptoms,” the statement read.

Dr. Jill Biden has tested positive for covid despite four covid shots. The fifth covid shot would have definitely kept this from happening. Really disappointing she hadn’t gotten one already. The Biden’s need to take the virus more seriously. They are going to kill my grandma.

The wife of U.S. President Joe Biden will reportedly begin a prescribed course of Paxlovid and enter isolation for a minimum of five days, after which she will exit isolation upon receiving two consecutive negative tests.

The news comes as the Bidens are currently vacationing in South Carolina. Joe Biden was seen boarding Air Force One with his scandal-ridden son Hunter last week, just days after the unprecedented FBI raid on the residence of former President Donald Trump that stunned the nation last week. The White House has insisted that Biden had no advance knowledge of the raid.

Meanwhile, Jill Biden isn’t the only high-profile figure to test positive for the virus despite having received multiple doses of the experimental mRNA injections.

U.S. Secretary of Defense Lloyd Austin, who has presided over jab mandates for military members, announced Monday that he had tested positive for COVID-19 for the second time this year despite being “fully vaccinated” and twice-boosted against the virus, LifeSiteNews reported.

The same day, Pfizer chairman and CEO Albert Bourla said he had contracted the virus despite having received multiple shots of his own company’s injection for the virus.