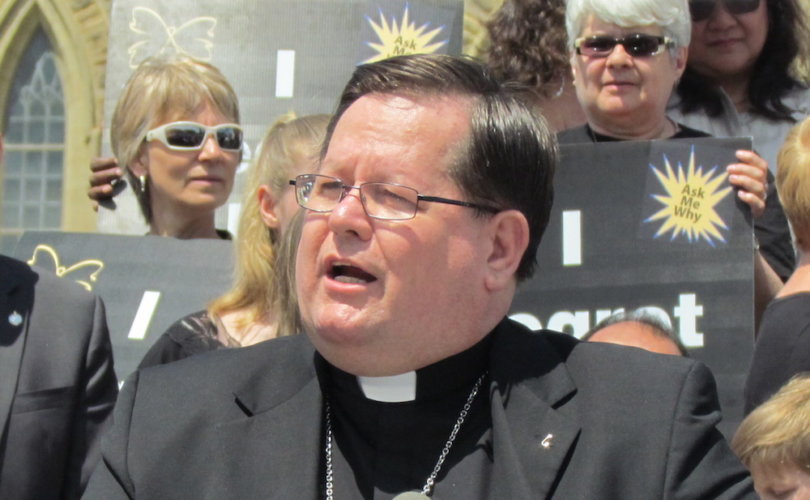 Canadians must 'prevent the suicidal mode by choosing to recognize the dignity of life,' says Cardinal Gerald Lacroix.Patrick Craine / LifeSiteNews

QUEBEC CITY, June 1, 2016 (LifeSiteNews) – As Canada’s Senate begins to consider the controversial Bill C-14 regulating euthanasia and assisted suicide, the Catholic Primate of Canada, Cardinal Gerald Lacroix, has made a strong appeal to all Canadians to show compassion and “unconditional love” to those faced with an incurable condition causing severe pain and suffering.

Cardinal Lacroix, the archbishop of Quebec City, made his plea for compassion, along with a closely-reasoned argument against medical assistance in dying, with a pastoral letter and a video in both English and French, after Bill C-14 was passed by the House of Commons but before it has been considered by the Senate.

The prelate addressed his letter especially to those whose own severe medical condition qualifies them for euthanasia or assisted suicide. “The life you have received, the breath that sustains you, the personality that characterizes you are imprinted with beauty, nobility and greatness,” he writes.

He then counters the underlying assumption of euthanasia advocates that a person with a terminal illness has nothing left to live for. “What you have been, what you are today require, among other things, respect, accompaniment and appropriate care to help you grow to the very end,” he writes.

He changes gears quickly as if to defeat the expected attack from the euthanasia advocates that the Catholic Church loves and encourages suffering. Not so, he argues: “Yes, faith can give a sense to suffering, but Christians, just like Jesus, wish to avoid suffering when possible.” He cites Christ’s prayer from the Garden of Gethsemane: “Father, if you are willing, remove this cup from me; yet, not my will but yours be done” (Luke 22:42).

The cardinal then appeals to all Canadians to relieve the mental distress of the sick and the dying, by listening “to that person express to the very end his or her suffering and fear…The calls for assistance in dying usually disappear when suffering people are well accompanied,” he explains, citing palliative care workers he has consulted.

Cardinal Lacroix then argues for the rights of both palliative caregivers and doctors to refuse to co-operate with medical assistance in dying in any way: “Their objection of conscience must be protected. If a doctor does not wish to refer a patient to his medically provoked death, the doctor’s wish must be respected without being questioned.”

He then argues against the danger that euthanasia and assisted suicide, once they are granted, will expand beyond their legal restrictions. “Not only does the law dictate, but it educates and gives a demand of the right and a suggestion of duty. With time, customs are affected and the rarity of the gesture cedes way to habit.”

Cardinal Lacroix concludes by urging individuals with acts of “gentleness and tenderness” towards the very ill to “prevent the suicidal mode by choosing to recognize the dignity of life.”