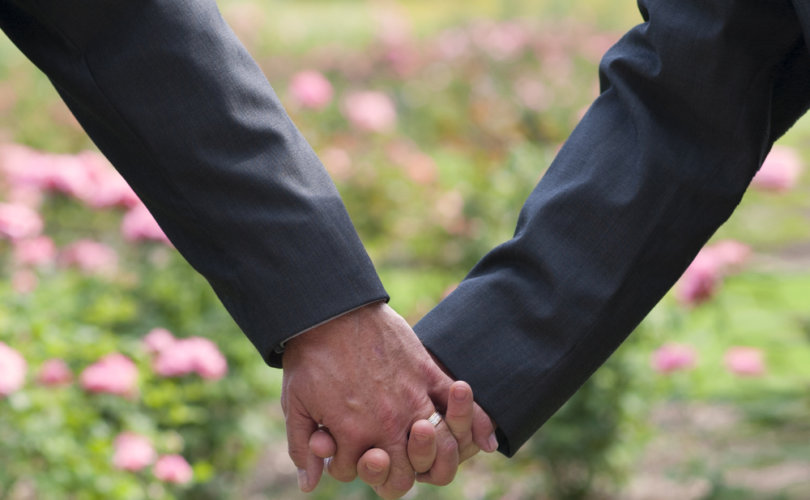 CHICOUTIMI, Quebec, May 27, 2016 (LifeSiteNews) — A Quebec Catholic parish invited same-sex and cohabitating couples to “renew their conjugal commitment” in a “Feast of Love” last month.

Sainte-Anne’s Parish in the Diocese of Chicoutimi decided to move away from its annual “Feast of Fidelity” honoring married couples, in favor of the new event, because Pope Francis has said not to judge, says Father Sylvain Gravel.

The April 23-24 Feast of Love, announced in the parish bulletin a week earlier, was “simply to recognize all forms of love,” Gravel told LifeSiteNews in a telephone interview, adding that inspiration for the event was “le nouveau pape” and his famous injunction, “Who am I to judge?”

“For Francis, the person is the best,” observed Gravel in his halting English. “He is a person.”

Gravel is one of three priests, including “moderator” Fr. Mario Tremblay and Fr. Gérald Linteau, who along with the Valin pastoral council oversee the running of Sainte-Anne’s mega-parish, an amalgamation of three parishes with seven church buildings between them.

The Valin pastoral council decided this year, “in openness to all couples of today,” to change the annual Feast of Fidelity — traditionally, a celebration for couples celebrating 25, 40, 50 or 60 years of marriage — to the Feast of Love, reads the bulletin announcement, translated on a blog by François Tremblay.

According to the announcement, the Feast of Love is intended to “welcome any couple who desire to celebrate their love and to renew their conjugal commitment, whatever the type of commitment (be it Catholic marriage, civil marriage, common law spouse or of the same-sex, and whatever the number of years (1 year, 8 years, 25 years, 57 years, 62 years,…).”

“We consider that any couple commitment is important,” it reads. “We invite you to come celebrate your love with us, to renew your commitment in couple life, and to allow us to entrust you to the Lord in this beautiful commitment of yours.”

Gravel told LifeSiteNews that Chicoutimi’s Bishop André Rivest knew about the Feast of Love and that “he’s okay, for me, he approve.”

But Jacques Bouchard, diocesan communications director, denied this in an email to LifeSiteNews.

“The diocese is not in agreement with this feast,” Bouchard wrote.

When asked if Gravel knows he cannot hold such events in the future, Gravel replied that: “He has met with the bishop.”

When asked if Bishop Rivest would support a future Feast of Love or similar event celebrating same-sex and co-habitating couples in a Catholic parish, if it were held separately from the traditional Feast of Fidelity, Bouchard replied: “Non.”

He did not specify what actions, if any, the diocese was taking to prevent such events in the future, noting, “This concerns internal management.”

Blogger Tremblay, who recently returned to his hometown Chicoutimi from Montreal, says it was clear that “there’s something wrong in some way” in the diocese when in 2008, Rivest refused to allow the traditional Mass, even though about 200 people petitioned for it and there was a priest willing to celebrate the Mass in its ancient form every week.

“We want clear doctrine preached,” he told LifeSiteNews, adding that the lack of such clear preaching is a principle reason “why our diocese is closing churches and we don’t have much young people going to church.”

The 31-year-old, who credits the traditional Catholic priests he met at age 19 for his own strong faith, contends that “there’s a lot of modernism” in our diocese. We are more afraid of the traditional Mass than people doing that ‘Feast of Love,’ that’s what I see.”

“We’re not against our bishop, our diocese,” noted Tremblay. “We love them. We want to help. We want people to know, so that things like that don’t happen again.”

The Catechism of the Catholic Church teaches that “homosexual acts are intrinsically disordered” and can never be condoned, and that the homosexual inclination itself is “objectively disordered” (2357, 2358).

Pope Francis elaborated on his July 2013 remark in the January 2015 book, The Name of God is Mercy: “On that occasion I said this: If a person is gay and seeks out the Lord and is willing, who am I to judge that person? I was paraphrasing by heart the Catechism of the Catholic Church where it says that these people should be treated with delicacy and not be marginalized.”

He added: “And people should not be defined only by their sexual tendencies: let us not forget that God loves all his creatures and we are destined to receive his infinite love. I prefer that homosexuals come to confession, that they stay close to the Lord, and that we pray all together.”

Francis had preceded his 2013 remark, part of a long answer to a reporter’s question about an alleged “gay lobby” in the Vatican, with these statements: “I still haven’t found anyone with an identity card in the Vatican with ‘gay’ on it. They say there are some there. I believe that when you are dealing with such a person, you must distinguish between the fact of a person being gay and the fact of someone forming a lobby, because not all lobbies are good. This one is not good. If someone is gay and is searching for the Lord and has good will, then who am I to judge him?”

In his exhortation Amoris Laetitia, Francis stated: ”There are absolutely no grounds for considering homosexual unions to be in any way similar or even remotely analogous to God’s plan for marriage and family” (p. 251).