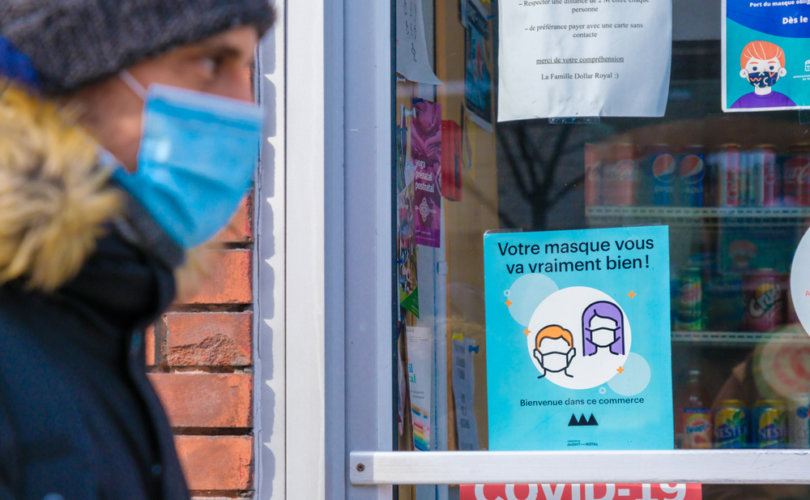 Quebec Life Coalition has launched “Initiative Le Québec prie” (Initiative Quebec Prays) to pray for an end to the measures being implemented by premier Francois Legault. In addition to Quebec Prays, the group has also launched a “Canada Prays” initiative to encourage Catholics from across the nation to join Quebecers in prayer as provincial leaders continue to violate the rights of Canadians.

“As for why this prayer initiative is needed, my answer would be: there is no merely natural way of getting our civilization out of the death-spiral it is engaged in. Even before the corona crisis, Christian Civilisation was in an advanced state of dissolution. Abortion, euthanasia, the violation of marriage, and many other evils were rampant and even promoted by most Western governments,” Quebec Life Coalition President Georges Buscemi told LifeSiteNews via email.

“The immediate goal of the prayer initiative is to get rid of what I call the ‘Covid regime,’ that is, to get rid of all restrictions on freedom imposed under the pretext of covid-19. But the prayer campaign aims at something broader and more lasting. It aims at the recognition of the Queenship of Mary over our society, and thus the recognition of the Kingship of Christ over not only individuals but states,” he added.

Currently, Quebec is the most restrictive province in Canada, with Legault going as far as saying he is going to start taxing the unvaccinated, as well as barring them from big-box stores such as Costco and Walmart, after already having axed their ability to go to restaurants, bars, theaters, event venues, gyms, and churches.

Explaining that this type of public rosary prayer initiative originated in Austria during the Second World War, leading to the Russians “miraculously retreating” from the country in the mid-1950s after a decade of public prayer, Buscemi said his goals for Quebec and Canada are the same as the Austrians’ were decades ago.

“The constitution of the prayer initiative states that ‘It is a question of entrusting our nation to Our Lady and asking her for her help for all the inhabitants in the current crisis to find peace and freedom in society and respect for order and natural and divine law.’ But we will need a miracle to get our societies to base their legislation on natural and divine law, which is the only way true peace can be achieved, in the womb and outside, in our families and in society in general.”

Despite the overtly Catholic goal of submitting Quebec and Canada to Our Lady, some of the local Catholic clergy have decided to distance themselves from the initiative.

“We are for prayer … And we are also for the vaccine,” said Bishop Luc Cyr of the Archdiocese of Sherbrooke, telling local media that neither he nor “any other representative of the archdiocese” will take part in the initiative.

The Archdiocese of Quebec, which voluntarily cancelled all Christmas Masses in 2021, cited the spread of the omicron variant and expressed concern with the initiative.

“Coming together to pray is beautiful and powerful. But in this case, who is making this invitation? To pray to ask for what?” asked Valérie Roberge-Dion, Cardinal Gérald Lacroix’s press secretary. She added that the archdiocese had already previously withdrawn support for Quebec Life Coalition over the group’s promotion of “conspiracy theories,” its rejection of the abortion-tainted vaccines, and statements criticizing Pope Francis.

“My thoughts about the bishops’ apprehension to support the prayer initiative are twofold. First, I think it’s normal to keep an arms’ length from new initiatives of any kind, just out of pure prudence. On the other hand, I find it extremely unfortunate that the vast majority of  bishops do not, at least in public, express any apprehension or concern about the serious societal crisis occurring under what could only be called the Covid regime, established under the pretext of fighting a moderate disease, lethal mostly to the very elderly,” Buscemi told LifeSiteNews while addressing the lack of institutional support for the initiative.

Even while ignoring the millions of reported injuries, thousands of reported deaths, and waning efficacy of the experimental COVID-19 injections, many Catholics, including high-ranking clergymen, oppose the shots on religious grounds, as all the currently available shots have links to abortion.

“No one who is really deeply concerned about the defense of life and the moral law can be silent or can be quiet and can resign to this situation,” he added.