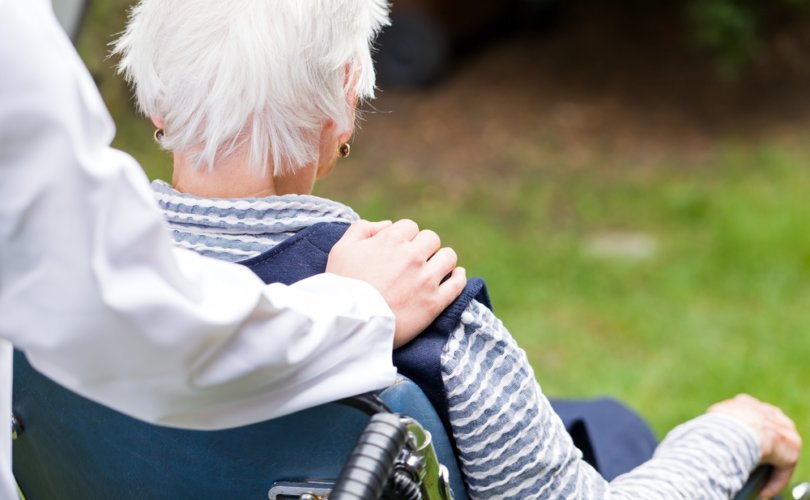 QUEBEC CITY, December 6, 2019 (LifeSiteNews) — The Quebec government is opening public consultations on allowing doctors to euthanize sick people with Alzheimer’s, dementia, and other degenerative diseases who are no longer able to give their consent.

Coalition Avenir Québec’s Health minister Danielle McCann announced at a press conference last week that all parties support consultations on the recommendations of an expert panel that spent 18 months studying the issue of prior consent, reported the Montreal Gazette.

The panel recommended that individuals who received a diagnosis of a serious and incurable illness, including Alzheimer’s or dementia, can give an advance directive to be killed at some future time when they are no longer competent to consent.

It also recommended “authorizing a third party to inform physicians of the existence of a prior consent in the event a person loses their faculties. The third party authorization would be kept in a government registry as a permanent record,” the Gazette reported.

Quebec’s current euthanasia law specifies that Quebecers cannot be euthanized unless they fulfill all the following criteria: They are at least 18 years of age; suffer from a serious, incurable illness; are in an advanced state of irreversible decline in capability; experience constant and unbearable physical or psychological suffering that cannot be relieved in a way they deem tolerable; are at the end of life; and can give informed consent.

“We dedicate this announcement to all those Quebecers living with serious and incurable illnesses and who are saddled with persistent and intolerable suffering,” McCann said at the conference.

“We are giving them the power and the freedom to decide and we do this while respecting their will, values and dignity,” she added.

But Alex Schadenberg, executive director of the Euthanasia Prevention Coalition, warned that advance directives means people will be killed against their will.

“This is absolutely crazy, because it will allow euthanasia of someone who may never have wanted it, who might have in fear in an earlier state felt this was what they wanted, and when the time comes, they lose their right to change their mind,” he told LifeSiteNews.

The euthanasia lobbyists say “it’s all about freedom of choice and autonomy, that’s how they sell it. But once you become incompetent, you won’t have a right to change your mind, and this becomes the problem,” added Schadenberg.

Quebec’s current law requires that people be allowed to change their minds “until the last moment,” it said in a press release rejecting the panel’s recommendations.

“A new incapacity implies that we can no longer respond to this demand, often to the displeasure of relatives,” the Vivre dans la Dignité statement said.

“But this principle of consent to the end is paramount,” it stressed. “Remember that it makes the difference between execution and euthanasia.”

Indeed, advance directives led to the horror of a 74-year-old Dutch woman being forcibly euthanized in 2016, Schadenberg pointed out.

The woman had been diagnosed with Alzheimer’s four years earlier, and wrote a statement saying she wanted to be euthanized before entering a care home, but added: “I want to be able to decide (when to die) while still in my senses and when I think the time is right,” according to the BBC.

Deciding the time was right, a doctor slipped a sedative into her coffee, but the woman came to and began struggling. The doctor then told relatives to hold her down while lethally injecting her.

“She didn’t want to die, but they did it anyway. This is exactly what they’re talking about allowing in Quebec,” Schadenberg told LifeSiteNews.

Moreover, a court in The Hague exonerated the doctor September 11, 2019. The judges ruled the physician acted in the patient’s best interests, and that not euthanizing the woman would have undermined her wishes, the BBC reported.

The same day as the Dutch ruling, a Quebec judge struck down as unconstitutional the requirement that an individual must be near death to be legally euthanized.

Baudoin gave both governments six months to revise their legislation, but Quebec opted not to appeal the judgment.

Moreover, Trudeau said during the election campaign that if re-elected, his government would act on Baudouin’s decision.

And the federal Liberals are “also talking about having consultations” on advance directives, Schadenberg told LifeSiteNews.

“The euthanasia lobby is pushing for that,” he said. “So the question is, who’s going to get it done first, the federal government or the Quebec government?”

Quebec, he noted in a recent blog, “has its share of problems with euthanasia.”

Thirteen of the reported deaths did not fit the criteria of the law and three of the euthanasia deaths were for hip fractures.