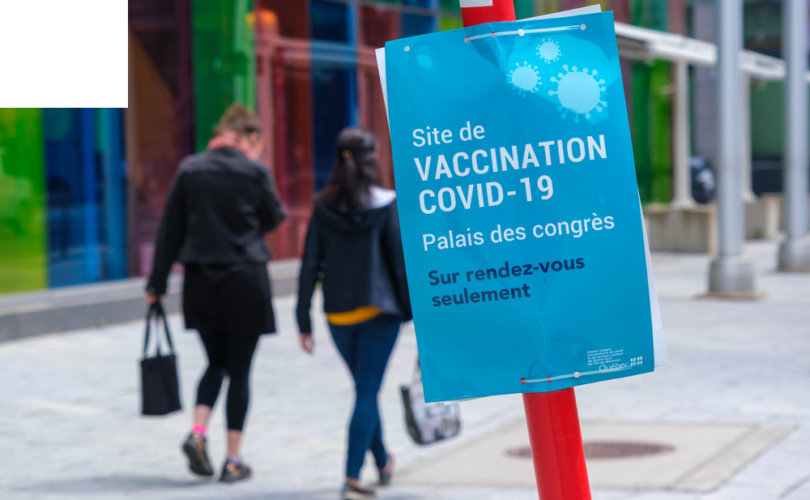 MONTREAL (LifeSiteNews) — A Quebec father had his visitation rights temporarily suspended after the mother told a judge he is “anti-vaccine” and posts “conspiracy” theories on social media.

Judge Jean-Sébastien Vaillancourt of the Superior Court for the District of Montreal handed down a ruling on December 23 that “temporarily” barred a Quebec father from visiting his three children, ages 12, 4, and 7 months,  because he is “unvaccinated” and makes social media posts that express opposition to Quebec’s tyrannical  so-called public health measures.

According to the National Post, the father had petitioned the judge for an additional visitation day over the Christmas holidays with his 12-year-old, at which point the mother told the judge that the request should be denied as she “recently” learned the man was unvaccinated and, according to the judgment, a “conspiracy theorist” and “anti-vaccine.”

The father stated that his vaccination status ought to be irrelevant in the matter, as the 12-year-old child received the vaccine and the other two children are too young to receive the experimental jabs.

Seemingly blind to the irony, the judge noted that since the so-called omicron variant infects the vaccinated, the 12-year-old’s vaccine does not provide sufficient protection for her to be in contact with her father, despite the fact that coronavirus vaccine trials have have never produced evidence

strong evidence that the “vaccinated” are just as likely to carry and transmit the virus as the unvaccinated, meaning the father is of no greater risk to his children than the “fully vaccinated” mother.

Further exposing the mainstream COVID narrative, Dr. Robert Malone, the inventor of mRNA vaccine technology  itself, has said that not only are the unvaccinated not to blame for the spread of the virus, but it is actually the vaccinated who are the “super-spreaders” of the disease.

The push to vaccinate or protect young children comes despite the fact that children face extremely low risk from COVID-19. In fact, last summer, researchers with Johns Hopkins School of Medicine found a “mortality rate of zero among children without a pre-existing medical condition such as leukemia” when they “analyze[d] approximately 48,000 children under 18 diagnosed with Covid in health-insurance data from April to August 2020.”

Providing some consolation, Vaillancourt did state that the restrictions “must be of short duration since the situation related to the pandemic is evolving rapidly, even more so with regard to the Omicron variant, and it may be necessary to reassess the situation in the short term,” while adding that the father should still receive the shots and give his assent to the province’s public health measures.