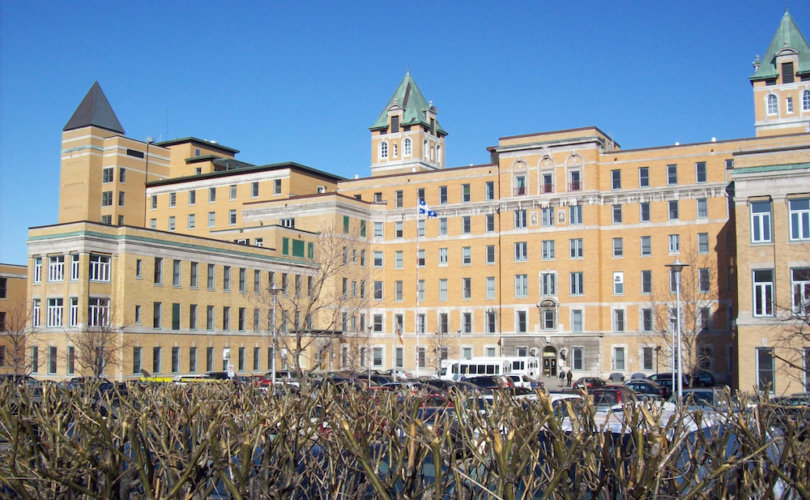 QUEBEC CITY, March 2, 2017 (LifeSiteNews) – A Quebec City hospital that took down an historic crucifix because it offended one person is putting it back at the request of the public, a cardinal, and the provincial government.

Last week, the hospital administration received a written complaint that an 18-inch tall crucifix on the wall between the elevators inside the main entrance of Holy Sacrament Hospital made the person feel “uncomfortable.” What is more, it offended against the official secularism of the Quebec state.

The administration – the Centre Hospitalier de l’Universite Laval (CHU) — promptly removed the crucifix from where it had hung since the Sisters of Charity of Quebec opened the building in 1927.

When Cardinal Gerald Lacroix complained, CHU explained it had no choice. The hospital was now state-owned and run, and CHU had to respect “the religious neutrality of the state. As our primary mission is to offer health care and services, we must first respect the rights of our patients, who are in a sense, held captive by the institution.”

However, CHU administrators were naive if they thought they could resolve Quebec’s complex relations with its religious past so easily. While few Quebecois attend Mass, they expect and receive Church funerals. They also value their Catholic cultural and architectural heritage as factors in their survival on a continent dominated by English speakers. That is why a succession of secularist governments has resisted efforts to remove the crucifix hanging behind the Speaker’s chair in the National Assembly (provincial legislature).

Cardinal Lacroix responded to the crucifix removal on Facebook.

“Like very many Quebecers, I am expressing my distinct disappointment … At a time when we are talking about being tolerant, open, welcoming and respecting differences; the withdrawal of the crucifix … goes exactly in the other direction.”

The cardinal urged the public to complain. He also suggested that CHU could find another way to respect both Quebec’s “neutrality” and its religious heritage. It might accompany the restored crucifix with a plaque explaining the province’s religious “patrimony” and its current secularism.

Then came more than 600 complaints from the public about the removal and what CHU described as “a major threat to its integrity and its leaders.”

However, the final straw was the hostility of the provincial government.

Justice Minister Stephanie Vallee said publicly that a new piece of legislation defining the state’s secularist stance, Bill 62, in no way required Quebec “institutions to remove elements of our heritage.”

Official direction then followed from the Ministry of Health and Social Services.

“This is not about the religious neutrality of the state,” it instructed CHU, “but about respect for the history of the hospital, its religious heritage and character, and above all the respect and gratitude to … the community of the Sisters of Charity.”

Please put the crucifix back up, the ministry requested.

The crucifix was scheduled to go back up late Thursday when the public will be least disrupted. Following Cardinal Lacroix’ suggestion, “an explanatory note” will accompany the figure.

“A wise decision,” the cardinal said.