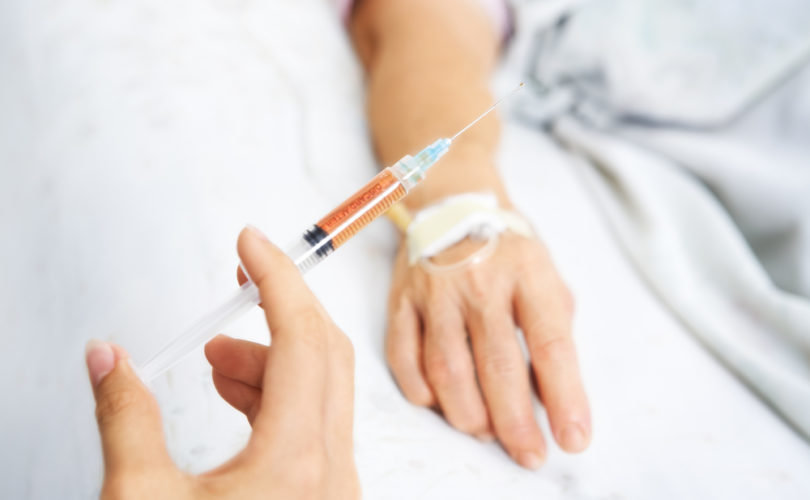 QUEBEC, September 2, 2015 (LifeSiteNews) — Quebec’s professional body regulating doctors, the College des Medecins, has published a how-to manual for doctors wanting to euthanize their patients, along with contents of a death kit to be issued them by pharmacists. These follow closely on the provincial government’s release of draft regulations for doctors, which defenders of the disabled have quickly condemned as inadequate.

“This is sensational,” Amy Hasbrouck of Not Dead Yet, a disabled persons’ rights group opposed to euthanasia, told LifeSiteNews, adding that the Quebec College des Medecins (QCM) has finally got down to grim details. “You can call it ‘physician assisted death’ or ‘medical aid in dying’ but the truth is, doctors in Québec will start killing people in December.”

The National Post termed the how-to package “unlike anything in the history of Canadian medicine.” Inside the anti-first-aid kit, doctors will find: benzodiazepine, a drug to calm the patient while awaiting the fatal dose; a barbiturate to put the patient into a deep coma; and finally a “neuromuscular block” which would kill the patient by stopping his or her heart and lungs. The kit also contains syringes, needles, intravenous tubes and solutions, and a second dose of each drug in case the first doesn’t take.

The whole process “would probably take something around 15 minutes,” Yves Robert, the secretary of the QCM told a news conference.

Meanwhile the Quebec government has released its draft regulations for euthanasia, basically setting out the bureaucratic process set in place to protect patients. It requires the physician to make sure the patient qualifies under the new euthanasia law, by virtue of being in “constant and unbearable” “physical or psychological”  pain, that other medical options have been discussed, that the patient is enrolled in Quebec’s health plan, and that he or she is capable of informed consent. A second doctor must review all the documentation and procedures followed by the first. The whole procedure must be reported to the commission set up to oversee Quebec’s euthanasia regime.

Neither the QCM guidelines nor the government’s draft regulations make any mention of doctor’s conscience rights, notes Sean Murphy, director of the British Columbia-based Conscience Project, a watchdog organization set up to guard the rights of medical personnel.

“The legislation requires doctors who refuse a patient’s request for euthanization for reasons of conscience to report this to a higher authority, and to pass on the patient’s request form,” Murphy told LifeSiteNews. “Some physicians refuse to refer patients to other doctors for euthanasia and may regard this as a form of referral. They could perhaps get around this by refusing to accept the request form in the first place.”

But even though the legislation does not specify objecting doctors must refer to willing colleagues, says Murphy, “it does require them to follow the QCM’s code of ethics. And the code requires doctors to refer to their peers when they conscientiously object to a requested treatment.”

Not only are doctors’ conscience rights unprotected, but, according to Amy Hasbrouck of Not Dead Yet, Canadians with disabilities are not protected either by the government draft regulations.

“All of the safeguards are retroactive,” says Hasbrouck. “The oversight by the Commission won’t help a person who is already dead.” The second doctor’s approval, moreover, is based on the first doctor’s notes, not on a second examination of the patient. When a third party signs the consent form for euthanasia on behalf of a disabled patient, Hasbrouck wants a second doctor or health official present in addition to the attending physician. Not enough attention has been paid in the regulations to ensuring the consent was properly obtained.