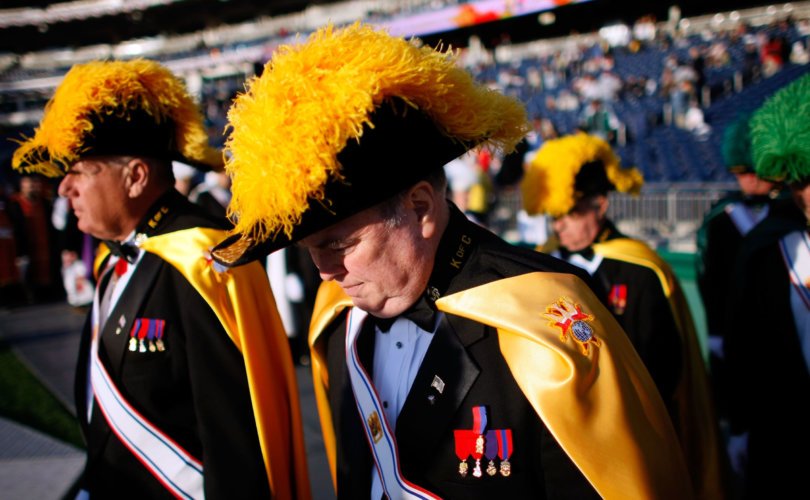 Knights of Columbus in 2008Photo by Win McNamee/Getty Images

SAINT HYACINTHE, Quebec (LifeSiteNews) — The State Council of the Knights of Columbus (KoC) of Quebec has told members that local councils will be required to enforce vaccine passport measures for any member who wishes to attend a meeting in person. The Province of Quebec itself has not mandated vaccine passports for “meetings and general assemblies.”

The decision on behalf of the Quebec KOC to go beyond what the government requires and mandate abortion-tainted vaccines for their members was communicated in a statement released on October 5. The statement was emailed to members and posted on the official website for the Quebec Knights.

The statement, which was released in French only, began with: “The health of our members, and their families, will always be the priority of the State Council, which is why we are implementing, effective today 5 October 2021, the necessary measures to this effect.”

According the official website of the Knights of Columbus, the health of members is not mentioned as part of the mission of the KoC or as a priority. The site states that the mission is “… empowering Catholic men to live their faith at home, in their parish, at work and in their community.” The focus of the KoC has traditionally been understood to be uniting Catholic men in fraternity with a focus on charity and securing members financially through insurance programs.

The letter went on to say that “demonstrating proof of vaccination” — a vaccine passport — “is now obligatory for any activity of a Council, a District, a Region, or an Assembly, whether it is a monthly meeting or a social activity.” Also, anyone who cannot provide proof that they have received two doses of the experimental abortion-tainted vaccine “shall be refused access to the hall.”

The Knights of Columbus are internationally known for strong pro-life advocacy, and are always visible at the annual March for Life. The Knights have historically been consistent with their pro-life stance to the point of refusing to invest their money in companies that advocate for abortion or produce abortifacients. Many Catholic men have chosen to work with the Knights over the years because they could be sure that no promotion of abortion would be linked to the KoC, directly or indirectly.

This will no longer be the case in Quebec, as Quebecois knights will have to receive “two doses of an available vaccine by November 15.” It has been well documented that abortions have been an integral part of the creation and development of vaccines in general, and the COVID jabs are no different. In fact, the aborted children harvested for vaccine production were alive at the time of tissue extraction.

Both the Pfizer and Moderna jabs have been tainted with abortion by their uses of the HEK-293 fetal cell line. Biologist Pamela Acker explained in an interview with LifeSite’s John-Henry Westen in January, “HEK stands for Human Embryonic Kidney, but 293 stands for this is the 293rd experiment that this particular researcher did to develop a cell line. And that doesn’t mean that there were 293 abortions, but for 293 experiments you need far more than one abortion. And we’re talking probably hundreds of abortions.”

A statement from the Pontifical Academy of Life in 2005 stipulated that under certain grave situations, Catholics could reluctantly use a vaccine that had cooperated with abortion in some way, but only “as is necessary in order to avoid a serious risk.” Furthermore, this document that is often used by those who seek to justify Catholic use of abortion-tainted vaccines is a response in reference to moral questions concerning the use of certain vaccines for serious threats that have harmed and killed children. COVID poses no such risk to children, and the survivability rate regarding a COVD infection is astronomically higher than serious diseases that are traditionally dealt with by vaccination.

The same document lists as something that should be considered the notion of the “health conditions of the population as a whole.” There is growing evidence that the available COVID jabs do not prevent transmission. The stipulations for Catholic use of an abortion-tainted vaccine expressed in the 2005 letter from Rome are not met in the case of the COVID jab from a medical perspective.

Catholics around the world are facing grave situations in terms of vaccine coercion. Catholic author and historian Charles Coulombe expressed his dismay at the news out of Quebec to LifeSiteNews. He said, “Tyranny on the part of government officials is an annoying but fascinating part of history; when clerics do it, it is simply evil. But when done by a strictly voluntary organisation whose leadership have made all kinds of changes in the name of attracting new members, it is ridiculous.”

Coulombe is a French speaker of French-Canadian descent. He is also the author of a wildly successful biography of Blessed Charles of Austria.

Along with mandating the jab for members who wish to participate in the activities of the KoC, the Quebec State Council stated that “in accordance with section 163 of the Charter, By-laws and Constitution, any Officer who fails to comply with this standard will be relieved of his or her duties until he or she is adequately vaccinated.” Section 163 of the Charter of the KoC refers to the punitive measures leveled against knights that do not comply with the laws of the KoC. This suggests that the Quebec Knights believe it a legal requirement for knights to partake in abortion-tainted experimental vaccinations.

Lastly, the letter told Quebec KoC groups that in addition to receiving the jab, knights also have to “respect the rules of social distancing” when they gather. It is not clear whether Quebec KoC leadership believes the vaccines are effective.

Richard Paratte, the Sate Deputy of the Quebec KoC, has made it clear that he wants to attract younger men to join the Knights in Quebec. Under his leadership, the organization is mandating vaccines that have been disproportionately harmful and deadly to young men, at rates higher than any risk of serious COVID-related events for the same cohort.