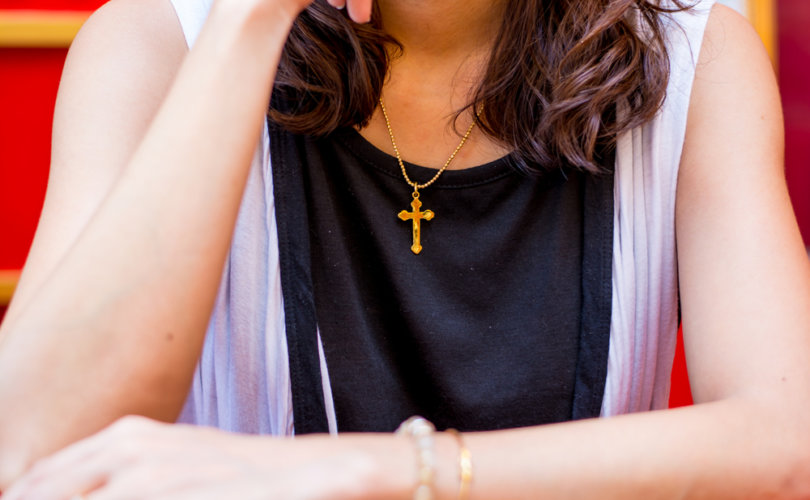 MONTREAL, April 1, 2019 (LifeSiteNews) – The ruling Coalition Avenir Quebec party is proposing a new law prohibiting public officials from visibly wearing “religious symbols” while performing their duties. Christians in public office would no longer be able to wear a cross around their necks. Muslim women would not be able to wear a hijab.

Titled “An act respecting the laicity of the state,” the ostensible purpose of Bill 21 is to assert the provincial government’s “religious neutrality” as to religion and to ensure “a balance between the collective rights of the Quebec nation and human rights and freedoms.”

“The bill proposes to prohibit certain persons from wearing religious symbols while exercising their functions,” an explanatory note on the bill states.

Among the officials affected are public school teachers and principals, judges, Quebec Crown prosecutors, and any government employee authorized to carry a firearm. However, teachers and some other public officials are protected by a grandfather clause in the legislation that will allow them to wear their religious symbols so long as they hold the same position.

Other state employees, including physicians, dentists and midwives in public institutions, workers in subsidized daycares, and school board members would also be enjoined to refrain from wearing religious symbols. If passed, the law would distinguish Quebec from the rest of Canada.

The bill could be applied to crucifixes in public spaces. It could also prohibit public officials from wearing traditional Jewish headgear (kippah), Sikh turbans, and Muslim scarves.

The bill would also require citizens to uncover their faces for identification or security purposes when receiving a public service. This would include using city transportation with a discounted student pass.

In addition, the bill included a notwithstanding clause so as to overcome any potential appeal to Quebec’s Charter of Human Rights and Freedoms. Section 33 of the Charter, for example, allows provincial or federal authorities to override specific parts of the Charter for a period of five years.

“We are very concerned with the new Quebec government's statements regarding a ban on religious symbols displayed by government officials and displayed in public institutions,” said Quebec regional director of B’nai B’rith Harvey Levine in a statement.

He called on the ruling government to “avoid the slippery slope of diminishing fundamental rights” to instead “secure religious liberties for all Quebecers.”

The World Sikh Organization of Canada and the National Council of Canadian Muslims also made statements repudiating the legislation. The feminist Quebec Women's Federation accused the Quebec government of engaging in identity politics rather than secularist principles.

“We reject that the Quebec state should dictate to women what they can wear or not,” the statement said.

Even Prime Minister Justin Trudeau voiced his opposition to the bill, saying: “It's unthinkable to me that in a free society we would legitimize discrimination against citizens based on their religion.”

Bill 21 of Quebec’s provincial legislature was a plank in the successful 2018 campaign of Legault and his Coalition Avenir Québec party, which won 38 percent of the vote in October. The preamble to the bill explains that Francophone Quebec “has its own characteristics, one of which is its civil law tradition, distinct social values and a specific history that (has) led it to develop a particular attachment to state laicity.” This “laicity,” it says, should be “affirmed in a manner that ensures a balance between the collective rights of the Quebec nation and human rights and freedoms.”

The neologism “laicity” is an apparent translation of laïcité, a term that emerged during the French Revolution and its rejection of Christianity. The term is used throughout the bill, but “secularism” is absent.

According to the bill, laicity is based on the separation of state and religions, religious neutrality of the state, equality of all citizens, and freedom of conscience and freedom of religion. The law, if approved, would amend sections of Quebec's Charter of Human Rights and Freedoms to say that Quebec believes “state laicity to be of fundamental importance.”

A sentence in the Charter (“In exercising his fundamental freedoms and rights, a person shall maintain a proper regard for democratic values, public order and the general well-being of the citizens of Quebec,”) would be amended to include “state laicity” after “democratic values.”

Banning religious symbols is not a new idea in the French-speaking province. Six years ago, the then-reigning Parti Quebecois came out with similar draft legislation (Bill 60) to develop a “Charter of Values.” It would have forbidden employees in law enforcement, schools, courts, hospitals, and daycares from wearing conspicuous religious symbols. The bill died the following year as a result of Parti Québécois having lost the election. The “Charter of Values” was largely deemed responsible for the party's loss of power.

While there is no mention of the crucifix that has hung above the Speaker’s chair in Quebec’s National Assembly since 1936, a motion was unanimously adopted by the Assembly last week to remove it to an unspecified location.