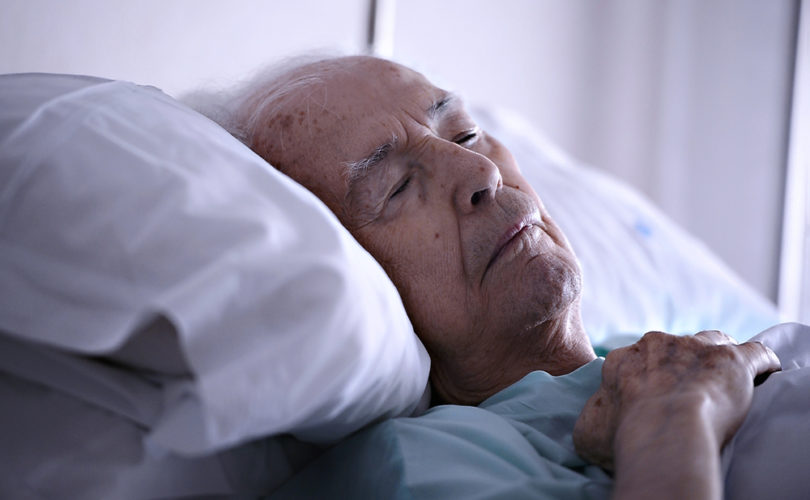 QUEBEC CITY, November 2, 2016 (LifeSiteNews) — Quebec’s commission on euthanasia has revealed that doctors reported killing 262 Quebecers since voluntary euthanasia was legalized in the province in December 2015 and that physicians violated the law in 21 deaths.

But he responded to Commission for End of Life Care’s first annual report by stating he will look into mitigating the one regulation that, according to report, doctors contravened in 18 of the 21 cases in which the laws safeguards were flouted.

That is Bill 52’s requirement for a second physician, independent of the patient, to give an objective opinion that the patient has no hope of recovery.

“In less than a year, not only have they found that the numbers are much higher than anticipated, but they are also already considering opening up the law further in order to reduce the protections in law for people in Quebec,” noted Alex Schadenberg, executive director of the Euthanasia Prevention Coalition. “They’re moving very fast.”

Schadenberg noted that Bill C-14 also requires the opinion of two doctors to approve a request for euthanasia or assisted suicide.

Aubert Martin, executive director of the Montreal-based Vivre dans la dignité, echoed this, pointing to the “growing confusion surrounding the coexistence of the Quebec and the federal laws.”

Barrette recently sent out new ministerial directives to make the practice of euthanasia in Quebec in line with federal law,” Martin told LifeSiteNew in an email.

“It will thus be interesting to see whether our Health Minister feels that the Quebec government has to stay ‘in line with the federal law’ or not,”  Martin wrote. “Because when we take a look at how this issue is dealt with, it seems that it’s all about feelings.”

Barrette has “only talked about removing the second doctor's approval for euthanasia requests, but we can already see that he is planting seeds to do so, even if this would require an amendment of the law,” he added.

“It is shocking to see the contradiction here again,” Martin observed. “On one side, [Barrette] expressed his surprise by the number of euthanasia (three times higher than expected), and on the other side, he is now considering to make the access easier so that more people can be euthanized in rural communities.”

Barrette, who tabled the report in the National Assembly on October 27, told a news conference that in small towns it’s difficult to find a doctor completely removed from the patient and so able to give an objective second opinion, the Montreal Gazette reported.

The commission stated that Quebec’s College of Physicians will review the 21 violations.

Julie White, communications secretary for the minister, confirmed that Barrette asked College of Physicians and the Commission on the End of Life Care to form a committee to “to see if there were some ameliorations to make” regarding the requirement for an independent second doctor’s opinion.

The committee will also look into simplifying paperwork, White told LifeSiteNews in an email. “The works will be done in the following weeks. We will see what the conclusions will [be] before taking some decisions.”

The commission, which reviewed the mandatory reports filed by euthanizing doctors, reported that there were 262 euthanasia deaths between December 10, 2015, when Bill 52 was passed, and August 31, 2016.

Barrette predicted that 300 Quebecers will be euthanized by the end of 2016.

“I mentioned many times that I was expecting about 100,” Barrette told reporters. “It’s almost three times that. Actually, on a one-year period, it will be over 300 … that in itself is surprising to me.”

The commission reported that 87 requests did not result in euthanasia: 36 were rejected under the law, 24 people were approved for euthanasia but decided against it, 21 died a natural death, one person requested a delay, and decisions are still pending on five requests.

The commission found that Quebec City had a proportionately higher rate of euthanasia, with 45 people killed there, as compared with 54 people euthanized in Montreal, which has three times the population.

That reveals the secular nature of Quebec’s nominally professed Catholicism, according to Barrette.

“In Quebec City, there’s some form of homogeneity about the general population — it’s French speaking, Catholic and we know that in Quebec, that group has a different relationship with the religious principles,” the minister said, according to the Gazette. “When we look at the social fabric of Montreal, ethnic communities are more numerous proportionally and often more religious.”

According to the Globe, Barrette said, “When we’re talking about the question of death, Quebec’s Catholic francophones, given their social evolution, their thoughts, are different from other religions.”

Barrette contended that the report is evidence the commission is doing its job and Quebecers can be reassured all is going “very, very, very well,” in the system to provide euthanasia.

American Catholic writer and academic George Weigel recently wrote that during his past summer holiday in rural Quebec, three elderly parishioners he knew “received a diagnosis of cancer at the local hospital, a small-town facility an hour’s drive from cosmopolitan Ottawa and even farther from hyper-secular Montréal.”

After the diagnosis was given, “the first question each of these people was asked was ‘Do you wish to be euthanized?’” Weigel wrote in the National Review.

“That is what the new Canadian euthanasia regime has accomplished in just a few months: It has put euthanasia at the top of the menu of options proposed to the gravely ill.”

“Once again, the extension to euthanasia is moving very fast in Canada,”  the EPC’s Schadenberg echoed. “In less than one year, we have had massive shift and all the rage is how to quickly extend euthanasia and make it easier to be killed.”