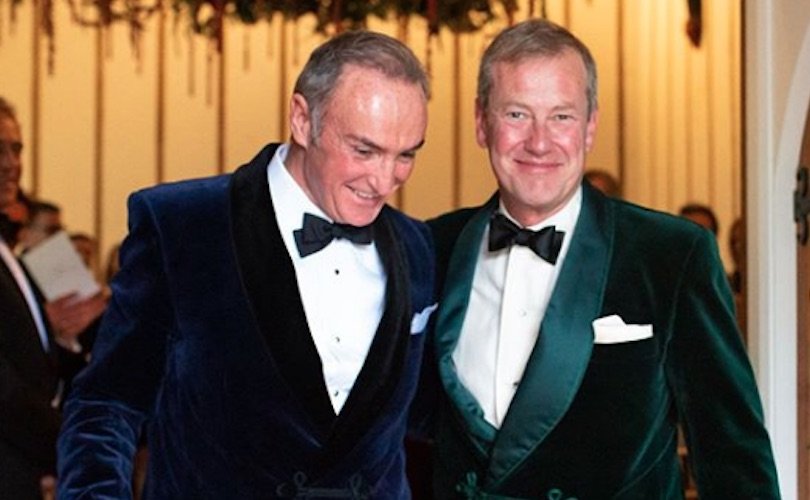 DEVON, England, September 26, 2018 (LifeSiteNews) – The mainstream media have another royal “wedding” to celebrate, this time with an added dose of ideological preening.

The ceremony took place at the private chapel at Mountbatten’s Bridwell Park estate, in front of 60 relatives and friends. Also in attendance were his three daughters and ex-wife Penny, who walked him down the aisle.

No other members of the royal family were in attendance, but Prince Edward and Countess Sophie of Wessex relayed their congratulations.

“Their diaries [schedules] are arranged months in advance and they were not free,” Mountbatten said, “but they adore James.”

In lieu of “wedding” gifts, the two men asked guests to make donations to the spinal injury charity Regain. They are reportedly planning their honeymoon for either Greece or Croatia.

Mainstream media outlets such as People and Yahoo, left-wing magazines like Cosmopolitan and Vanity Fair, LGBT outlets including Out and PinkNews, and even wedding websites such as Brides and Easy Weddings are hailing the ceremony as a milestone.

Mountbatten came out as homosexual in 2016, several years after divorcing his wife, with whom he has three daughters aged 15, 20, and 22 years old. The ex-couple previously explained that Ivar told Penny he was bisexual before their romance began, which she accepted because “I'm very open-minded about sexuality.”

But despite early happiness, his attraction to men eventually gave her feelings of jealousy, inadequacy, and depression. She left after 15 years of marriage, concluding that their relationship could never be “whole” as long as Ivar was attracted to men, and that he “couldn't be his authentic self unless I left.”

She and all three daughters say they have fully embraced Ivar’s homosexuality, to the point where their children came up with the idea of having Penny give her ex-husband away at the “wedding.”

Mountbatten suggested that he would have been content with a same-sex civil partnership, but “marrying” Coyle “seems the right thing to do” with same-sex “marriages” being legally recognized. He also suggested the “marriage” was more for Coyle’s benefit than his own.

“I have had the whole marriage thing — and been very happy — but James hasn’t, so I see it as a validation of my love for him,” he told the Daily Mail.

Ivar and Penny have attributed a sense of liberation and fulfillment to Ivar embracing his homosexual attraction and undertaking a relationship with Coyle, but Mountbatten’s own past comments also hint at unrest.

“Being completely truthful, it doesn’t sit comfortably with me that I’m going out with a man,” he revealed in June. “It's brilliant but I suppose in an ideal world I would prefer to have a wife because that has always been the norm.”

Penny asked whether he would “have changed your sexuality” during their marriage. “Certainly, without doubt, most gay blokes my age would prefer to be heterosexual,” he agreed.

The British royal family has a tradition of public neutrality on divisive political subjects, but embracing homosexuality appears to be an exception.

Queen Elizabeth has endorsed LGBT “rights” in the past, as have the recently-married Prince Harry and Meghan Markle. In July, controversy erupted when reports surfaced of Markle, previously a vocal left-wing actress, endorsing Ireland’s legalization of abortion at a private event.