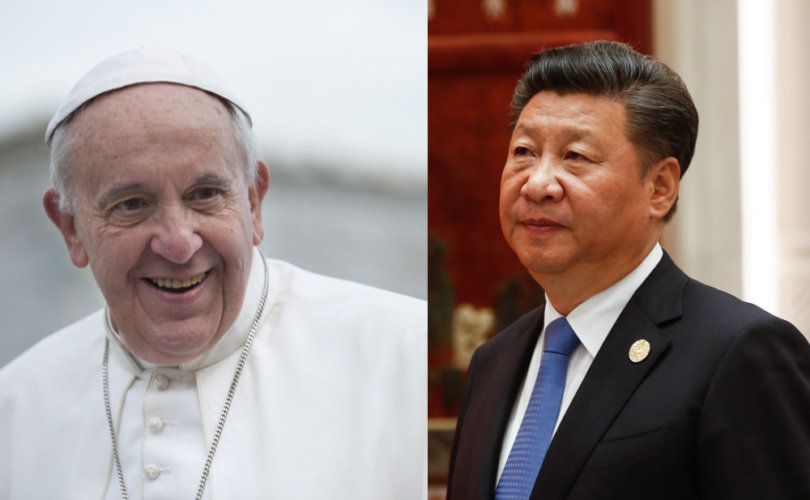 (LifeSiteNews) – A recent reappointment of two members of the Vatican’s diplomatic corps away from China has prompted speculation about Beijing’s influence over Vatican affairs, with the secretive Vatican-China deal due for renewal later this year.

On January 31, Monsignor Arnaldo Catalan, a native of the Philippines and the Vatican’s highest ranking official in Taiwan (Republic of China), was moved to become the Apostolic Nuncio in Rwanda. In 1971, when the U.N. recognized representatives of the Republic of China as the only representatives of China itself, the Vatican downgraded its Taiwan Nunciature, and has since maintained just a chargés d’affaires in the country. As such, Catalan was a key figure in Vatican relations with Taiwan and China.

Then on February 5, Monsignor Javier Herrera Corona was removed as head of the Holy See Study Mission in Hong Kong and appointed as Nuncio in the Republic of the Congo and in Gabon.

With no nunciature in China itself, Catalan and Corona were the Vatican’s leading diplomats in Asia who would have had dealings with Beijing.

Given that the two prelates were reassigned within days of each other, the move has prompted some to raise concerns about potential influence wielded by China over the Vatican’s diplomatic assignments, as well as concerns that the Vatican could be looking to strengthen ties with China. For the Vatican to do so formally, it would necessarily have to cut ties with Taiwan, as China does not recognize Taiwan as an independent nation but simply a breakaway province.

Deeply troubling news. Buried in Vatican announcements is the information that, within one week, the Vatican has pulled its reps out of both #HongKong & #Taiwan

Is @Pontifex on the brink of establishing diplomatic relations with #CCP?https://t.co/r7UKdKAC9n

“Deeply troubling news,” Rogers wrote. “It would be totally unacceptable and outrageous if that was so. Catholics must speak out with one voice around the world to stop this. The Church must #StandWithHongKong #StandWithTaiwan. I urge @Pontifex to appoint new representatives to #HongKong and #Taiwan urgently.”

It would be totally unacceptable and outrageous if that was so.

Catholics must speak out with one voice around the world to stop this.

“The thing that’s concerning about these articles is that typically when Beijing is intending to implement a new campaign or a new initiative against any particular group, very often the first step they take is to sort of trail it in the pro-Beijing media,” he said.

Despite Rogers’ concerns, Vatican officials downplayed any talk of potential close diplomatic ties with Beijing, with “a source familiar with papal diplomacy” telling CNA that any upcoming formal relations were “rather unlikely.”

The reassigning of both Catalan and Herrera Corona was excused as “unfortunate, but not part of any kind of plot or plan,” and the two prelates were described as having “been running for a promotion for some time.”

Writing in UCA News on February 12, Rogers expanded on what he termed his “warning of shifting sands in the Vatican-China relationship and challenges to religious freedoms in Hong Kong.”

He revealed that Herrera Corona had also “dismissed the fears about possible plans by the Vatican to establish diplomatic ties as mere speculation,” but appealed to the Vatican for “more reassurance.”

I want to hear from the Secretary of State Cardinal Pietro Parolin and the Secretary for Relations with States, my friend Archbishop Paul Gallagher, the following promises: that the Vatican will not form diplomatic relations with the Chinese Communist Party regime while it commits genocide against Uyghurs, continues the repression in Tibet, pursues persecution of Christians, commits crimes against humanity in terms of forced organ harvesting, perpetuates the persecution of Falun Gong or continues its repression of lawyers, dissidents and others in civil society and its severe repression in Hong Kong.

Rogers also alluded to the Vatican’s secret deal with China, questioning why neither Pope Francis nor the Vatican had “formally raised the plight of detained Catholic bishops and priests, and made this a condition of the continuation of any deal?”

The secret deal is due for renewal this fall, after it was first signed in 2018 and later renewed in 2020. Announcing the deal’s renewal in 2020, Cardinal Parolin declared that “we are content. There are still many other problems but we never expected the accord to resolve all the problems.”

Despite Pope Francis’ personal defense of the deal, religious persecution significantly increased since it was signed, which the U.S. Congressional-Executive Commission on China described as a direct consequence of the deal.

The abduction of clergy who refuse to join the state-approved Church in China has become a regular occurrence, with Bishop Peter Shao Zhumin having been arrested seven times in two years, and Bishop Joseph Zhang Weizhu still missing after being arrested last summer.

Rogers raised these arrests in his open appeal to Pope Francis, asking “in particular the plight of Bishop James Su Zhimin. Where is he? Why won’t the Pope enquire?”

“It’s a “betrayal of the real Church,” Cardinal Zen lamented in 2020 before revealing a startling detail: “It’s not an isolated episode. It’s already a long-standing policy of the Vatican not to offend the Chinese government.”