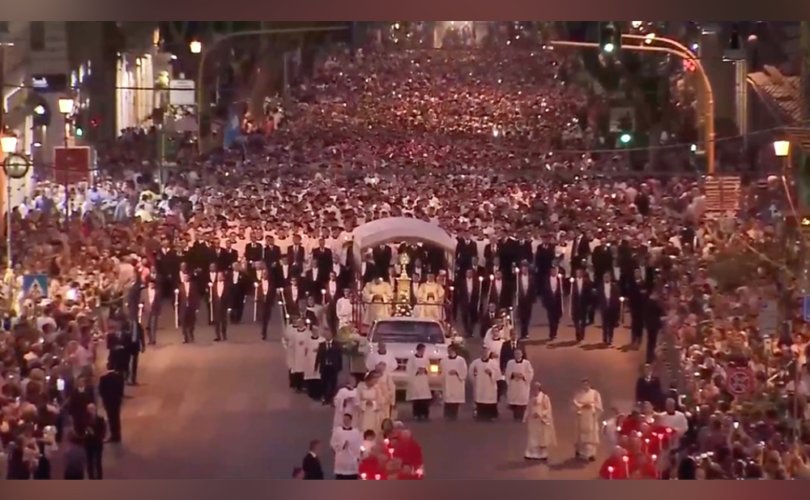 ROME, May 30, 2018 (LifeSiteNews) — Pope Francis is departing from a 40-year tradition restored by St. John Paul II and moving the celebration of Corpus Christi from the heart of Rome to the neighboring seaside town of Ostia.

The move marks the latest in several changes Pope Francis has made to the celebration of Corpus Christi since his pontificate began.

Given the deep significance and beauty of the annual Eucharastic procession in Rome, the move is leading some to ask: Franciscus, quo vadis?

Until this year, the annual candlelit Eucharistic procession immediately followed the celebration of Holy Mass at Rome’s Basilica of St. John Lateran — the See of the Bishop of Rome — and proceeded along the Via Merulana to the Basilica of St. Mary Major, where it concluded with solemn Benediction of the Most Blessed Sacrament.

Pope St. John Paul II restored the Corpus Christi procession to the streets of Rome in 1982, a traditoin that had not taken place for more than a hundred years. It was a custom that he deeply loved and continued throughout his pontificate, and one which Pope Benedict XVI also treasured.

An American priest who was a seminarian in Rome at the beginning of Pope John Paul II’s pontificate recalls his experience serving Mass for him on Corpus Christi in 1980:

I will never forget that Mass. Before it began, three other seminarians and I were with Pope John Paul in the sacristy of Saint Peter’s Basilica. The Holy Father spoke to us about the Holy Eucharist and the feast of Corpus Christi. He counseled us to make the Eucharist the center of our lives as seminarians and future priests. The Holy Father also spoke to us with apparent nostalgia about the tradition of Corpus Christi processions in Poland.

I watched Pope John Paul prepare for the Mass as he knelt down for silent prayer (several minutes) before putting on his vestments. We then proceeded into Saint Peter’s Square for an outdoor Mass where tens of thousands of people were gathered. At the end of Mass, the Holy Father carried the monstrance with the Blessed Sacrament in a procession around Saint Peter’s Square.

When we returned to the sacristy, the Holy Father said that he would much prefer having the procession through the streets of Rome, like they did in Poland.

Two years later, in 1982, while still a seminarian in Rome but now ordained a deacon, he again served Mass for John Paul II on the feast of Corpus Christi, but this time outside St. John Lateran. The priest recalled John Paul II carrying the Blessed Sacrament through the Roman streets and explained how, as a Cardinal, Koral Wojtyla had fought to restore the full Corpus Christi procession in Poland.

In Krakow (and I imagine throughout Poland), the popular Corpus Christi procession was banned during the Nazi occupation of Poland. Later, the Communists were determined to eradicate this tradition. Prior to the war, in Krakow this great public procession honoring the Eucharistic Body and Blood of Christ went from Wawel Cathedral through the streets of the Old Town to the market square. The communists permitted a truncated procession to leave Wawel Cathedral and process around the courtyard of the royal palace, but the procession was forbidden to enter the city. After numerous protests from the archdiocese, the restrictions were eased a bit so that the Corpus Christi procession was permitted, albeit along a shortened route in the city.

During these processions in the 1970’s, Cardinal Karol Wojtyla, the future John Paul II, preached dynamic sermons in which he spoke of the Eucharist and also about religious freedom and the right to worship. As is well known, the future pope struggled for the building of new churches in the archdiocese of Krakow. He also fought for the restoration of the full Corpus Christi procession.

We desire to raise the chalice of salvation, the chalice of the Eucharist, and to invoke publicly the name of the Lord before all men, before the entire city and the world.

Are not the words of the psalmist fulfilled in the presence of this city of Rome? “Precious in the eyes of the Lord is the death of his faithful ones” (Psalm 115:15).

Rome of the Apostles, Martyrs and Saints, pays honor to the Eucharist which has become for all the Bread of Life and the Blood of spiritual freedom: “Oh Lord, I am thy servant, the son of thy handmaid. Thou has loosed my bonds.” So speaks the psalmist … through penance and the Eucharist the path leads out of sin and slavery to the devil and the world — to the freedom of the Spirit.  Walking in the procession of the Most Holy Body and Blood of Christ, we desire to bear witness to this [truth] before Rome and the world. This is our liturgy of praise and thanksgiving, which we cannot neglect [to offer] before God and men.

A respected priest who has long served in Rome recalled for LifeSitenews his experience of taking part in the Corpus Christi procession with Pope John Paul II during the Jubilee Year of 2000.

“I remember processing down the via Merulana. There must have been 80,000 people there. The street descends and reascends before reaching the Basilica of St. Mary Major. I remember walking up the incline and looking back. The streets were absolutely packed. I saw a sea of clergy, seminarians, religious and laity processing with the Pope and the Blessed Sacrament. It was extraordinary,” he said.

Breaking one tradition to return to another?

Details regarding Pope Francis’ decision to move the procession from the heart of Rome to the seaside town of Ostia were released on Tuesday, May 29, with the Vatican’s announcement of the Pope’s liturgical schedule for the months of June-August.

According to the calendar, Pope Francis will celebrate Holy Mass for the Solemnity of the Most Holy Body and Blood of Christ in the square outside the Church of St. Monica in Ostia on Sunday, June 3, at 6:00pm.

At the conclusion of the Mass, a Eucharistic procession will make its way to a parking lot near the Church of Our Lady of Bonaria just over a mile away. The celebration will end with Eucharistic Benediction.

In a follow-up statement yesterday, the Vicariate of Rome acknowledged that Pope Francis’ decision marks a departure from the 40-year tradition of celebrating Corpus Christi at the fourth century basilica of St. John Lateran in Rome.

“One tradition is being broken but another is being taken up again,” His Excellency Paolo Lojudice, the local auxiliary bishop in Ostia, said in the statement.

Lojudice explained that Pope Francis’ move is a return to Paul VI’s practice of celebrating Corpus Domini in various areas of the city. He also noted that Paul VI celebrated the solemnity in Ostia exactly 50 years ago, in 1968 — the same year he issued Humanae Vitae.

“I believe that [the change] is in keeping with the pastoral logic of Pope Francis, of his ‘magisterium of signs’ that wants to take the Church out into the streets, to the peripheries, close to the most delicate environments and situations,” he said.

Bishop Lojudice described this Sunday’s celebration of Corpus Christi in Ostia as a “beautiful opportunity” for the whole area. “It is not a parish visit, but a visit to the whole community,” he said. He also noted that around 850 first communicants, 150 children who belong to the local oratories, and 350 children who received the Sacrament of Confirmation will take part in the celebration.

In preparation for Corpus Christi, the eight parishes in Ostia will organize a prayer vigil on Wednesday, May 30, at 9:00 pm at a local beach, the statement said.

In a further departure from past Corpus Christi celebrations, the statement also specified that only the Pope’s vicar for the diocese of Rome, cardinal-designate Archbishop Angelo De Donatis, and the auxiliary bishops and parish priests of Ostia will be concelebrating the Mass.

“There is no concelebration for other priests,” the statement said.

Under the pontificates of John Paul II and Benedict XVI, priests working in the Vatican or studying in Rome would come out in large numbers on the solemnity of Corpus Christi to concelebrate Holy Mass with the Pope and to process with the Most Blessed Sacrament to the Basilica of St. Mary Major for Eucharistic Benediction.

In recent years, however, the number of priests and faithful attending the Mass in Rome has dramatically declined.

Some observers support Pope Francis’ decision to move the annual Corpus Christi celebration to the peripheries, in the hope that it will help to increase Eucharistic devotion.

Critics, however, pointing to declining attendance under the current pontificate, suggest the move might be a way of solving dwindling numbers that don’t play well with the Francis media narrative.

In the first year of his pontificate, Pope Francis surprised everyone by following the Corpus Christi procession on foot, behind the Most Blessed Sacrament, instead of kneeling before the Eucharist on a modified “pope-mobile,” as Popes John Paul II and Benedict XVI had done. Then, in 2014, reportedly no longer able to make the journey on foot, the pope chose to travel to the Basilica of St. Mary Major by car, ahead of the arrival of the Lord in the Blessed Sacrament.

Last year, he took the further and unprecedented step of transferring the Vatican’s liturgical celebration of Corpus Christi from Thursday to the following Sunday.

Although numerous bishops’ conferences (including in Italy and the United States) have transferred Corpus Christi to Sunday to accommodate the faithful, the Vatican had kept the traditional liturgical observance of Corpus Christi, celebrating this solemn feast on the Thursday after Trinity Sunday.

At the time, Italian media reported that Pope Francis transferred the feast because he thought a greater number of faithful, pilgrims and tourists would participate in the Eucharistic procession in Rome if Corpus Christi were celebrated on a Sunday.

In August 1264, Pope Urban IV instituted the Solemnity of Corpus Christi on the Thursday after Pentecost as a feast for the entire Latin Church, by the papal bull Transiturus de hoc mundo.

St. Thomas Aquinas contributed substantially to the bull, particularly regarding the liturgical texts for the new feast. Aquinas composed the sequence Tantum ergo for the feast.

On the solemnity of Corpus Christi, the Pope would accompany the Blessed Sacrament in procession from St. Peter’s through the streets of the surrounding quarters of Rome.

Yet the procession was periodically interrupted over the next seven centuries due to invasion, Roman occupation and political turbulence on the peninsula.

In 1929, with the signing of the Lateran Pact, and the establishment of an international agreement between Italy and the Holy See, Corpus Christi was acknowledged by the Italian State as a public holiday, and the procession was restored, although in a limited fashion. Pope Pius XI, who was pope at the time, led the Corpus Christi procession but confined it to St. Peter’s Square.

In 1964, on the 700th anniversary of the institution of Corpus Christi, Paul VI led the procession from St. Peter’s Basilica. In the years that followed, however, he held the celebrations on the outskirts of Rome, such as Ostia in 1968, until Pope John Paul II restored the Eucharistic procession to the heart and streets of Rome.