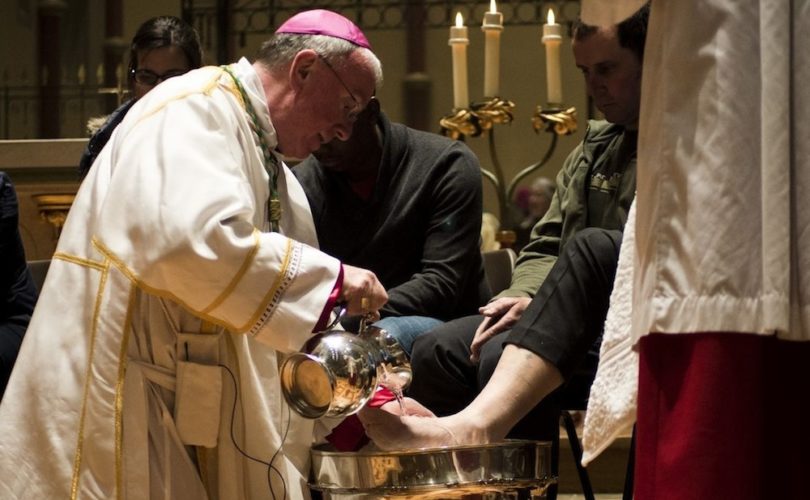 Expectations for a change in Catholic teaching on fundamental issues of the nature of marriage and the family are growing around the Vatican’s upcoming Extraordinary Synod of Bishops, and one British bishop has firmly laid the blame for the uproar at the feet of “progressively-minded Catholics.”

“It is no secret that many progressively-minded Catholics are expecting fundamental changes in doctrine and discipline” from the Synod, Bishop Philip Egan of Portsmouth said at a conference last week. “Pope Francis’s desire to have a ‘frank, open and civilised discussion,’ his emphasis on mercy and the desire to show pastoral care of those on the margins has given further traction to this,” he added.

Bishop Egan, known among the British Catholic hierarchy for his outspoken defense of Catholic moral and social teaching, told the annual conference of the Society for the Protection of Unborn Children (SPUC) that a radical departure or about-face from the Church’s teachings is impossible.

Doctrine, he said, “develops” but never alters: “The truth is one and doctrine forms an integral whole,” meaning that “authentic developments in doctrine or discipline must be logically consistent.”

The much talked-about desire for the Synod to “find a pastoral solution for the divorced and remarried” could include changes to the canonical legal process to declare a marriage “annulled,” he said, but Catholics should not look for quick solutions. “It may take a long time before the theological debate proposes a solution that conserves the Tradition yet develops it authentically to meet the new needs arising.”

Bishop Egan said also that, unlike an Ecumenical Council, a Synod is not “deliberative but an advisory body” that does not have the power to decide matters of doctrine for the whole Church. Although the secular media has mainly focused on the crisis surrounding the admittance of civilly remarried divorcees to Communion, Egan said the pope called the Synod because he believes that “what is at issue is the Christian vision of the family.”

“Because the problems of sexuality, marriage and family-life are today so deep and so complex, the topic needs two Synods to give it more adequate treatment.”

Apart from this specific problem that is catching headlines, Bishop Egan said that the world faces a more fundamental crisis of a changing anthropology, “that is, the Christian understanding of what it means to be a human being, created, fallen yet redeemed.”

“In Britain the crisis in family life is intrinsically bound up with the crisis of faith, since religion and spirituality are the deepest aspects of the human person, forming a dynamic infrastructure that underpins a family and its mores,” he explained.

Observers have noted that religious adherence in Britain had been declining steadily up to the start of the 20th century, but reached a “catastrophic collapse” in 1970s, “after the ‘60s with their far-reaching cultural, social and sexual revolutions,” the bishop said.

The “swinging sixties” brought in a broad attack on the traditional understanding of the role of men and women, changes were felt throughout society because “women generally uphold religious traditions and moral values,” he continued. These included a new emphasis on “youth culture,” the contraceptive pill, what was then called the “women’s liberation movement,” the legalization of abortion and homosexuality and the loosening of legal restrictions on divorce.

But of all these changes, the bishop said, the “eclipse of Christian faith and demise of the traditional family” was particularly the result of the growth of secularism, a philosophy, rival to Christianity, that seeks to establish a “code of behaviour formed explicitly without the ‘sacred canopy’ of religion.”

“Secularism separates Church and State; it seeks to drive religion out of public and political debate and to treat it as private spirituality. It ‘ring-fences’ religion and dissolves the foundations of ethics, thus depriving society of its moral compass,” he said.

“The result is moral relativism: my truth is not your truth, and yours not mine. Nothing is solid.” From this grows the “alternative anthropologies” that have given rise not only to the new “gender ideologies” and the homosexualist political movement, but to “divergent accounts” of  “the dignity and value of human life, the embryo and the unborn child, the nature of sexuality and the family, and the care of the terminally ill.”

The working documents prepared for the Synod, called the Instrumentum Laboris, “candidly acknowledges that many of the faithful and even many clergy have not taken on board the Church’s vision. This malaise stems in part from a lack of faith and sound catechesis, but also from the corrosive pressures of contemporary culture that often oppose the Gospel,” Egan said.

In addition, the document “suggested that a new theological study of homosexuality in dialogue with the human sciences is needed and as well as a study of the theological meaning of being male and being female.”

He warned against the suggestion, made by many, including high-ranking clerics, that the Church’s doctrine is open to change according to “majority opinion” in today’s “highly secularised” societies led by the secular media and cultural relativism.

“Is it surprising that many ordinary Christians find themselves going with the flow, rather than being counter-cultural? It is easy to lose the way, to take the easy option, to be persuaded by what the majority think rather than by the Bible and the Church’s Tradition and teaching.”

He added that in the early centuries of the Church, during the controversies over Arianism and the definition of the Christological doctrines, the orthodox position adopted by the Church “was not a via media or middle-ground between two extremes. It was in fact one of the extremes, held by a minority.”