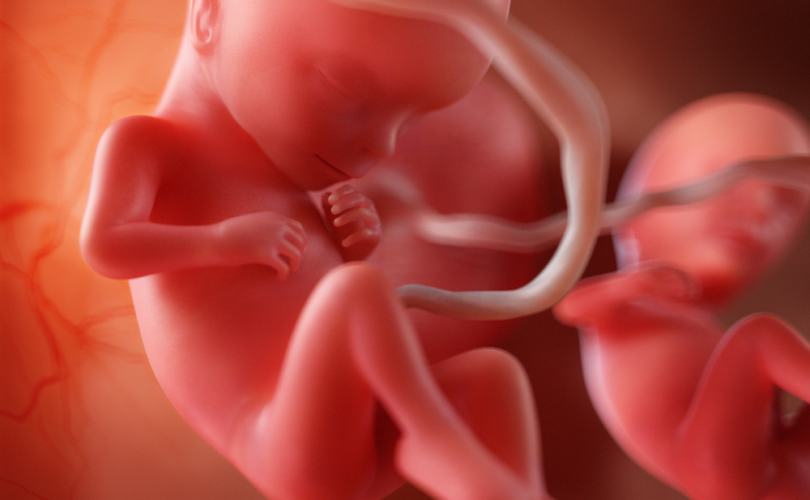 An illustration of a baby at 14 weeks' gestationShutterstock

WASHINGTON D.C. (LifeSiteNews) – The U.S. Senate has defeated a bill which sought to enshrine abortion-on-demand until birth into federal law.

The Women’s Health Protection Act was defeated in the Democrat-dominated Senate in a cloture vote of 48-46 on Monday February 28. Forty-seven Senate Republicans were joined by Democrat Sen. Joe Manchin (D-W.Va) in voting against the Act, which would have needed 60 votes in order to overcome a filibuster.

The Act had previously narrowly received the approval of the House in September last year, in a vote of 218-211. Joe Biden has also signalled his personal support for the Act, committing to codify Roe v. Wade in his pre-election manifesto.

The misnomered “Women’s Health Protection Act” was born out of Democrats’ fears that the Supreme Court might eventually rule to overturn Roe v. Wade as a result of the Dobbs v. Jackson Women’s Health Organization. If the WHPA had been passed, it would have effectively rendered any Supreme Court ruling against abortion moot, as abortion up to birth, for any reason, would be thus enshrined in federal law.

The bill, which has been repeatedly introduced over the years without success, would establish a federal statutory right to perform and obtain abortions, including after fetal viability (under the broad cover of “health”), and specifically forbids states from subjecting abortion to ultrasound requirements (even though these are standard to discern fetal age), mandatory waiting periods, informed-consent requirements, and other health and safety regulations, such as admitting privileges.

There’s a lot going on in the world right now, and here at home, Senate Democrats are voting on a bill that would declare unlimited abortion a fundamental right and nullify pro-life state laws across the country. Total extremism, pitched as a total necessity.

During the debate Monday, Senator Steve Daines (R-MT), decried the Act as “extreme,” and “is completely contrary to the kind of nation America is, and aspires to be.”

“It’s an egregious violation of the most fundamental of all human rights, and that is the right to life,” he said.

“In a nutshell, this radical bill would make the United States of America one of the most dangerous places in the world to be an unborn child,” Daines added. Instead of following science, “the ‘Abortion on Demand Until Birth Act’ ignores the science entirely—and would erase unborn children and even the most modest protections for their right to life from the laws of every state.”

The Democrats’ “Abortion on Demand Until Birth Act” would impose a horrifying abortion regime across the country that violates the right to life and is completely contrary to the kind of nation America is and aspires to be. pic.twitter.com/VlSMGxE14D

Daines – the founder and chair of the Senate Pro-Life Caucus – was joined by James Lankford, chair of the Values Action Team, for a press conference before the vote, in which they also criticized Democrat Senators for holding the vote during Russia’s invasion of Ukraine.

Prior to the vote, Lila Rose, the president and founder of Live Action, warned that the Act “would be the single most destructive piece of legislation enacted in the history of our nation. Every abortion ends the life of an innocent human being, a child with intrinsic value; the only difference between them and us is their youth.”

Michael Warsaw, CEO of EWTN Global Catholic Network, and the publisher of the National Catholic Register, echoed Rose before the vote, describing the Act as “the most extreme piece of abortion legislation to ever receive a vote in the U.S. Senate.”

Following the vote, Rose took to Twitter to praise the Senators who stopped the passage of a bill that would force “the most extreme abortion regime in the world upon America.”

“Biden, Pelosi and Schumer’s ‘Abortion on Demand Until Birth Act’ would enshrine an unlimited abortion ‘right’ in federal law and block common ground pro-life laws around the country, including limits on late-term abortions when unborn babies feel pain, bans on lethal discrimination abortions, and many more. In calling for this bill to be passed, Chuck Schumer referred to abortion as a ‘sacred’ and ‘fundamental right’ – proving that pro-abortion Democrats could not be more radically out of touch with the American people. Those who sided with the abortion lobby to trample the will of the people will face political consequences.”