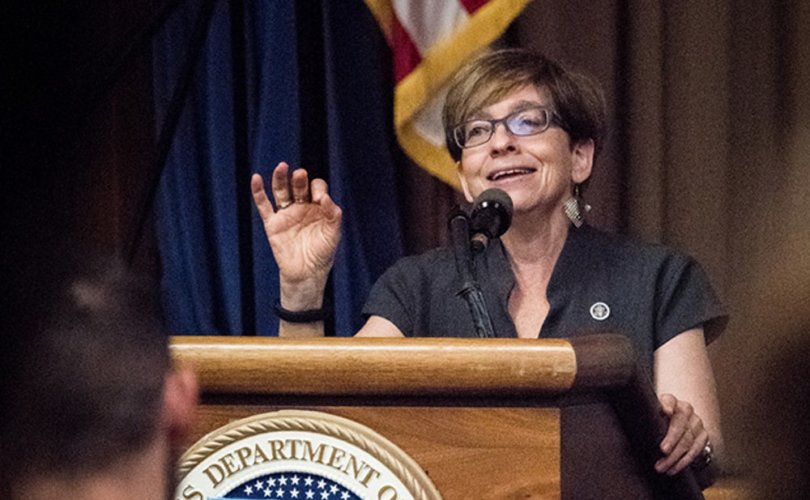 Social conservatives have objected to Feldblum since her appointment by former President Barack Obama, and his successor Donald Trump surprised and angered social conservatives last year when he renominated her. Lee was at the forefront of the opposition, citing the former ACLU attorney and open lesbian’s history on LGBT issues.

He pointed to her past comments that she is “not sure marriage is a normatively good institution” and that society must “acknowledge the wide array of non-marital social structures,” warning Americans to not “think for a second that Feldblum’s derogatory views about marriage will stay private” as a regulator.

“Feldblum has described modern-day politics as a ‘zero-sum game,’ where rights for LGBT Americans are secured only by curtailing the rights of religious Americans,” Lee argued, quoting her opposition to “individual exceptions based on religious” convictions on the grounds that homosexual “rights” cannot be “adequately advanced if pockets of resistance … are permitted to flourish.”

Feldblum was a signatory of the 2006 “Beyond Marriage” declaration, which endorsed “committed, loving households in which there is more than one conjugal partner” and “queer couples who decide to jointly create and raise a child with another queer person or couple,” among other arrangements (she distanced herself from the document in 2009). She also contends that “sex discrimination covers discrimination based on sexual orientation and gender identity,” and used her position to sway the EEOC in favor of transgender bathrooms.

Last month, Lee objected to the Senate approving Feldblum by unanimous consent, raising the possibility of an extended confirmation process that could have delayed the EEOC’s convening on schedule in 2019. Feldblum responded with two Medium posts in which she denied having ever said “Gays win; Christians lose” and claimed to recognize “some situations in which the rights of religious liberty for organizations who believe homosexuality is sinful will conflict with and should prevail over the rights of LGBT people.”

Feldblum told the Blade she believes there were at least 60 votes in the Senate that would have confirmed her if the vote had been allowed to take place. “Today at noon my commission on the EEOC expires. What a wonderful almost nine-year run I have had!” she announced on Facebook January 3. “Now is the time to fight even harder for diversity, safety, and equity.”

Pro-homosexual activists are incensed at the outcome, with LGBTQ Victory Institute senior communications director Elliot Imse flatly telling the Blade, “Mike Lee is a bigot, period, and his actions must be condemned by all members of Congress who believe LGBTQ Americans have the right to work free of discrimination.” But social conservatives welcome the news.

Great news: #LGBTQ activist @chaifeldblum out at #EEOC. Thank you, @SenMikeLee, for defending real liberty and religious freedom against the Left: https://t.co/EzF1gL7Uw0

“It’s not the job of the EEOC to fight for abstractions like ‘diversity, safety, and equity.’ The EEOC’s job is to enforce federal employment discrimination law,” PowerLine’s Paul Mirengoff said. “Non-discrimination will produce greater diversity, safety, equity in some cases, but these aren’t the touchstones of federal law. The touchstones are the words of the relevant statutes.”

Mirengoff went on to explain that the EEOC now lacks a quorum that will most likely prevent it from undertaking new actions, which will require the Trump administration to put forth a trio of new nominees (at least one of which must be selected by the Senate’s Democrat minority).

That nominee “will likely be roughly as radical as Feldblum, but without the paper trail,” Mirengoff predicted, though he or she will also be “far less effective for radicalism” because he or she “almost certainly won’t have anything approaching Feldblum’s knowledge of how the EEOC works and how to get one’s way there […] That’s one reason why blocking Feldblum was worthwhile.”