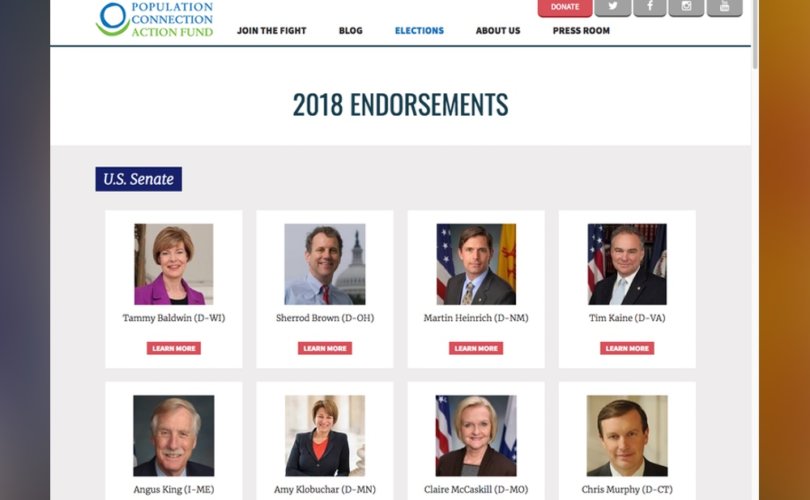 August 29, 2018 (LifeSiteNews) – Over a dozen Democrat House candidates campaigning for election this fall are doing so with the public endorsements and financial backing of a population control group that wants to punish families for having more than two children.

The Washington Examiner’s Phillip Wegmann reports that Population Connection Action Fund (PCAF), has endorsed Randy Bryce in Wisconsin, Scott Wallace in Pennsylvania, Abigail Spanberger in Virginia, Lauren Baer in Florida, and many others (list available here). LifeSiteNews reported in July that Wallace has donated heavily to PCAF and other population control groups through his family’s pro-abortion non-profit.

Specifically, the group advocates funding for elective abortions and contraception abroad, through both U.S. foreign aid and support for the United Nations Population Fund (UNFPA), which President Donald Trump withdrew last year over its participation in China’s forced abortion regime.

Under its former name, ZPG once declared that families guilty of “irresponsible breeding,” which it defined as having more than two kids, should be “taxed to the hilt.”

Pro-lifers and other overpopulation skeptics have noted that multiple predictions throughout history that population growth would cause mass starvation have failed to come true. Even the Chinese government, which for decades practiced forced abortion and sterilization, now fears its current birth rates are too low to sustain its economy and support its retirees.

PCAF “tried to clean up its image since the 1970s,” Wegmann writes, observing that it “mostly hands out condoms on college campuses and posts memes about affordable birth control these days,” rather than operating sterilization clinics as it once did. But despite the group’s more mainstream public image, he concluded that it remains “founded on the premise that the world would be better off with fewer people.”