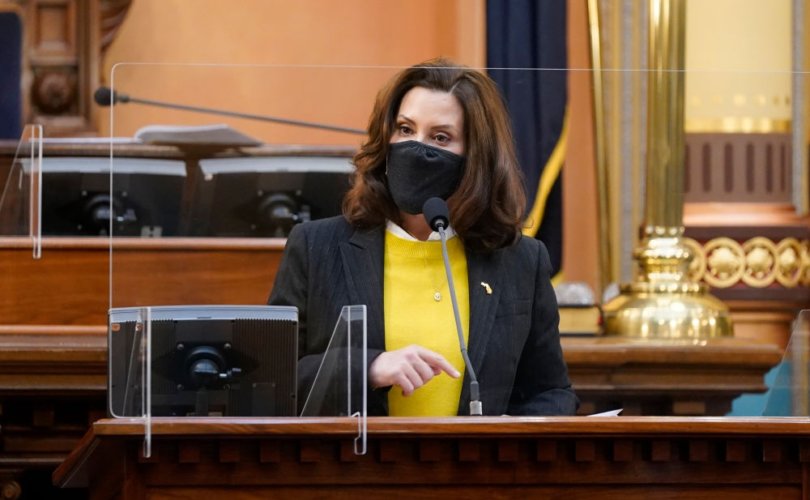 LANSING, Michigan (LifeSiteNews) — The radically pro-abortion Democratic governor of Michigan is set to use her line-item veto power to eliminate more than $20 million in funding from the state’s budget bill over “anti-choice” concerns. Items slated to be eliminated from the bill would have supported adoptive parents and promoted adoption as an alternative to abortion.

Gov. Gretchen Whitmer, who has referred to abortion access as “a great part of [Michigan’s] legacy,” will veto budget items in House Bill 5783 that would have allocated $2 million in tax credits for adoptive parents and put up $10 million to promote adoption as an alternative to abortion, the Detroit Free Press reported.

“Other expenses on the chopping block include $4 million for maternity homes expansion; $3 million for a maternal navigator pilot program; $700,000 for the Real Alternatives pregnancy program, which promotes ‘childbirth, alternatives to abortion, and grief counseling,'” The Washington Times noted.
RELATED: Gov. Whitmer says the ability to kill unborn babies is ‘a great part of our legacy’ in Michigan

The Detroit Free Press noted that most of Whitmer’s vetoes “relate to the Department of Health and Human Services and involve restrictions on the use of state funds to pay for abortions or funding for pregnancy and parenting centers that promote alternatives to abortion.”

Another item set to be axed by the leftist governor was a $100,000 legal fund in the state’s Department of Corrections that would have been used to block the use of taxpayer dollars to fund transgender surgeries or therapies in state prisons.

Many pro-abortion advocates have characterized the pro-life centers — which offer pregnant women practical assistance like baby food and supplies, along with counseling and guidance regarding adoption — as “deceptive” organizations that “torture” women by providing them with life-affirming options instead of simply killing their unborn babies.

Pro-abortion Dems like gov Whitmer show their true extremism in ‘cracking down’ on pregnancy centers, which provide a multitude of resources for women and families that the profit-driven abortion industry just doesn’t offer https://t.co/HMdd7ztkYB

“The governor claims to be a voice for ‘choice,’ but her actions clearly support only one option for women in a crisis pregnancy — the deadly choice of abortion,” Albert said, according to the Detroit Free Press.

Albert said the leftist governor’s vetoes suggest that “helping pregnant women who might consider adoption instead is now a bridge too far,” and slammed the governor’s line-item vetoes which he said will strip away assistance for “expecting mothers and their babies, including those facing a crisis pregnancy, by denying them access to essential care both before and after giving birth.”