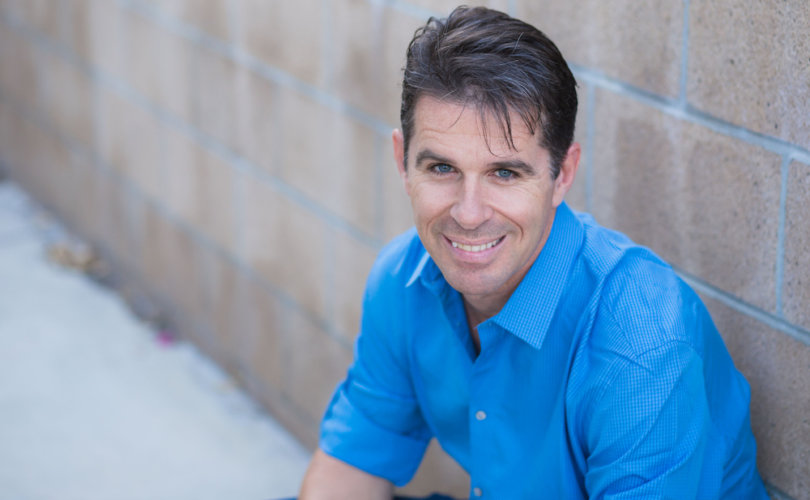 SAN DIEGO, California, November 30, 2016 (LifeSiteNews) – For the last seven-plus years, he was host for the top-rated Catholic Answers Live apologetics radio program, and now Patrick Coffin is going solo to bring a “badly needed platform of hope” to the culture.

The Patrick Coffin Show, Coffin’s new podcast-centered media venture in Catholic apologetics and evangelization, available via his website, iTunes and his own YouTube channel, will “till the soil” of society, in effect working to fix the culture by first rescuing the individual.

“There are people all around us who don't know God loves them and has a plan for their life,” Coffin tells LifeSiteNews. “They're our mission field.”

“Hopefully, what's being built at patrickcoffin.media is a step in that direction by inviting people to do what they can to restore the person in the mirror,” he says. “In the end, the “macro-cultural” is the “micro-personal.”

Coffin, a husband and father of two with one child in Heaven, admits to being obsessed with culture and how to build a better one from its current fast decline.

Coffin believes that it doesn’t have to be that way, so much so that he walked away from a regular paycheck and a job he enjoyed to try his hand at building upon what he did with Catholic Answers Live to save souls, only now with more pressing daily commentary, also offering hope infused with some humor.

“Through commentary and rants that are informed by Christian faith, a lot can be done to provide a sense of hope to people,” he tells LifeSiteNews, “and even relief from the non-stop cynicism and negativity that characterizes so much of Canadian and American media coverage.”

Who’s he talking to?

The Patrick Coffin Show features interviews with what Coffin calls “A-list social influencers, those with a proven track record helping people break down self-imposed barriers to living the life they truly want.”

Among the areas where he plans to focus are divorce-proofing your marriage; new strategies for pornography addiction, alcoholism, and depression; how to make better use of your time; intentional leadership; the importance of a written family budget and memory recall improvement, along with commentary joining culture, faith and the political mediascape.

For the time being, Coffin is the sole provider of content, but he plans to work into having contributors in the future.

A cradle Catholic from Halifax, Nova Scotia, Coffin, like many others, fell away from the faith while in college.

“My Catholic faith was slowly corroded and undermined by neo-modernist spin and I ended up a callow agnostic,” he recalls. “God knows where I'd be without the intercession of Venerable Fulton Sheen and the love of God.”

He later returned to the Church, taught high school, graduated from master’s programs at McGill University and Franciscan University of Steubenville, worked in Hollywood in creative development, and eventually auditioned for the Catholic Answers Live host job at the flagship radio show of the San Diego-based apostolate Catholic Answers.

He told LifeSiteNews that it’s hard to parse out the intersection of his work in Catholic broadcasting and development of his own faith life.

“My desire to evangelize fed my love of media,” Coffin says. “In a way, they are forms of each other.”

His years in apologetics and interviewing prominent cultural and religious figures have also provided for the contents of his new eBook titled Stay Cool When the Argument Heats Up.

While The Patrick Coffin Show features Catholic apologetics, Coffin also looks to reach non-Catholics, “literate Christians of all stripes,” as well with his new media platform.

“Catholic media is invaluable for ongoing formation,” he tells LifeSiteNews. “But there are other ways of reaching people outside the Catholic media sphere. And, God willing, this new media platform is an effective one of them.”

His plan is to create content that “hits nerves and becomes a natural pick for sharing,” he says, as “there's no other way to have something go viral.”

“The Internet as a mission field is glutted with many thousands of self-styled Walter Cronkites,” Coffin muses. “They key is to stand out with content that is prophetic without being pompous, assertive without being angry.”

He states further about his evangelization goal, “The person I'm really addressing already has a relationship with God and the Church to some extent but who is also struggling with marital conflicts, the usual money issues, and matters related to keeping their kids Catholic.”

“That core, or center of the bull's eye, so to speak,” he says, “can then share my commentaries and interviews with like-minded folks who may be away from Christ but who is also hungry for content that has meaning and provides context, and a little comedy never hurt anyone.”

It starts with the family

Following the analogy of tilling the garden, Coffin says the soil must be good soil to produce good fruit, and so the culture’s ills must be first addressed both literally and figuratively at home.

“So when we talk about laws, the courts, politicians, the definition of marriage, the scourge of pornography, the evil of abortion, and so on,” he points out, “these are downstream, so to speak, from the kind of human person we are producing.”

“Which means we must focus on the personal and the familial since politicians and prelates — and everyone else — have their origins within a family, for good or for ill.”

Coffin says he’s not opposed to a good argument over policy, law, or the ethics of any particular social problem, “but that's not going to be my main sweet spot. I want to pick the brains of both sages of the Judeo-Christian culture and the survivors of the attacks by enemies of that culture.”

And while evangelization and apologetics are the show’s foundation and purpose, Coffin does not intend to be the proverbial hammer over the listener or viewer’s head.

“I love apologetics and I am a Bible nerd,” he explains, “but not all artists who are Christian have to paint pictures of Jesus only. My listeners and viewers will figure out that I'm a practicing Catholic, but on-the-nose evangelization is not what this is about.”

Coffin doesn’t mind calling things what they are, though, in the service of evangelizing others.

“Political correctness is also killing us in the west,” he says. “There is a level of toxicity and despair now that was not present in the years of my formation.”

For instance, he continues, “the default media setting is that law enforcement is now automatically assumed to be the perpetrator and criminals the victims, and the legal foundations of Canada and the U.S., which are inherently Judeo-Christian with classic deism, have been hacked at for two generations.”

And, he firmly states, “It's time to restore what's been lost.”

There is the question of how to employ levity in matters that might be either spiritual or serious in nature, though Coffin sees no conflict.

“The humor element is not a panacea, and some things just aren't funny,” he says. “But when you're on the winning side, as serious Christians are, your ‘context horizon’ widens up to include more than this life. Which, if you think about it, takes the pressure off!”

It appears out of the gate that there is enthusiasm for Coffin’s apologetics and evangelization media venture. His 30-day Indiegogo crowd-funding campaign surpassed the initial goal ahead of time.

“Thanks to people's generous response, we blasted past our goal line a day and a half early,” Coffin says enthusiastically.

This means The Patrick Coffin Show qualified for Indiegogo’s In-Demand status, which he says is “huge” because it keeps the fundraising door open indefinitely.

Anyone who didn't know about about the campaign can still donate HERE.

Coffin is building a simple studio that includes a camera, lighting, sound, mixing and backdrop to film the podcasts, as well as a staff to bring the platform to market. The initial structure is a membership site with exclusive content.

“The more financial support,” Coffin says, “the more I can deliver,” also providing a longer runway for launching other elements including, he says, a myth-busting TV series called The Fact Is.

The work in front of you

In taking on the task of reaching people via his media venture, Coffin is sensible about what he can and can’t control, and what’s for him to address and not in the world of Catholic apologetics.

“What I can do is sweep my side of the street,” he says.

Even though “hope is missing in the tsunami of bad news today,” Coffin stands ready to fill that void in the way he knows best, telling his blog readers in the weeks before his last broadcast as host of Catholic Answers Live this past September, “The need is huge, urgent and long overdue.”