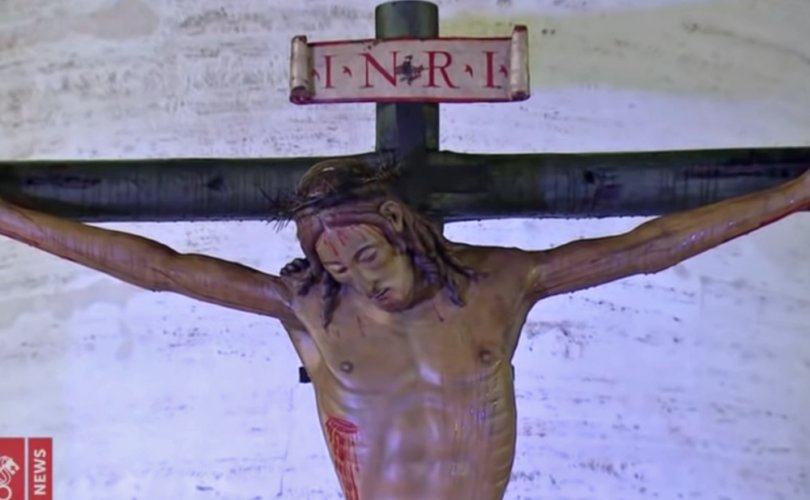 The famous Crucifix of the Church of San Marcello al Corso of Rome, believed by generations of Romans to be miraculous, was displayed outside St Peter’s Basilica for almost two hours last Friday without any protection from the elements.

Video of the Urbi et Orbi [to the city and the world] ceremony shows water droplets on the cross and water streaming down the corpus.

According to Italian newspaper Il Messaggero, the rain “swelled the dry wood.”

“The stucco was broken in several places, as were patches of the antique light paint in a few sections,” reported journalist Franca Giansoldati.

“In a few sections the tempera paint used by the anonymous artist to depict the blood from [the corpus’] side has loosened, the wooden surface of the hair has rippled and a few details of the arms are ruined.”

At one point during the service, Pope Francis went to the cross and kissed the feet of Jesus.

Giansoldati added that people are now wondering why nobody thought that the 14th century treasure would survive the downpour unscathed or to protect it in any way.  She pointed out that it could have been placed under the same canopy that protected Pope Francis. Meanwhile, a mere copy of a Byzantine icon of the Madonna was protected during the ceremony under thick glass.

The journalist reported that some people are blaming Pope Francis’ Master of Ceremonies for the damage.

“Malicious people are affirming that the decision to abandon the miraculous crucifix to the elements came from the head of liturgical ceremonies, Monsignor Guido Marini, so as to leave intact the essential choreography: the Pope alone before the illuminated canopy, on [St. Peter’s Square], without any other element.”

Whoever is to blame, she added, the questions now are what can be done to restore the artifact and how much this will cost.

But Giansoldi’s account is being challenged by the rector of San Marcello al Corso. According to Crux newspaper, Fr. Enrico Casini says that the “harm is not serious.” He told Crux that it was “possible” that the crucifix received “a little bit” of damage but he believes that “it’s something light that can be fixed in a short time.”

Casini confirmed that the artifact has been taken to the Vatican restorations labs but said that earlier reports about the damage were “not correct.”

At least two miracles are attributed to the Crucifix of San Marcello al Corso, the first being its own survival of a fire that otherwise completely destroyed a previous incarnation of the church in 1519.

Deemed by the Roman populace to be miraculous, the crucifix was carried throughout the city by a Spanish cardinal named Raimondo Vich in August 1522 to ward off a burgeoning plague. According to the Finestre Sull’ Arte (“Windows on Art”) online magazine, the procession lasted 18 days and ended when the Crucifix was brought into St. Peter’s Basilica. In the meantime the epidemic slowed down “and this event contributed to the reputation of the crucifix.” After that it was often carried in procession for holy years or other events.

Gregory Di Pippo, editor of the New Liturgical Movement online magazine, told LifeSiteNews that he thinks most people know “that it is not a good idea to leave an object made of dry wood and covered in plaster out in the rain.”

International attention turned towards the miraculous Crucifix in the Church of San Marcello al Corso in mid-March when Pope Francis walked through the empty streets of virus-struck Rome to visit it. He prayed before the carving for an end to the COVID-19 coronavirus pandemic.

During his homily at the Urbi et Orbi ceremony, the Pope returned to his theme of linking the coronavirus pandemic to a response from the planet to environmental pollution.

“In this world, that you love more than we do, we have gone ahead at breakneck speed, feeling powerful and able to do anything. Greedy for profit, we let ourselves get caught up in things, and lured away by haste. We did not stop at your reproach to us, we were not shaken awake by wars or injustice across the world, nor did we listen to the cry of the poor or of our ailing planet. We carried on regardless, thinking we would stay healthy in a world that was sick,” he said.

Pope Francis told a Spanish journalist last week that he believes that the coronavirus pandemic is nature “having a fit” in response to environmental pollution.