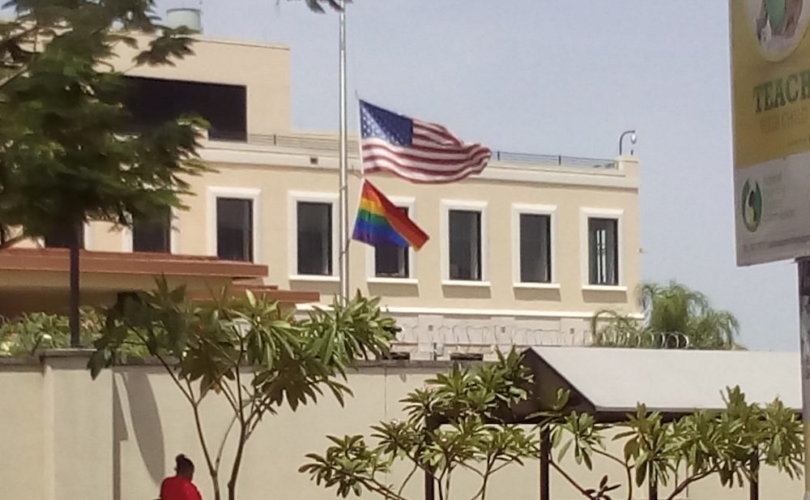 Courtesy of the Jamaica Coalition for a Healthy Society

KINGSTON, Jamaica, June 17, 2016 (LifeSiteNews) – The attorney general of Jamaica has used Twitter to sternly rebuke the U.S. Embassy for interfering in the country’s debate over homosexuality by flying the so-called rainbow flag at half mast to mourn the victims of the Orlando mass shooting.

Attorney General Marlene Malahoo Forte herself was criticized by social media and opposition critics for her Monday tweet, which stated: “I strongly condemn the #OrlandoNightClubShooting but find it disrespectful of Jamaica’s laws to have [the] #RainbowFlag flown here.” She added “#MyPersonalView,” making it clear she was not speaking for the government.

“I think it was most unwise for the attorney general to be commenting in a flippant way via social media on a matter as grave and sad as this involving another country and a massacre that has taken place there.”

Despite the fact these laws have brought down on Jamaica the condemnation of the European Union, Australia and the U.S., many Jamaicans took to Twitter wondering what laws Forte was referring to, as did the U.S. Embassy itself, with “@mmalahooforte we’re listening. Explain the legal reasoning? It [the Orlando shooting] was an attack of terror and hate, targeting the LGBT community!”

The Lawyers Christian Fellowship did the explaining in a news release: “The flying of the rainbow flag, a counter cultural symbol of a movement dedicated to undermining Jamaica’s buggery and marriage laws, sends an overt symbol that the United States embassy in Jamaica is aligned with those who would break our laws.”

The Jamaica Coalition for a Healthy Society also saw the rainbow flag as part of an ongoing campaign by the U.S. government to change Jamaican law. Its news release noted that “Article 41 of the Vienna Convention on Diplomatic Relations (1961), states that it is a duty for diplomatic agents of all signatory countries, including the USA and Jamaica, to respect the laws and regulations of the receiving State. They also have a duty not to interfere in the internal affairs of that State.’”

According to the coalition’s advocacy officer Philippa Davies, the American government had been engaging in “cultural imperialism” since last May when President Barack Obama’s special envoy for LGBT rights came to Jamaica secretly to meet homosexual activists. Though the U.S. government later apologized, embassy staff have since then collaborated with UNICEF staff in a program to train Jamaican youth in human rights activism aimed partly, said Davies, at decriminalizing homosexuality.

“Sexual orientation is not protected in our constitution,” Davies told LifeSiteNews.

The Jamaica Observer claimed in a story headlined “Marlene Retreats” that Forte had, in an interview with the paper, pulled back from her initial statement because she was “obviously stung by fierce public criticism.”

However, a careful reading indicates she stuck to her guns, first telling the Observer,

“The second part of my tweet has been misconstrued. The horrible act of terror which resulted in so many deaths can never be condoned. I condemn it unreservedly and repeat my expression of deep sorrow and sympathy for the victims and their families.”

But then she added, “Personally, I respect and celebrate our differences as people and see them as reflective of our humanity. Professionally, I’m sworn to uphold and defend the constitution and laws of Jamaica.”